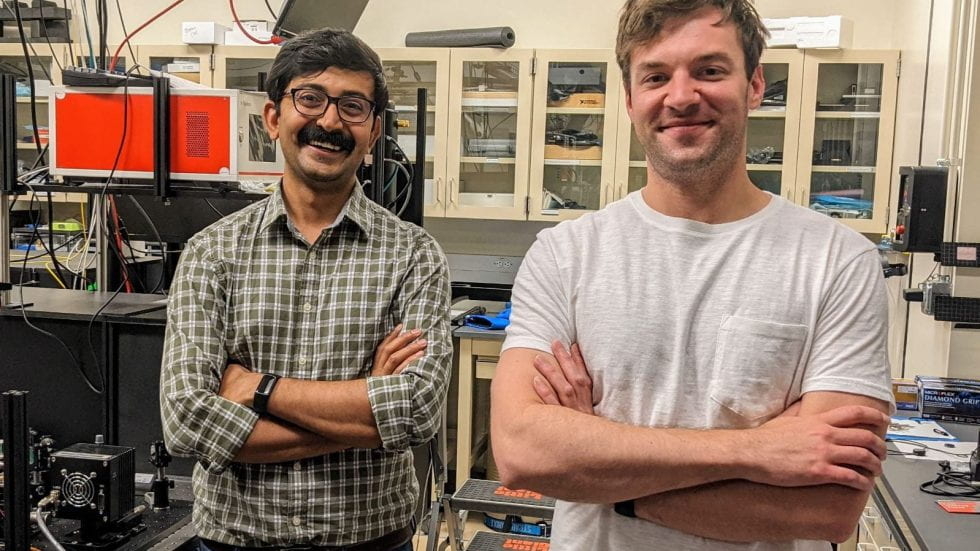 Advised by Guha, who also is a senior advisor to Argonne Physical Sciences and Engineering, Singh was among the first students in the country to receive a doctoral degree in quantum engineering, which emphasizes an interdisciplinary approach to quantum problem-solving that pulls together skills from chemical and materials engineering, applied physics, and nanofabrication. Now, the team is leveraging this collaborative mindset to drive commercial innovation.

Using Singh’s doctoral research as a starting point, memQ is producing semiconductor materials. The theory behind quantum memory has been studied by the physics community for years, but scalable, on-chip implementation of the technology has yet to be realized.

“Proof of concepts have been demonstrated, how we would go about storing it—the protocols are there. But the actual technology that could be used to store hundreds or thousands of qubits, that does not exist right now. That is to say, there is no equivalent of quantum memory today,” Singh explained. “Given that the physics was understood, the materials science challenge is what remained.”

Following several laboratory breakthroughs on the compatibility of titanium dioxide with qubit dynamics, memQ is working to address this challenge with the goal of developing commercially viable quantum memory units.

What makes memQ’s approach particularly appealing is its compatibility with current semiconductor technology. “In order to get to a thousand qubits on a single chip,” Singh explained, “you need to be able to leverage pre-existing technology. Our platform enables us to use the same technology that has been perfected over the past 40, 50 years in the semiconductor industry, now for development of devices that are directly useful in the quantum ecosystem.” By drawing from previous scientific knowledge, memQ has been able to more efficiently develop technologies that are viable with existing infrastructures.

The team is working with the backdrop of recent strides in quantum communication in the Chicago area, most notably the expansion of the now 124-mile quantum test loop in June. Quantum memories are necessary to establish connections between quantum computing and sensing nodes across arbitrary distances, so memQ’s technology may play a critical role in the long-term realization of quantum networks on this testbed.

“We come out of the Chicago ecosystem, and we share the vision that Chicago has the potential to become a major quantum hub because of the resources and talent available in the area,” said Singh. This perspective is at the heart of memQ’s partnership with Duality. “Duality became a no-brainer for us because it had the support, it had the resources, and it shares the same vision as memQ.”

A member of Duality‘s second cohort, the team members have already benefitted from connections with entrepreneurs and professionals as they transition their project from an academic research environment to commercial industry. Led by the Polsky Center for Entrepreneurship and Innovation and the Chicago Quantum Exchange, along with other founding partners, the University of Illinois Urbana-Champaign, Argonne National Laboratory, and P33, Duality in June accepted five startups from across the globe into the second cohort of the year-long accelerator.

“We’re currently hoping to accelerate the market discovery process and to learn from the mentor and business opportunities that Duality provides,” Singh said. “We’re now equipped with capabilities available in the larger ecosystem at Argonne, at UIUC, and at UChicago.”

Armed with these support channels, Singh is hoping to discover new markets for memQ’s technology in the coming months. “While we’re clear on the intermediate milestones, there is a lot of development that needs to happen. We’re trying to understand the ecosystem better, where can we provide value with this technology as we make our way towards this final product that we have in mind.”

Article by Madeleine Roberts, science writing intern at the Polsky Center. Madeleine is a third-year in the College studying physics and creative writing and has conducted quantum research internationally.