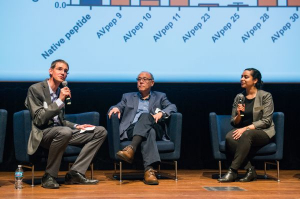 Scientists, faculty, entrepreneurs and researchers gathered at UChicago’s Microbiome Research Symposium on April 16 at the Logan Center for the Arts.

The symposium brought together experts from UChicago, Argonne National Laboratory and the Marine Biological Laboratory to meet with students, postdoctoral scholars, and early-career scientists to share their insights into the human microbiome, and its possibilities in treating disease.

The discussions focused on emerging and essential microbial methods.

A panel discussion hosted by the Polsky Center for Entrepreneurship and Innovation titled “Idea to Impact: Experiences in Commercialization of Microbiome Discoveries,” featured business leaders for startups AVnovum, Covira Surgical, and Seurat Therapeutics, explaining how they have leveraged Polsky’s resources to develop potentially lifesaving medical breakthroughs.

Another Polsky-incubated success story, Seurat Therapeutics, led by cofounder, president, and CEO Yuan Zhang, has raised $1.4 million, and aims to add more funding in the next year to continue preclinical development of a nasal spray to treat and prevent migraines.

In the lab, the company’s solution stopped the underlying cause of migraines by diminishing the cause of oxidative stress, which causes the brain’s neurons to over-activate and lead to headaches.

“We believe the (solution) will help migraine sufferers in both acute and preventive settings,” said Zhang, who received her PhD in molecular medicine, her master’s in translational medicine, and her bachelor’s in biological sciences from the University of Chicago.

The company has benefitted from $250,000 invested by UChicago’s George Shultz Innovation Fund; earned finalist status in the Polsky Center’s Edward L. Kaplan, ’71, New Venture Challenge; and has been awarded a $509,720 small business grant from the National Institute of Neurological Disorders and Stroke.

Though Zhang never set out to be an entrepreneur, she discovered that she enjoyed learning about the commercialization potential of a new drug. While a senior graduate student and postdoctoral scholar, Zhang actively participated in Polsky Center programs, both to gain hands-on experience conducting diligence on potential University of Chicago spin-outs (as a George Schultz’s Innovation Fund Associate) and to understand the market need for the new migraine prevention medication (through the NSF-funded Polsky I-Corps program).

The third Polsky startup featured on the panel was Covira Surgical. Covira’s solution is designed to render microbes unresponsive to stress molecules released by patients during stress which can stimulate their own bacteria from a state of relative harmlessness to disease producing pathogens. The hope is to prevent our normal flora from going rogue and becoming highly aggressive — and even lethal.

Kevin Lei, the business lead for Covira Surgical, who earned a PhD in immunology at the University of Chicago before joining Polsky as a full-time technology venture fellow, credited the Polsky Center with helping the company earn a patent to use Covira’s formula to treat anastomotic leaks, a serious infection at the intestinal wound site. The company also has two pending patents for the chemistry involved in making the compound and in using a separate compound.

Polsky’s Matt Martin, MBA ’18, who moderated the session, discussed the work he is doing to support microbiome-based research with the Polsky Life Sciences Launchpad.

The role of the new Life Sciences Launchpad program is to serve as a kind of “cofounder” alongside faculty members for new business ventures, and to work closely with them throughout the launching and early operation of their companies.

The work has only just begun, Martin said. “We intend to not only see these kinds of success stories, but continue to scale up and have a bigger impact,” he said. “We are still at the early stages of developing companies and the community of life sciences talent, as we’ve seen here.”

Judy Prasad, a Polsky technology venture fellow who is helping AVnovum spin out of the university and operate successfully on its own as part of the Polsky Life Sciences Launchpad, participated in a fireside chat with cofounder, Dr. Eugene Chang, the Martin Boyer Professor at the Department of Medicine.

Chang, who discovered the fungal-fighting compound, said AVnonum would not exist without the help of the Polsky Center.

“I want patients to benefit from our discoveries, and this is where the partnership with the Polsky Center has been so valuable,” Chang said. “They really enabled us to launch AVnovum.”

Indeed, AVnovum sees a market potential of $1.2 billion, helping keep microbes from succumbing to stressors that cause them to turn virulent in patients such as those taking chemotherapy or undergoing transplant surgery. The helpful microbes that morph into attackers can cause serious illnesses, such as bloodstream infections.

The company is now seeking seed funding for future research. Its ultimate goal is to develop compounds that can be turned into drugs.

The Microbiome Research Symposium would not have been possible without the support of the Duchossois Family Institute.