Launched in 1996, the Edward L. Kaplan, ’71, New Venture Challenge (NVC) is recognized as one of the top-ranked accelerator programs in the nation. Through the NVC, the Polsky Center has graduated more than 330 startup companies and created thousands of jobs for the economy. NVC startups have raised more than $1 billion in funding and achieved more than $7.5 billion in mergers and exits. Companies launched through the NVC include household names such as Grubhub, Braintree/Venmo, and Simple Mills. The Rattan L. Khosa First-Place Prize, in addition to other specialized prizes and awards, are announced at the Polsky Innovation Showcase immediately following the finals.

Join the conversation on social media using the hashtag: #ChicagoNVC.

Congratulations to Pippin Title, winner of the 2020 Edward L. Kaplan, ’71, New Venture Challenge! Pippin title set a record after securing $450,000 in total funding, which includes $150,000 from the Rattan L. Khosa First-Place Prize, as well as additional funding on behalf of the judges and $50,000 from OCA Ventures. Pippin Title is a one-stop-shop for land title reports and eliminates operational hassles for title insurance agents, allowing them to focus on serving homebuyers better. Team members include: Bharat Das, Emily Doubilet, Lucy Hu, Omar Naseef, Slava Nor, Bassel Said, and Dominic Vallosio. 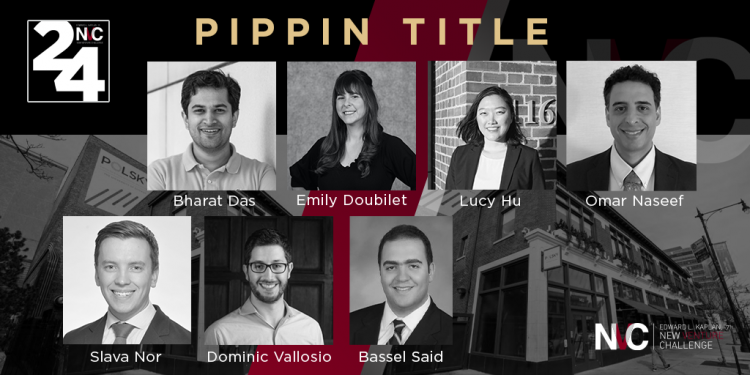