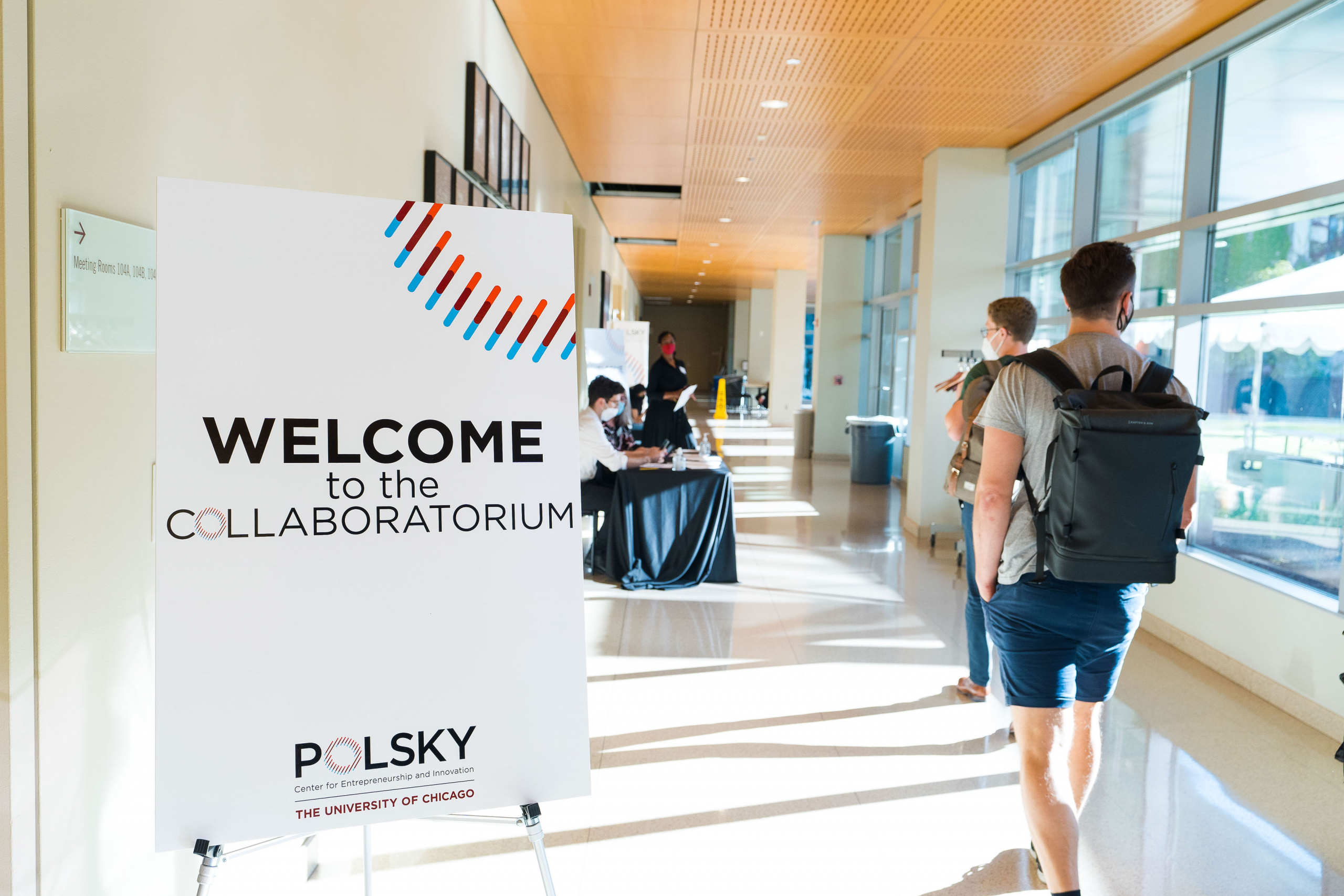 For entrepreneurial students at Chicago Booth, one of the seminal events to kick off the academic year is the Polsky Center’s Collaboratorium, where scientific minds collide with business brains in hopes of finding a match made it startup heaven.

At the semiannual event last week, an in-person affair for the first time in two years, students filled every seat in a Harper Center classroom, and more tuned in over Zoom, to watch seven budding startups present the ideas and technologies for which they hope to find commercial opportunities. 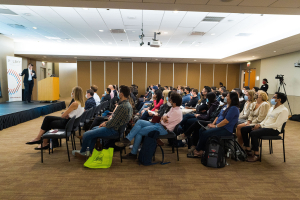 The startups — founded by University faculty, staff, and researchers in the biological, physical, behavioral and molecular sciences — have the know-how and ambition to make better medical devices, diagnose unhealthy microbiomes, improve image resolution, and more. What they lack, and hoped to find through the Collaboratorium, are team members with robust business expertise to help them find, define and tap into a market for their products. 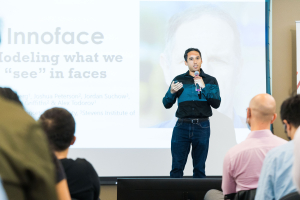 Innoface cofounder Stefan Uddenberg, a postdoctoral researcher at Booth working under behavioral science professor Alex Todorov, said during his presentation that he is seeking “non-dystopian and viable” commercial uses for his face-manipulating technology.

Uddenberg, who studies social perception, built the face modeling tool to aid his research into the unconscious inferences people make about others based on their facial characteristics and expressions – for example, how trustworthy they are. It can generate hyper-realistic faces and manipulate images of actual faces to reflect certain social traits.

During a networking hour following the presentations, a crowd of students gathered at the Innoface table and peppered Uddenberg with possible uses, which he jotted down along with the students’ names so he could connect with them later in hopes of finding a good fit for his team. 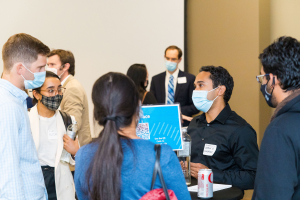 Of the dozen ideas he recorded, half he had already thought of himself, including one he believes is most viable and ethical: selling or licensing the technology to advertisers to use to better target their audiences.

But several students suggested an interesting use case he hadn’t thought of before: plastic surgery.

“It made me think of more medical applications too,” Uddenberg said later. “It could be a health application. You can gain some kind of non-zero information about how healthy someone is by taking someone’s picture.”

Many students attend the Collaboratorium hoping to find a startup to join.

Anna Jacobs, a first-year Booth student, went with an open mind and an interest in healthcare. After several years in medical school, Jacobs decided to go to business school to improve the healthcare system, but wasn’t sure what shape that might take. 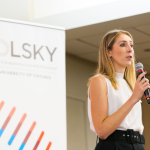 She was struck by the presentation by Inclusive Health, cofounded by Monika Lach and Dahlila Sultan of the specialty pharmacy at UChicago Medicine, which is developing a digital comprehensive care solution for transgender individuals and other members of the LGBTQIA+ community. Jacobs had noticed the inadequacy of care for that population during her clinical experiences at medical school.

“It is a perfect combination of medicine and how to improve patient care,” said Jacobs, who went directly to the Inclusive Health table after the presentations to express her interest in joining its team. 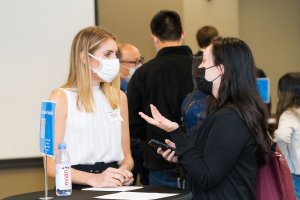 Other students attend the Collaboratorium for inspiration, or to dip their toes into Booth’s entrepreneurial community.

Cindy Balaji, who plans to go through the Edward L. Kaplan, ’71, New Venture Challenge with her own startup, a dating app, was curious to see how other founders pitched their ideas.

Abhiram Bhalerao, a first-year Booth student with a venture capital background, said his goal isn’t to join a team but to mentor businesses and potentially help them find investors.

“They are extraordinarily open to feedback and discussing their ideas,” he said of the startups. 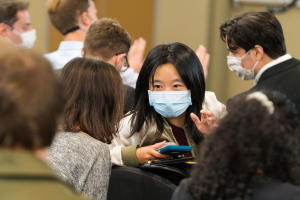 Adrian Cordovy y Quiroz, a software engineer and part-time Booth student, is developing his own startup, a travel and social media platform to encourage people to connect over purposeful travel. But he lingered at numerous tables at the Collaboratorium to learn more about their ideas.

He was drawn to Innoface because his first project out of college was on facial recognition software at construction sites to track worker hours and improve security. He also was intrigued by a startup making accurate 3D printed models of patients’ tumors, which doctors could use to explain the disease and treatment options or that patients could have as a keepsake, because of his own grandfather’s experience with cancer.

“I wanted to see what others are working on,” Cordovy y Quiroz said. 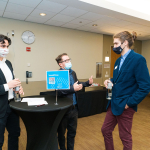 Paul Mayer, a part-time MBA student, said he chose Booth because of the Polsky Center, and attended the Collaboratorium to see what its programming is like.

Mayer intends to create his own accelerator for space-faring technology, to de-risk investment in an area critical “for survival of the human species” but currently “at the mercy of eccentric billionaires.”

Mayer, a systems architecture engineer, said he was impressed by the startup presentations at the Collaboratorium because the founders are endeavoring to solve intractable problems.

“I came to meet people and get an example of what Polsky offers,” Mayer said.