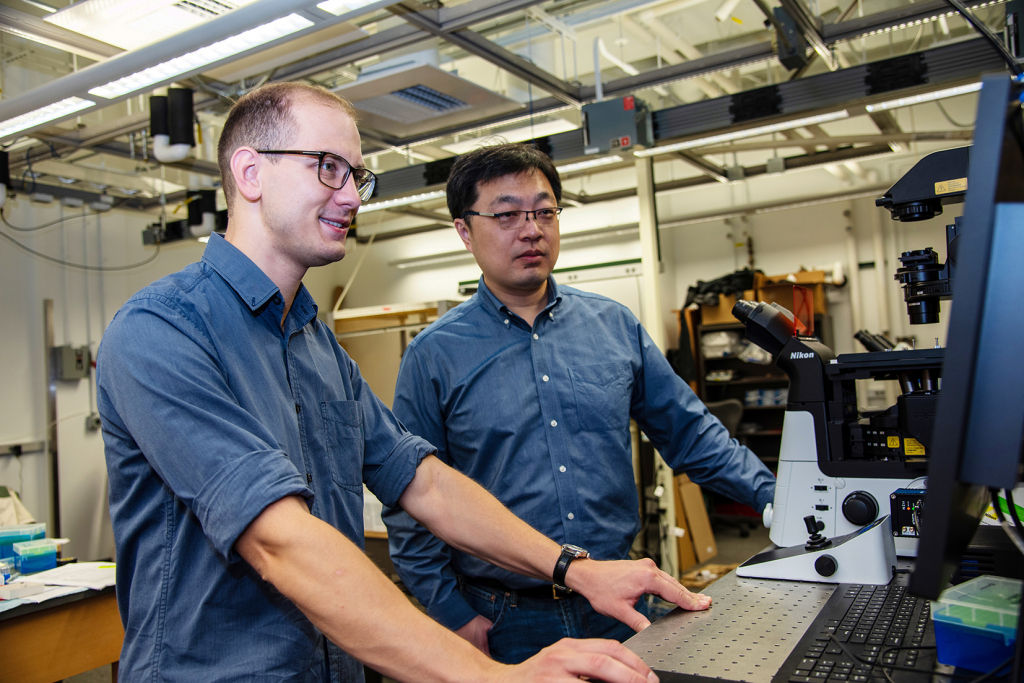 A team of University of Chicago scientists, led by associate professor Bozhi Tian, have pioneered a new technique that harnesses the power of light to stimulate various cells and tissue – an approach that has a range of applications in healthcare.

Several disease-treating devices rely on the electrical stimulation of neurons to treat diseases, such as Parkinson’s. However, the use of these devices is often high risk, as it requires either surgical implantation or permanent gene editing.

Proposing a less invasive technique, Tian has developed an approach for designing semiconductor-based structures that when activated by light, initiate a response that can be targeted to specific cells. Using this approach, he has developed free-standing silicon nanomaterials to activate individual cells and a silicon mesh that can modulate electrical activity in organs.

“There is a range of applications that you can envision for this type of system,” said Tian, who is working with the Polsky Center to commercialize the technology for which he has filed several patents.

One example is a neuromodulation device, which could be implanted in the brain to treat various neurological disorders. The researchers are exploring its use as an alternative to the traditional pacemaker, as well. Studies in animal models have demonstrated that the device can induce movement in limbs of a sedated rat and induce heartbeat of a specific frequency.

Tian said they also are able to control microbial activities, like bacteria, which has applications such as biofilm dispersal – a process that plays an important role in the transmission of bacteria. The hope is that the technique could be used to remove bacterial infections, and the research suggests this is a possibility.

Additionally, in cell culture studies, the researchers were able to stimulate individual neurons as well as T cells, a type of white blood cell that plays a central role in immune response. Though the work is in the early stages, the results are encouraging as they look to further examine the technique’s potential role in cancer treatment.

From its start in 2012 when Tian joined the University of Chicago, the lab continues to make significant progress and is today exploring the use of different semiconductor materials. While silicon is a key element used in microelectronics and computer chips, Tian noted there are some drawbacks to the material, such as being biodegradable.

“For certain applications where you need a transient implant or temporary treatment, silicon is a great material – but if you want some electronic implants for long term, you really need a more stable semiconductor,” he explained.

As an alternative, the researchers are exploring the use of silicon carbide, a more stable material that would still allow for electrical or optical stimulation. “There are many opportunities down the road, especially when these building blocks are configured into tissue-like materials,” said Tian. “I’m extremely optimistic about the platforms.”

Tian is among several University of Chicago researchers showcasing their work at Illinois Ignite 2020 later this month. Pre-recorded presentations will be posted on September 24, 2020, and will remain live until October 9, 2020.