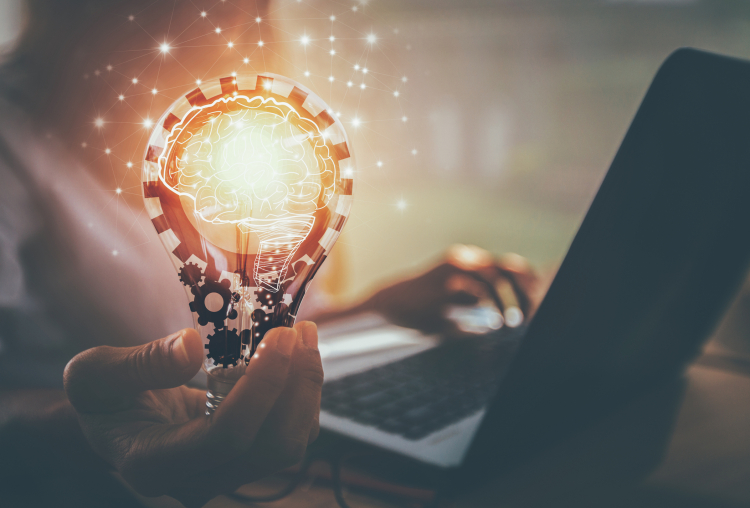 Illinois university students and faculty set records for startup activity – raising approximately $1.42 billion over the last five years, according to a recent report.

The organization this week released its 2020 report during a presentation featuring speakers from the various universities, including Jay Schrankler, the associate vice president and head of the University of Chicago Polsky Center.

Per the report, university students and faculty founded a total of 1,064 startups over the last five academic years (2014-2019) – the largest number recorded by the index and the first time more than 1,000 companies were formed during a five-year period. 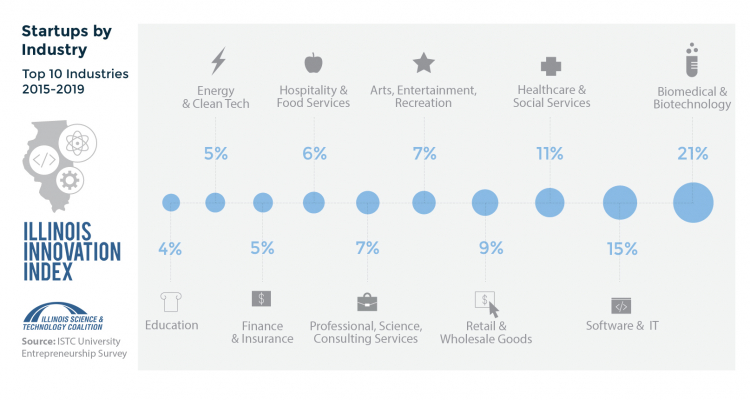 “This is really tremendous growth,” said ISTC Director Matthew Bragg.  “Startup activity continues to climb and has climbed as long as we’ve been tracking this.”

Of these more than 1,000 startups, nearly 60% are still active or have been acquired. Additionally, more than one in five are in the biotech industry. Healthcare-related startups – those working in biotech, healthcare, and social services – account for more than one-third of all university spin-outs.

At UChicago, this includes NowPow and PhysIQ, which were featured in the presentation for their work supporting various efforts to combat the COVID-19 pandemic.

Biotech startups, which require more capital to get off the ground, also raised more funding than all other industries combined from 2015 to 2019.

“Another new record for startups coming out of our universities in this state – around 40% of our university-born startups raise money,” said Bragg. For the last five years, this number totaled $1.42 billion. Of those that have raised money, more than two-thirds remain in Illinois. 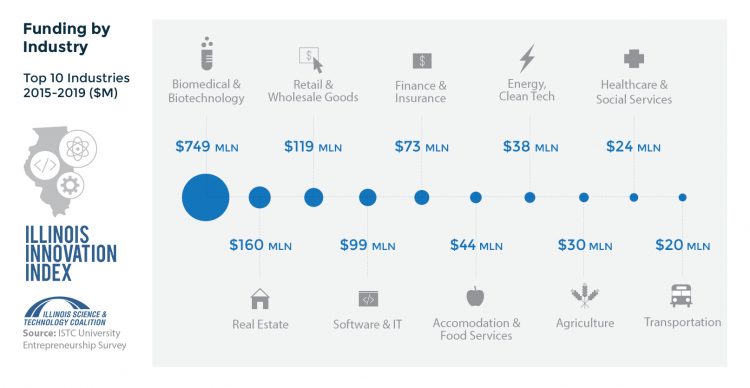 However, there are issues that still need to be faced as a community, said Bragg. The first, from an economic development standpoint, is the exodus of companies from the state. Per the report, half of the startups that raised more than $5 million are now located outside of Illinois. “We are still losing too many of our true runaway success startups,” said Bragg.

Without access to a startup visa, the state also is losing foreign-born founders, who accounted for an estimated 39% of founders or co-founders over the past five years.

“Quite a few founders abandon their startups to seek employee sponsorship, or take their startup and leave the country,” explained Bragg.

At Polsky, the I-Corps program was launched in 2014 to support UChicago scientists, researchers, and students to test the commercial potential of their research and ideas. The program is supported by funding from the National Science Foundation (NSF) and is designed for participants working on STEM-related projects.

“Looking forward, we’ve seen how important SBIR is to how viable startups are and being able to retain them in the state,” said Bragg, noting that ISTC is working to set up an SBIR matching program in Illinois. 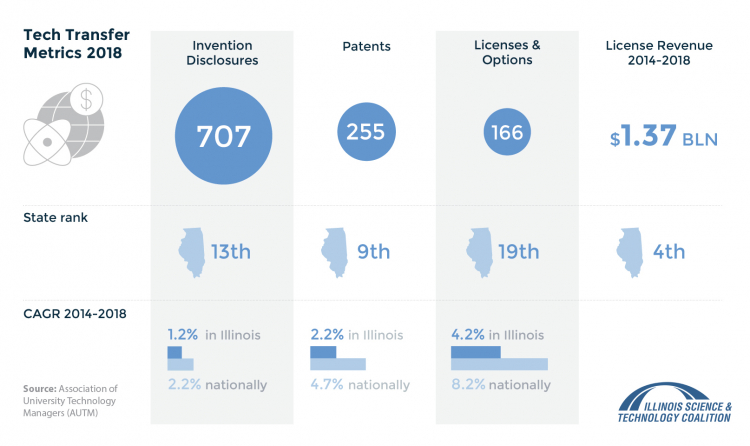 Looking at these numbers, Bragg noted that it is quality over quantity. “We punch below our weight and quite frankly haven’t grown quite as quickly as some of our peers,” he said, “but licensing revenue from this activity is nearly $1.4 billion over the past five years, which ranks fourth nationally.”

Said Bragg, “While quantity might not be here, the quality of this IP is really showing through with the way the market is validating it.”