The digital health company physIQ is using FDA-cleared artificial intelligence-based analytics to analyze data from COVID-19 patients and those at high risk of exposure. 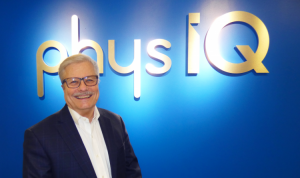 A Chicago Booth alumni and past participant in a George Shultz Innovation Fund investment round, Gary Conkright is the CEO and co-founder of the Chicago-based company, which is using its experience in the industrial equipment monitoring industry to monitor patients.

Last week, physIQ, the Department of Defense (DOD), and The Henry M. Jackson Foundation for the Advancement of Military Medicine, in conjunction with the Joint Program Executive Office for Chemical, Biological, Radiological and Nuclear Defense, announced the launch of a program through which physIQ’s pinpointIQTM platform will be used to collect and analyze wearable sensor data to better understand the coronavirus (COVID-19).

According to the company, COVID-19 patients and those at high risk of exposure will be continuously monitored using a clinical-grade biosensor, with physiological data sent data in real-time to physIQ’s cloud-based platform. This information will then be analyzed using advanced FDA-cleared artificial intelligence-based analytics.

“We need to build a base of knowledge,” said Conkright, speaking to a lack of understanding about how COVID-19 progresses. “The work we’re doing right now is to help clinicians and scientists understand how a patient’s physiology evolves from exposure to infection and working through the recovery.”

In the press release issued last week, HJF’s Director of the Austere Environments Consortium for Enhanced Sepsis Outcomes (ACESO) program, Dr. Danielle Clark, said the goal is to develop a suite of technologies, “including physiologic monitoring to identify patients at risk of progression to severe disease, detect infection prior to symptom onset, and ultimately guide clinical decisions.”

“We plan to track thousands of patients and high-risk contacts, as well as front-line healthcare workers,” she said. “It is critical that we have tools to differentiate those who should self-isolate at home from those who require hospitalization.”

Supported by the Office of the Assistant Secretary of Defense for Health Affairs with funding from the Defense Health Agency, the program – which will initially involve US-based military hospitals as well as international sites in Southeast Asia – builds off physIQ’s experience with monitoring Ebola patients through a USAID/CDC sponsored program a few years ago.

“Rather than going into the quarantine area and taking a vital every two hours in full PPE, doctors only had to go in every six hours. Vital sign collection was automated from outside the tent,” said Conkright, speaking to the company’s work in Sierra Leone. “Our analytics also were used to identify patients who were on the cusp of crashing, so doctors could go in and preemptively take care of them

This on-the-ground study proved that the technology worked, that patients tolerated the wearable biosensors, and doctors and nurses found the information clinically relevant and actionable, said Conkright, noting that it also decreased exposure rates and provided a higher level of care.

Tech Transferred: The Past and Future of physIQ

Working in collaboration with the Argonne, the UChicago technology transfer office (now the Polsky Center) reached out to Conkright in 1999 for guidance on what to do with eight of its patents.

Conkright quickly realized the potential of the technology – and with venture capital backing, formed SmartSignal, which used the technology to monitor mission-critical industrial assets across various industries. Still, Conkright said he always believed the highest and best use of the AI technology was in healthcare, and he, the CTO, and CSO spun out a slice of the technology to form physIQ.

“The really unique approach here that is transformational, is that this technology allows you to build a personalized model or fingerprint of how a system that you want to monitor is behaving,” said Conkright.

“It doesn’t make a difference if it’s a human body or a jet aircraft engine – if you have the data it can learn how that system is operating and then detect when it starts behaving differently.”

The idea was that if this technology could be applied to vital signs – measuring of physiological function – then it could detect if a patient’s health was deteriorating to the point where they are going to need hospitalization or a new drug therapy, explained Conkright. “How SmartSignal enabled proactive maintenance, physIQ’s goal is to enable proactive healthcare,” said Conkright. With this thesis, Conkright went back to UChicago and teamed up with Dr. Martin Burke, who at the time, was the interim chair of cardiology.

Using their own funds – and a “Rude Goldberg-type” wearable developed in-house – the company, at the time called VGBio, worked with Burke to conduct a small study in congestive heart failure patients at the UChicago Medical Center. This ultimately showed that the technology could be applied to human physiology: “You could build a model of the patient, even when they were not in perfect health,” Conkright said.

In January 2011, physIQ was awarded a $2 million development contract from the Veterans Administration (VA). With these funds, the team built a “more hardened” wearable and ran a clinical study at the VA. Later that same year, the company participated in the George Shultz Innovation Fund investment round, through which they brought in $75,000 to support another study at UChicago, which Conkright said helped augment the work and show that the technology “absolutely” worked.

Building upon the success of the initial VA grant, a second grant from the VA was received to begin a study monitoring 100 veterans out of four facilities. Last month, the results of that study were published by the American Heart Association. Per the report, the AI-based analytics were shown to provide 10 days of advance notice that a patient was on a trajectory that would lead to hospitalization.

While 85% of the company’s work currently is in the clinical study area, Conkright expects a greater amount of its business will move into the healthcare delivery area. “The clinical study people are saying this is how every clinical study in the future is going to be done,” he said. “The general consensus is that virtual care and virtual clinical trials leveraging biosensors and AI is the new model.”

// Where Are They Now? is a column featuring past program participants, investment recipients, and others who have worked closely with the Polsky Center.

Have your own story to tell? Email >> Melissa Fassbender

tech commercializationphysIQCovid-19wearablesmhealthWhere are they now