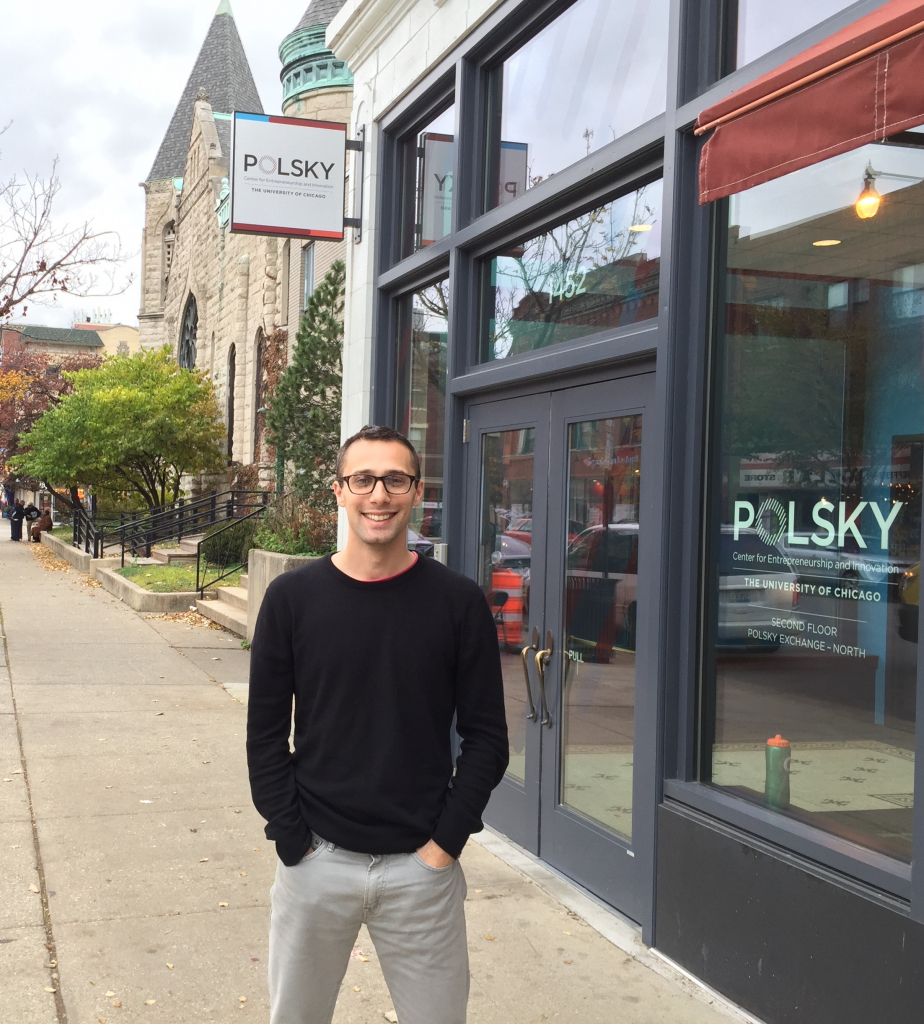 BrewBike cofounder and CEO Randy Paris, MBA ’18, in front of the Polsky Center.

Conventional wisdom would lead most people to conclude there’s a coffeehouse on every corner, whether it’s a Starbucks, an Intelligentsia or a Dunkin’ Donuts.

When living in Chicago’s Loop, Paris couldn’t find a decent cup of iced coffee on his way to work in the West Loop.

“Every morning, I needed my coffee. And I quickly realized, it was way too hard to get a cold coffee easily,” said Paris, 30, a Pittsburgh native who earned his political science degree from Wake Forest University and worked in the Obama White House from 2011-2015.

A Google search turned up a potential solution — BrewBike, a startup at Northwestern University that sells cold-brew coffee from custom-made cargo bikes that double as coffee stands.

“I thought, ‘That’s so much cooler than [conventional coffee shops],’” Paris said.

So Paris initiated a meeting with BrewBike’s founder, Lucas Philips, then a junior at Northwestern who had planned to keep the company going in perpetuity on the Evanston campus.

“I said, ‘Let’s put together a real game plan that could take this to the next level,’” said Paris, now CEO of the company spearheading its expansion in Austin, Texas.

BrewBike won critically important momentum with its acceptance into the Wildfire pre-accelerator program at The Garage, a Northwestern effort to boost startup teams by providing resources and coaching. That initial success gave Philips $10,000 and a summer to work on BrewBike’s next steps.

“We realized early on that you can’t operate a bike year-round because Chicago’s gets really cold very quickly,” Paris said.

So BrewBike set up a small coffee shop inside Northwestern’s Annenberg Hall.

Then they applied for and won entry into NVC, which put the BrewBike team through a Shark Tank-like series of challenges.

The result: Paris and Philips developed a well-curated pitch for the company and became adept at answering questions and talking about BrewBike’s business model, competitors, marketing plan, human capital, go-to-market strategies and other details.

“If you approach it the right way, you end up with a legitimate business plan,” Paris said.

Paris credits the duo’s experiences at Northwestern and the University of Chicago with bringing BrewBike to fulfillment, and to helping it gain critical investment capital. 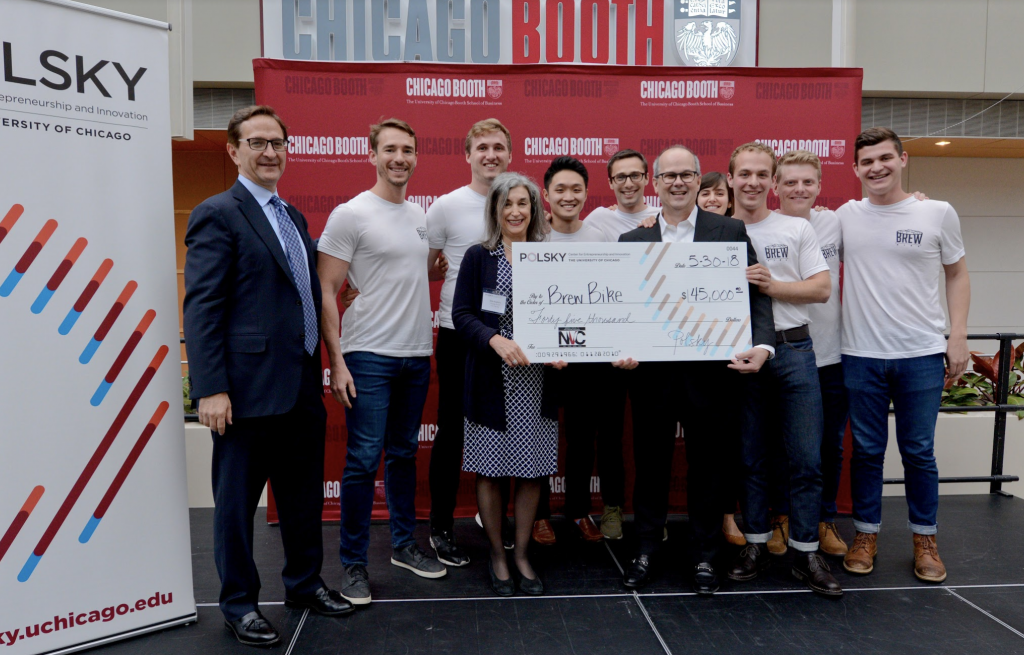 “There are 100 ways [in which] Northwestern was integral to BrewBike being born and raised,” Paris said. “And it couldn’t have grown up without the University of Chicago, the Polsky Center and the New Venture Challenge.”

The differentiators that BrewBike developed during the New Venture Challenge include new and improved bikes, the strategic design of BrewBike’s retail shops, a plan for subscription services, pricing, and how college students can be leveraged as brand ambassadors to manage the company’s growth at different campuses around the country.

“We would help each college or university’s BrewBike by enabling students to learn what it takes to run a real business,” Paris said. “When the campus director graduates, we will want him or her to hand the BrewBike business to another student.”

The first-seed round investors include the two universities, as well as Matt Matros, founder of Protein Bar eateries; Deborah Quazzo, the managing partner of venture capital firm GSV AcceleraTE; Venetia Kontogouris, the former managing director of Trident Capital, and European entrepreneur Mats Lederhausen, managing director of McDonald’s Ventures, a member of RedBox’s founding team and founder of growth capital firm BeCause, aimed at investing in companies with high prospects for both profits and doing good.

Paris credits his experience heading his undergraduate alma mater’s “Students for Barack Obama” club and his internship and work for Obama, with giving him the vision to live out his dream.

“Working at the White House with Barack Obama: No one will be able to explain in words what that’s like,” he said. “We all just wanted to have eight years of great, passionate work to move the ball for the American people. We did our job.”

“I took from [Obama’s advice] that it’s OK to want to go out and try to change the world,” Paris said. “In fact, it’s a really very, very, very fun thing to do.” 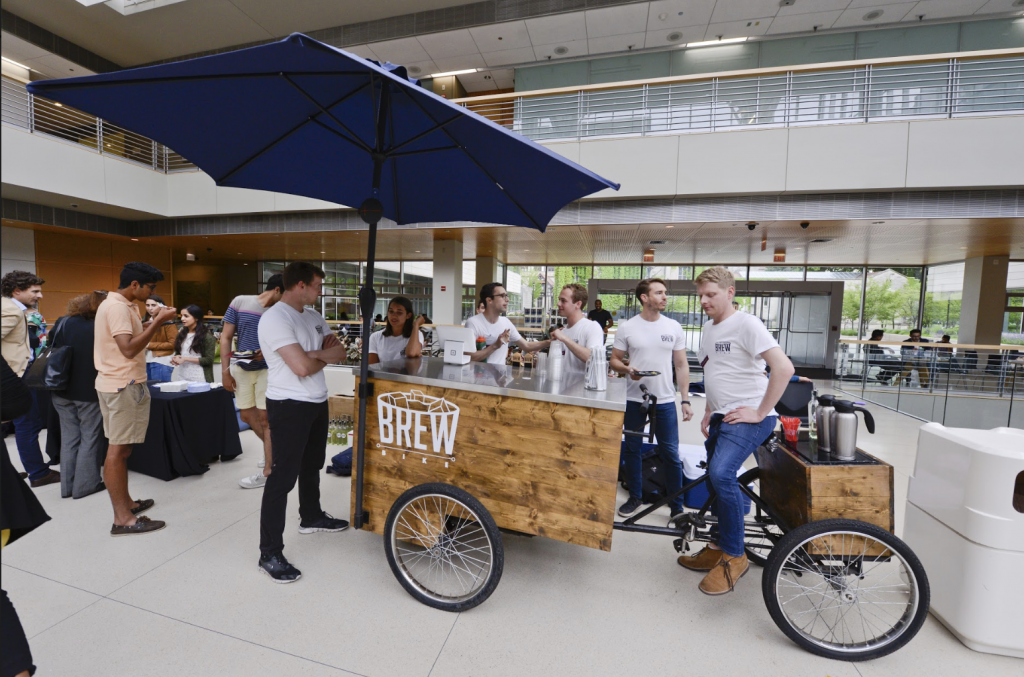 The BrewBike team sampling their coffee at Chicago Booth during the NVC Finals.