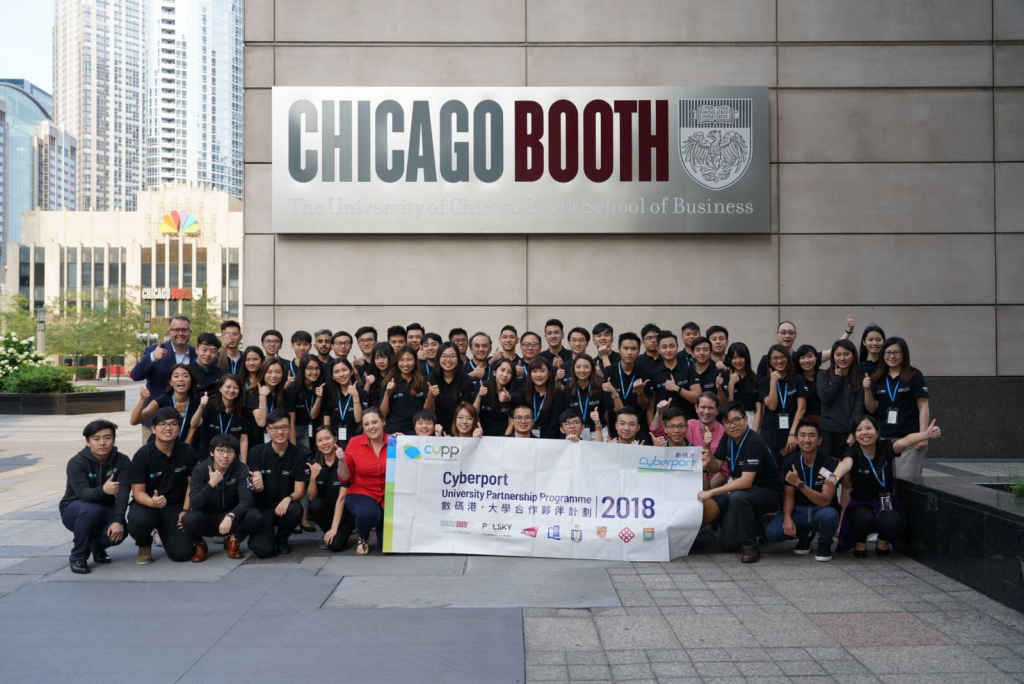 In August, fintech startup companies from Hong Kong visited Chicago Booth for a week of immersion in the Chicago start-up ecosystem.

In July of 2013, the University of Chicago Booth School of Business announced plans to move its Executive MBA program in Asia from Singapore to Hong Kong. At around the same time, Braintree, a payment processing platform that took home first place at the Polsky Center’s 2007 Edward L. Kaplan, ’71, New Venture Challenge, was acquired by tech giant PayPal.

And excitingly, these two worlds recently had the opportunity to come together in a big way. Nineteen fintech startups comprised of 56 Hong Kong university students visited Chicago Booth’s Hyde Park campus in late August for a week of immersion in the Chicago start-up ecosystem. The excursion was a part of this year’s installment of the University Partnership Programme (CUPP) from Cyberport, a Hong Kong-based Fintech incubator. As part of CUPP, every two years, Cyberport partners with a prominent American university to offer its student participants a chance to explore the Fintech start-up ecosystem in the United States.

Chicago Booth secured this year’s American end of the Cyberport CUPP contract through the Polsky Center’s program proposal that offered a plethora of resources to prepare students for global success. Polsky and the Chicago Booth Executive MBA office devised a week of programming and networking for CUPP’s young founders to gain insight into building a successful business.

First on the students’ itinerary was a series of lectures and activities led by some of the Polsky Center’s biggest names and entrepreneurs. Among the presentations given were “Understanding the Competitive Landscape” by Polsky executive director Starr Marcello, AM ’04, MBA ’17  “Entrepreneurial Marketing and Sales” by SaaS entrepreneur Phil Leslie, MBA ’09, and “Creating a Product Development Plan” by Polsky senior associate director Will Gossin.

【數碼港．大學合作夥伴計劃 孕育未來精英】「數碼港．大學合作夥伴計劃」2018選擇到美國第三大城市芝加哥，學習有關金融科技創業嘅知識。芝加哥擁有龐大金融體系，亦有唔少初創企業值得大家借鏡。各大學生喺是次計劃中，到訪世界著名大學芝加哥大學布斯商學院及Polsky Center for Entrepreneurship and Innovation，參與為期一星期嘅創業營。學院內嘅導師及教職員，教授內容非常廣闊，包括不同種類業務模式、推廣策略、創業教育體驗等等。課堂中有各種練習，亦有討論環節，令到氣氛更加互動。而行程中，各位學生更加親身到訪在芝加哥著名嘅機構及初創企業，令到各學生喺知識上當然有所增長、視野亦更加廣闊。嚟緊10月23日，數碼港會舉行演示日，各學生到時就可以將初創理念同所學嘅知識，喺各評判面前表達出嚟！【Cyberport University Partnership Program Nurture Future Elite】With large scale of financial institutions and start-ups worthy of note, Chicago is the city “Cyberport University Partnership Program” (CUPP) 2018 has chosen to visit this year. Students can study and focus on the entrepreneurship in FinTech.The students have participated in a Boot Camp hosted in world-renowned the University Of Chicago Booth School Of Business and Polsky Center for Entrepreneurship and Innovation. During the week of the Camp, the mentors from the University have taught a wide range of knowledge, including different Business model, marketing strategy, entrepreneurship education experience, etc. The exercise and discussion sessions in the class have created an interactive atmosphere. Also, the students have visited some of the famous #FinTech, so that surely they can learn from the wisdom and widen their horizon. Cyberport will host a Demo Day on 23rd October, students can present their start-ups ideas and knowledge to all the judges. #Cyberport #CyberportCommunity #CUPP #Chicago #CyberportFinTech #CUPP4FinTech University of Chicago Booth School of BusinessPolsky Center for Entrepreneurship and InnovationCity University of Hong KongThe Chinese University of Hong Kong 香港中文大學 – CUHKHong Kong Baptist University – School of BusinessThe Hong Kong Polytechnic UniversityThe Hong Kong University of Science and Technology – HKUSTThe University of Hong Kong – HKU – 香港大學

The judges were wowed by a wide range of companies that all fit nicely under the fintech umbrella. On the financial end of the spectrum, they heard from companies like BitExTract, a consolidated cryptocurrency analysis database, and GameChangers, a tool to expedite the convoluted cryptocurrency auditing process. And on the consumer-tech side, judges heard from the likes of FinFarm, a Farmville-esque learning platform for elementary and middle school students, and WWOD, a new “financial guardian angel” that prevents impulse spending. At the end of the event, the students had a chance to network with the judges, potentially fulfilling many of their pitch “asks” on the spot.

The students’ week culminated with a day of site visits to established fintech companies in downtown Chicago. Participating firms included investment research firm Morningstar, credit reporting agency TransUnion, tech consultant Capgemini, and aforementioned Venmo, among others. The students noted this experience as one of the most memorable from their trip to Chicago and within the summer-long accelerator program in which they participated at Cyberport’s campus in Hong Kong. This notion was echoed by senior leadership of the program from Cyberport as well.

“The thing which I think is most important is the experience [the students] can get from this journey,” said Dr. Toa Charm, Cyberport’s chief public mission officer. “They interact with the speakers here, the companies here, and the culture in the United States. In the future, there will be a lot more collaboration between the students and the United States, particularly in Chicago.”

While the fintech program in Hong Kong has certainly been a success, it represents only a part of Chicago Booth and Polsky’s participation in the Fintech space and their greater presence abroad. When it comes to global outreach, Chicago Booth and the Polsky Center hope to cement themselves as a hub for impact and innovation across Asia – goals that align well with Cyberport’s mission as well. “We’re not building one company; we’re building an ecosystem for Hong Kong,” added Dr. Charm, who attended college and graduate school in the Midwest before beginning his career in Hong Kong. “This partnership is unique,” he continued, “because of the connections that come with the partnership for both sides. Hopefully we can learn from Chicago Booth and they can also tap into our ecosystem.”

Learn more about the Polsky Center Fintech Program, and more ways you can get involved.