A new UChicago research-backed mortgage offering may soon be hitting the housing market, and with it, comes hopes for a more stable and positive relationship between borrower and lender.

The Polsky Center for Entrepreneurship and Innovation has recently invested $200,000 in fintech startup Safe Rate through the UChicago Innovation Fund, adding to the Fund’s previous spring cycle investment in BiomeSense immediately following the Innovation Fund Finals in late May. 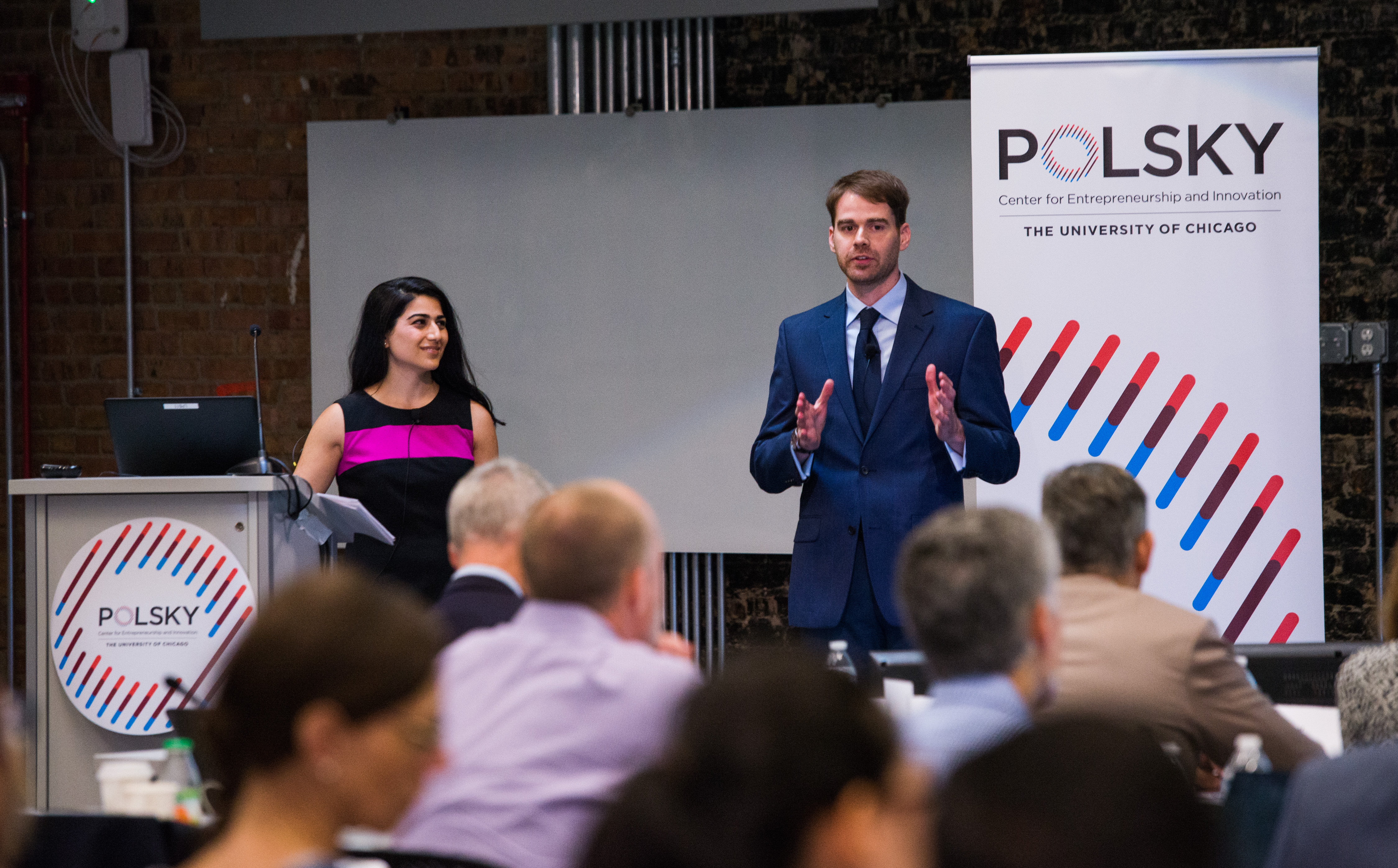 The Safe Rate team presents their plan May 31, 2018, during the 2018 UChicago Innovation Fund Finals at the Polsky Center. (Photo by Jean Lachat)

Safe Rate is a new mortgage product for low down payment borrowers that reduces monthly payments in times of housing market distress. The Safe Rate mortgage has the power to reduce foreclosures, stabilize communities, and enhance returns for mortgage investors. Safe Rate, which was founded by Dylan Hall, MBA ’13 and Shima Rayej, MBA ’13, is modeled off the research of Chicago Booth professor Amir Sufi, as published in his book, House of Debt. Hall, who worked for Teach for America before coming to Booth, served as a research assistant for Sufi’s book

“Professor Sufi’s research told the story of what I saw firsthand as a teacher in West Garfield, particularly with the subprime lending crisis and how neighborhoods were devastated from multiple households drowning in debt,” said Hall.

House of Debt, coauthored with Princeton University professor Atif Mian and described by economist Larry Summers as “possibly the most important book to come out of the 2008 financial crisis,” depicted the causal similarities between the Great Recession and the Great Depression. It illustrated how both were caused by a large run-up in household debt, followed by a significantly large drop in household spending. In their book, Sufi and Mian propose a new type of mortgage – one that is built on the principle of risk-sharing, and one that Hall and Rayej have been commercializing since 2014.

“We took the idea that Professor Sufi came up with, then spoke with nearly 1,000 people in the mortgage industry,” said Rayej. “Loan originators, investor servicers, guarantors, hedge fund managers, private equity investors – we spoke with almost every kind of person or entity that touches a mortgage so that we could really iterate on a product, with feedback from Professor Sufi, that resonates with borrowers and can also be adopted by the mortgage industry at a larger scale.”

“Safe Rate has found a market-driven way to align incentives between the homebuyer and financial institutions,” said Jason Pariso, director of the UChicago Innovation Fund at the Polsky Center. “The homeowner gets the same mortgage at the same if not slightly better rate, but has downside protection, and the investors get an exciting new product with higher potential returns. It’s a win-win for the marketplace.”

While Hall and Rayej have been working on commercializing this idea since 2014, it was just this past spring that they decided to take Safe Rate through the UChicago Innovation Fund – an experience they found transformative after their time in other popular accelerators.

“Traditional investors always saw us as a little too early, and we couldn’t find anyone who could get past that and help us make this product a reality – until the Innovation Fund,” said Hall. “Midway through our Innovation Fund cycle, we were forced to look back at the research we had done over the past four years, and we reexamined our learnings and ultimately altered our product. We got direct feedback from the Innovation Fund team, and were given the resources to combat any uncertainty.”

Pariso, who worked closely with Safe Rate throughout the Innovation Fund cycle, credited the strength of the team as the reason they were able to make this alteration to their company and still find success and receive funding.

“Dylan and Shima discovered a better way to structure their product and accomplish their goals, and had to make some on-the-fly changes to be ready for the finals,” said Pariso. “They worked incredibly hard and were really engaged with advisors, mentors and the marketplace to find the right structure and come out with a stronger product.”

After taking home $200,000 from the Innovation Fund, Safe Rate was accepted as one of four startups in this summer’s BMO Harris / 1871 Innovation Program. The program is focused on engaging and mentoring early-stage technology startups in Chicago and Wisconsin that have innovative solutions in lending, financial planning, digital tools, and data analytics. Through the program, Safe Rate will be able to get immediate feedback from a large-scale bank, as well as explore a potential future lending partnership.

But in equally exciting news for Hall and Rayej, who are partners both as cofounders and as husband and wife, they will be closing on their first condo at the end of August – and will be doing it with a Safe Rate mortgage.