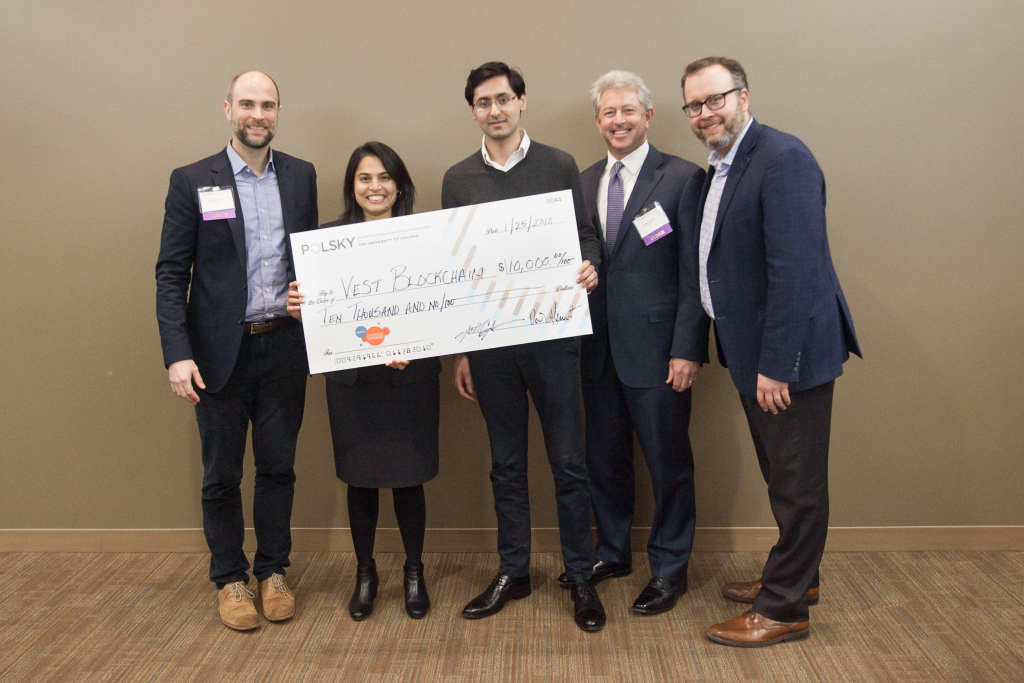 Launched in the fall, the numo Fintech Challenge was the first fintech business plan competition in Chicago for students, being hosted by the Polsky Center at the University of Chicago. The challenge received 18 submissions from 51 students, including those from Chicago Booth, the Physical Sciences division, and the College. Eight teams were then selected for the final pitch round on January 25.

The participating teams represented various areas in the fintech space, from social businesses targeting the under-banked and immigrant populations, to ventures utilizing AI and blockchain in money and retirement plan transfers.

The Polsky Center partnered with PNC in hosting the numo Fintech Challenge, as one of its initiatives to help fintech entrepreneurs gain an early foothold in a rapidly expanding market. “Fintech has exploded on campus this year and amongst alumni as an area of interest. We are really excited to be providing more programming to meet this appetite and be contributing to Chicago’s growing fintech community,” said E.J. Reedy, director of strategic initiatives and fintech at the Polsky Center.

Participants found the numo challenge an enriching experience, and appreciated the amount of support they received from the Polsky ecosystem.

“Before the finals, we were given access to several high quality mentors, all of whom played a big role in our team’s success,” Anuraag Tripathi, cofounder of Manifest, noted.

While Jetson Benefits completed the John Edwardson, ’72 Social New Venture Challenge (SNVC), last year, they still appreciated the opportunity to deepen their industry connections and push their ideas further to market: “The challenge made us think more critically about our next steps to develop our first iteration product,” Mouleena Khan, co-founder of Jetson, said. 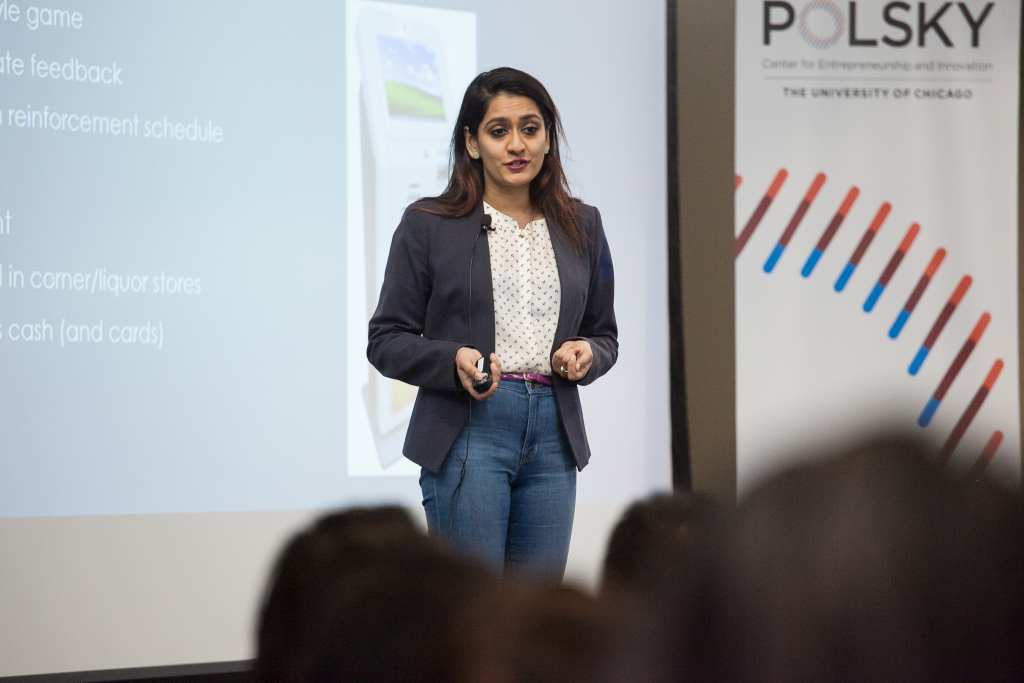 The numo perspective
Last year alone, fintech startups raised more than $12 billion from investors globally. The creation of numo and its fintech challenge across universities nationwide seems to represent a trend of traditional banks embracing the fintech revolution.

Unlike traditional incubators, which mainly allocate funds to companies, numo, a subsidiary of PNC Bank launched in February 2017, sources fintech ideas and helps the idea generators build them out.

Dave Passavant, CEO of numo and head of innovation at PNC, points out that the challenge is a way for numo to establish a larger presence across campuses and research institutions, and to support innovative fintech ideas. The numo Fintech Challenge at University of Chicago was the second challenge on a university campus.

“The number one goal of the fintech challenge is to spread the word about what numo is. We are attracting people who [are drawn to] the sweet spot of financial services, tech and entrepreneurial companies,” Passavant said.

As one of the judges for the final, Jeff Carter, MBA ’07, manager at West Loop Ventures, a VC firm that invests in seed and Series A B2B fintech startups, was impressed by the fresh ideas he saw at the competition.

“What’s encouraging to me is that a place like Booth is doing fintech in Chicago, which is the number one fintech place in the world, contrary to what most people think, such as London, New York, and Hong Kong,” Carter said. “I think people are starting to think outside the box a little bit. We are not talking about whether these companies are successful or not, but [whether] it’s an interesting [and viable] idea.”

Having judged a number of competitions, Rumi Morales, founder of Rumi Ventures, appreciated that numo’s judging metrics focused on the idea being pitched instead of the actual presentation itself.

“Many other judging competitions would talk about the pitch itself, how did somebody present. [However, the numo final] is purely about the business, the idea, its viability, the technology, the novelty, so on and so forth. I thought it’s a really good way to run a judging show.”

Morales was also pleased by the number of women in the teams, especially the gender representation in the winning ones.

“To my best recollection, I have not seen as much diversity in other competitions I have judged,” she remarked.

What’s Next?
All three winning teams plan to invest the prize money in developing their business and building out their product.

First-place winner Manifest, plans to talk with more banks to get their consortium off the ground. Jetson Benefits believes that building a customer base will come naturally once they recruit the right technical team on board. Seedling wants to use the prize money for testing game payouts and is hoping to participate in the upcoming Edward L. Kaplan, ’71 New Venture Challenge (NVC).

numo is a fintech incubator in Pittsburgh, Pennsylvania and a wholly owned subsidiary of The PNC Financial Services Group, Inc.  The name numo comes from the word numismatics- the study or collection of currency. numo collaborates with technical academics and entrepreneurs to incubate banking technology products and companies. Visit us at www.numo.com

About the Polsky Center for Entrepreneurship and Innovation
The Polsky Center for Entrepreneurship and Innovation drives venture creation and technology commercialization within the University of Chicago and the surrounding community. Through education, partnerships, and new venture support, the Polsky Center advances the knowledge and practice of entrepreneurship and accelerates the commercialization of research. Among its offerings is the top-ranked accelerator program, the Edward L. Kaplan, ’71, New Venture Challenge, which is where companies like Grubhub and Braintree got their start. Since 1996, the New Venture Challenge has helped launch more than 160 companies worldwide that have gone on to achieve more than $4 billion in mergers and exits and raised over $575 million in funding. The Polsky Center helps students, faculty, staff, alumni, researchers and local entrepreneurs navigate the complex process of creating and growing a startup. Its resources include a 34,000 square-foot, multi-disciplinary co-working space called the Polsky Exchange; an Innovation Fund that invests in early-stage ventures; and a state-of-the-art Fabrication Lab for prototyping new products. By leveraging the University’s distinctive strengths in research and a combined research budget of more than $1.5 billion from its three affiliates—Argonne National Laboratory, Fermilab and the Marine Biological Laboratory—the Polsky Center paves the way for more ideas to have a meaningful impact on society.

To stay updated on UChicago-related fintech news and upcoming events, subscribe to our monthly fintech newsletter. You can also learn more about fintech, insurtech and regtech programming at the Polsky Center here.