‘This is What the Future Looks Like’: Celebrating Quantum Innovation in Chicago 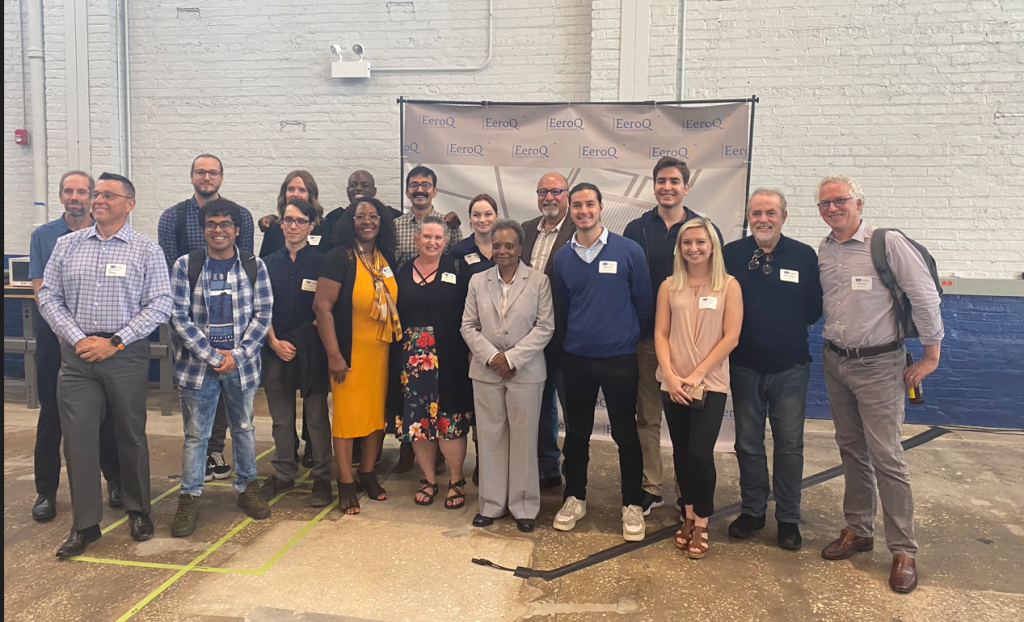 The event doubled as a ribbon-cutting ceremony for quantum hardware company EeroQ’s new lab headquarters at The Terminal in Humboldt Park. EeroQ, a CQE corporate partner since March 2022, is developing cutting-edge quantum computing technology using electrons trapped on superfluid helium. This event marked the company’s official relocation to Chicago where they will continue to work with CQE to drive quantum innovation.

Representatives from companies such as IBM, JPMorgan Chase, Protiviti, IonQ, Quantum Design and Quantum Machines as well as research institutions including the Pritzker School of Molecular Engineering, Northwestern University, Fermilab, and Argonne National Laboratory were present for the ceremony. Also in attendance were Mayor Lori Lightfoot, Emma Mitts, Ari Glass, and Michael Fassnacht.

After the ribbon cutting, Lightfoot expressed optimism about this newest addition to the city’s research ecosystem. “This is exciting for a whole host of reasons, none the least of which is this company will make Chicago’s quantum economy that much stronger,” she said. “As many of you know, quantum technologies have the potential to revolutionize every field of science and engineering, as well as our everyday lives. It can enable advanced computing, unhackable communications—imagine that—and many other applications that have yet to be discovered. This is what the future looks like.”

The city’s ecosystem is also strengthened by startups, which the Duality Accelerator is working to identify and support. The five companies in Duality’s second cohort were present at the ribbon cutting, as well as Cohort 1 members qBraid, Great Lakes Crystal Technologies, QUANTCAD, and Super.tech (recently acquired by ColdQuanta). Through their partnership with Duality, all are now located in or have deep ties to Chicago, and they will contribute to the future of the city’s quantum landscape.

Lightfoot took a moment to welcome these startups in acknowledgment of the key role they play, as well as partners including the Polsky Center for Entrepreneurship and Innovation, the Chicago Quantum Exchange, the University of Chicago, the University of Illinois, Argonne National Laboratory, and P33.

Matthew Anderson, CSO of Cohort 2 startup Wave Photonics, was inspired by the example this event set for supporting quantum research. “As a company focused on solving a deep technical problem with significant applications for quantum technologies, we’re really excited to be part of the Duality accelerator and the wider Chicago quantum ecosystem it is helping to build together with the Chicago Quantum Exchange,” he said.

Also representing Cohort 2 was Manish Singh, CEO of memQ. As head of a quantum hardware company, he was encouraged by the success of another player in the industry. “We see EeroQ lab space inauguration as a milestone in the development of Chicago’s quantum ecosystem,” he said. “I think it makes for a great role model for other startups and an inspiration to the scientists and engineers in training.”

The addition of EeroQ to a rapidly growing innovative force in Chicago is a major step in “the pursuit of this exciting quantum future” shaped by large companies and startups alike, Lightfoot concluded. Looking forward to the future of the city, she confidently claimed, “Chicago is able to become the central hub for cutting-edge quantum research and innovation in America.”