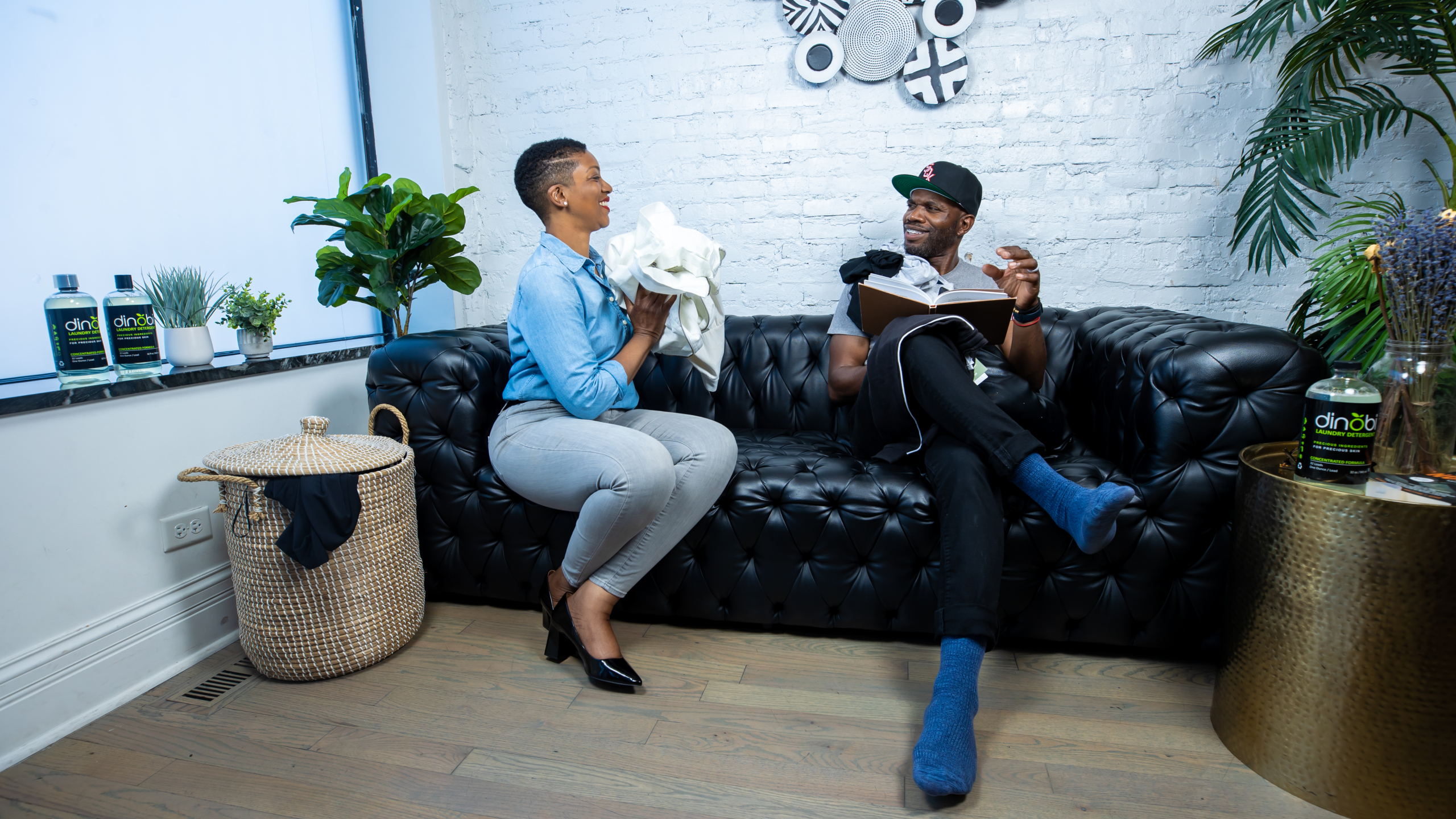 The story of Dinobi Detergent is as much a love story as it is a tale of entrepreneurship and laundry soap.

Founded by Augie and Sylvia Emuwa, a Bronzeville couple married 11 years and raising four children, Dinobi has flourished on the strength of a partnership that flows as seamlessly in business as it does at home.

“The success of Dinobi is a product of us being successful in marriage,” said Augie Emuwa.

Dinobi, an alum of the Polsky Center’s Small Business Growth Program, launched into market in 2019 with a premium plant-based laundry detergent designed with sensitive skin in mind. That same year the fledgling company won South Side Pitch, a competition for local entrepreneurs hosted by the Polsky Center and the Institute for Justice’s Clinic for Entrepreneurship.

Today, Dinobi’s expanding product line is sold by a dozen online and retail stores, many of them with an eco-conscious bent, and the Emuwas have partnered with several South Side schools to promote lessons in health, hygiene, and entrepreneurship.

They have taken a decade to reach this point, traversing through territory far outside of their comfort zones. And it all started with a dirty diaper. 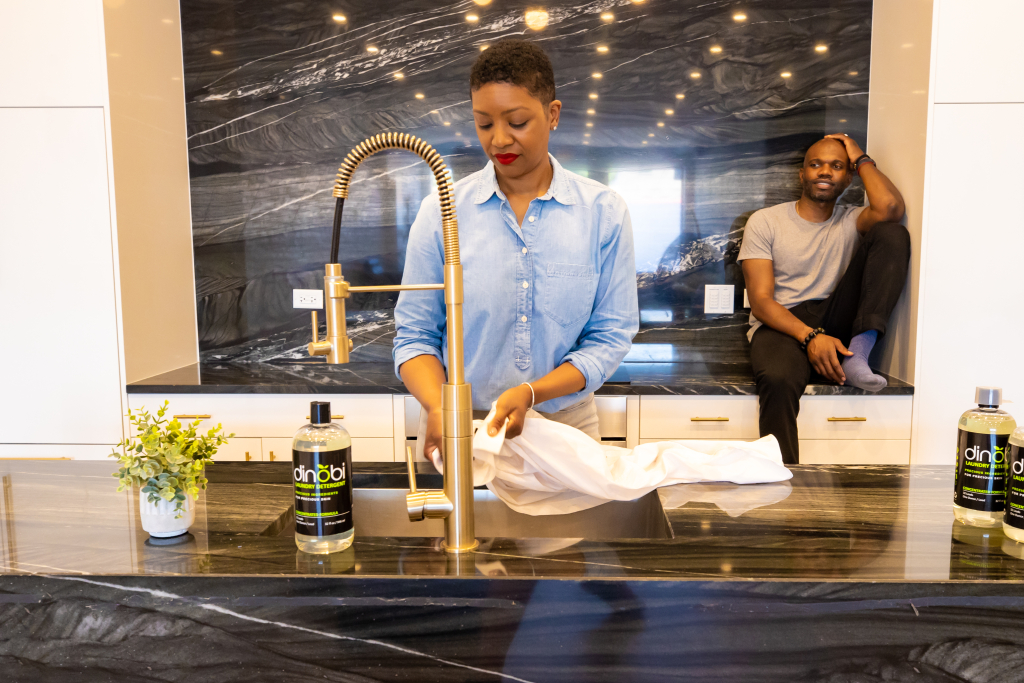 Sylvia Emuwa, changing her newborn 10 years ago, noticed the baby’s legs turning dark and wrinkled in an apparent reaction to the plastic diaper.

She started using cloth diapers instead, but couldn’t find a detergent that was both gentle for baby skin and effective at cleaning and deodorizing the messes.

So Sylvia, an accountant, started poking around on Pinterest to find different homemade solutions. Her husband, a school principal who has severe eczema, served as the human guinea pig to test her concoctions.

Through a friend in the skin care business, Sylvia connected with an organic chemist who worked with her to develop a safe, all-natural formulation that could thoroughly clean the dirtiest load of laundry. It took years of trial and error.

“Once we got the funk out of my compression pants, we knew we were ready,” Augie said. 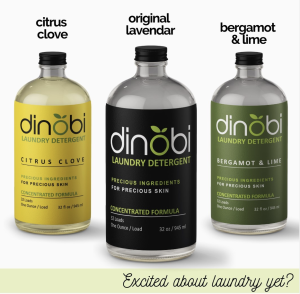 Made with a highly concentrated, sugar-based formula, scented with essential oils and free of dyes and artificial fragrances, Dinobi Detergent debuted to friends and family in a calming lavender scent. Dinobi, which means “precious” in Igbo, a language spoken in Nigeria, has as its tagline: “Precious Ingredients for Precious Skin.”

The product was a hit. But the business model needed an overhaul.

Working out of a 250-square-foot storage unit, the Emuwas were making tiny batches of 20 bottles by hand. Production and ingredients cost more than they felt comfortable charging customers.

“We didn’t really feel completely confident that we could stand with our chest out and say, ‘This is the price,’” Augie said. “You feel intimidated because you see the Tides of the world that say you can wash all these clothes for three dollars.”

Winning South Side Pitch was a gamechanger. With the $5,000 in prize money, Dinobi placed its first bulk order, partnered with a co-packer to do a larger run, and launched a Web site.

The Polsky Center’s resources also were critical. Through its mentorship program, the Emuwas consulted with industry professionals about marketing, scaling, manufacturing costs, and how to best fund the business. 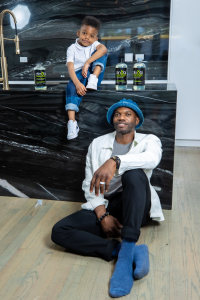 Dinobi’s first major order came from Grove Collaborative, an online retailer for natural, sustainable, ethically produced household and personal care products. The Emuwas, crammed into their storage facility, pumped the soap out of the barrels themselves.

“That helped me solidify in my head that this will work,” Sylvia said.

There were other, more subtle milestones as the accountant and school principal waded into unfamiliar entrepreneurial waters.

Sylvia, who “hates sales,” says the first time she pitched the business to an audience, “I was nervous as all get out. But it was a confidence builder.” Each person they met who believed in the brand gave them the courage to keep going.

Dinobi has since moved into a 1,000-square-foot manufacturing facility on the South Side, where two employees help the Emuwas with production. In addition to Amazon and numerous online specialty retailers, Dinobi products are sold at the Silver Room in Hyde Park, Mighty Nest in Evanston, and Eco and the Flamingo in Lincoln Square, among other local shops. Dinobi has had particular success in zero-waste stores, where it sells its products in glass bottles.

In August, Dinobi will introduce a new product – plant-based moisturizing dish soap – and will reintroduce some of its most popular scents – bergamot and lime, citrus clove — that have been out of stock due to supply chain issues caused by the pandemic. It also plans to launch an unscented detergent. 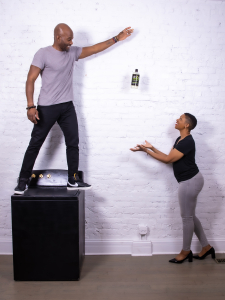 At $18.99 for a 32-ounce bottle, Dinobi detergent is still priced higher than many people are accustomed to paying for laundry soap. The Emuwas say a priority is to educate people on the value of the concentrated formula — each bottle can handle 32 loads – and the multi-purpose nature of the product, which works as well on removing pet stains from carpet as it does on soiled cloth diapers.

For Augie, it’s particularly important to spread the message in Chicago communities where it isn’t common to shop at zero-waste stores. Growing up in the city as “an under-resourced youth,” often in temporary living situations, Augie recalls washing his clothes alone in a laundromat as a nine year old, swinging his feet as he sat in an orange chair, and feeling at once overwhelmed by the bigness of everything yet proud of the independence to take care of himself.

With those kids in mind, the Emuwas kicked off a program at Dulles School of Excellence and Joplin Elementary, two elementary schools on Chicago’s South Side, to talk about entrepreneurship and help students think more carefully about health, hygiene, and the environment. They also provided detergent to the schools at a highly discounted price for students who don’t have easy access to personal care products.

“We want to be a positive disruption in the marketplace and get people to be more critically evaluate the products they use,” said Augie, who is in talks to bring the program to more schools. 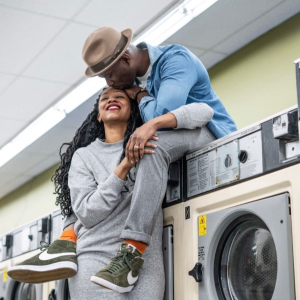 Through the ups and downs of building the business, Augie and Sylvia Emuwa have leaned on each other. They say being business partners has strengthened their marriage, highlighting how well they communicate and focusing them on a common goal that allows minor grievances to fall by the wayside.

The couple, who met in college at Jackson State University in Mississippi, didn’t strike up a romance until eight years later, when they reconnected on Facebook. Augie had always had a crush on Sylvia. Sylvia, upon hearing Augie’s voice for the first time after all those years, knew immediately that she would marry him.

Neither ever imagined they would leave their professions to run a laundry detergent business together. It took a leap of faith, and unfailing trust in each other.