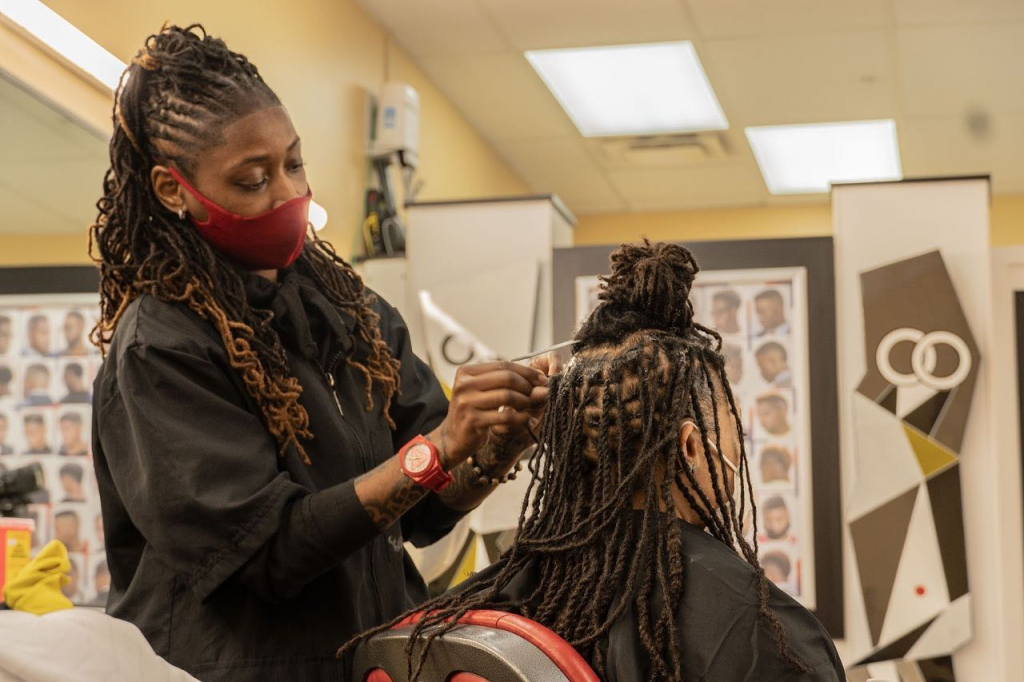 Angela Harvey had never cut hair before she enrolled in Larry’s Barber College. Her first time wielding clippers, after months of classroom instruction, “I was shaking like a leaf,” she said.

“Now I’m not scared of anything,” Harvey, 54, said as she sat in a red barber chair waiting for customers inside a gleaming South Side Walmart, where Larry’s Barber College recently opened the first of what it hopes is a chain of barber shops owned by the school.

Larry’s Barber College, a two-time alum of the Polsky Center’s Small Business Growth Program, has reached an exciting juncture in its evolution. Founded in 2004 to offer professional barber training as an alternative to street life, it now has six training locations, including three inside of the penal system, and is embarking on a plan to open a chain of shops where its graduates can build their client rosters and launch their hair-cutting careers.

The first shop, called Larry’s Barber Maximus, opened in September 2021 in the Walmart Supercenter in Chicago’s Chatham neighborhood, with eight barber chairs plus stations for cosmetologists and nail technicians. The second shop, in a Walmart in the Pullman neighborhood, is slated to open this month. There are plans for three more Walmart locations.

If all goes well, Adam Farmer, chief operating officer at Larry’s Barber College, hopes the partnership with Walmart opens the door to a nationwide expansion of Larry’s shops that its barber school graduates could take over and run themselves.

“I really want for our graduates to become the small employers in the community,” Farmer said. “To not just be a barber, but to own a shop that can help them employ other barbers.”

Walmart reached out to Larry’s with the shop opportunity after civil unrest sparked by the murder of George Floyd caused extensive damage to many of its Chicago stores. When the retail giant announced it would recommit to impacted neighborhoods, investing $50 million to reopen and improve the stores, it also introduced new services to meet community needs.

The Chatham store, which closed for six months for repairs, reopened with a health center offering dental, vision, and behavioral health services, and an adjacent Walmart Academy offering vocational and college prep courses. The in-store barber shop adds to the one-stop convenience for shoppers. 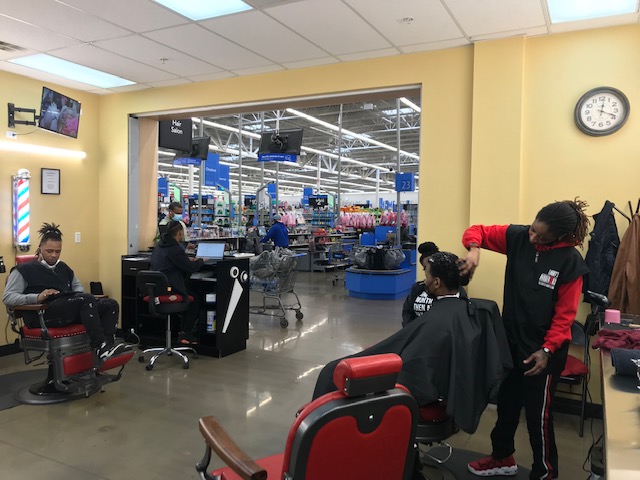 Farmer said many Barber Maximus customers are single moms of young boys who may not feel comfortable taking them to a corner barber shop where they are unsure of the safety, language, and music. Walmart’s well-lit environment, with security guards and a family-friendly atmosphere, offers an alternative.

For the newly licensed barbers, being stationed inside Walmart, which sees 5,000 customers daily and has hundreds of employees, provides a built-in customer base.

Harvey, a self-described “people person,” says she sometimes approaches shoppers in the store and recruits them to get a haircut.

“I tell mothers, ‘I can cut your child’s hair while you shop,’” she said. 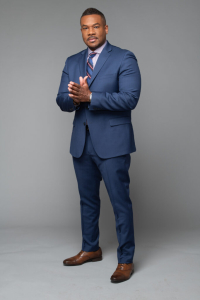 Larry’s Barber College was founded by Larry Roberts, Jr., who started cutting hair in his parents’ basement when he was 13 and opened his first shop at 19 in his hometown of Matteson, IL. He launched the college to promote barber training as a path to a steady income for people who might otherwise turn to violence or illegal activities.

About 120 students are currently enrolled in the three Larry’s Barber College schools – two on Chicago’s South Side and one in Joliet — and more participate through its barber training programs inside the Cook County Jail and two juvenile detention facilities in Chicago and Warrenville.

The 14-month curriculum gives students the 1,500 hours of training required by the state before they can take the barber exam to get licensed. The vast majority of students receive federal financial aid to help cover the $17,290 tuition. Programs inside the penal system are free to students, who receive scholarships through the Data Foundation, a nonprofit Larry’s founded to underwrite the tuition of inmates.

Outcomes vary by school location. On average, about half of students in the non-jail schools complete the program, and 80% of those get placed in a job and/or licensed, according to outcome data posted to the Larry’s website.

Completion inside the jail system is harder to track given that the population is transient, but participating in the program has other benefits. Student barbers can watch TV, listen to the radio, and “when they get good they get paid to cut hair by other inmates in currency likes soap and other necessities,” Farmer said. 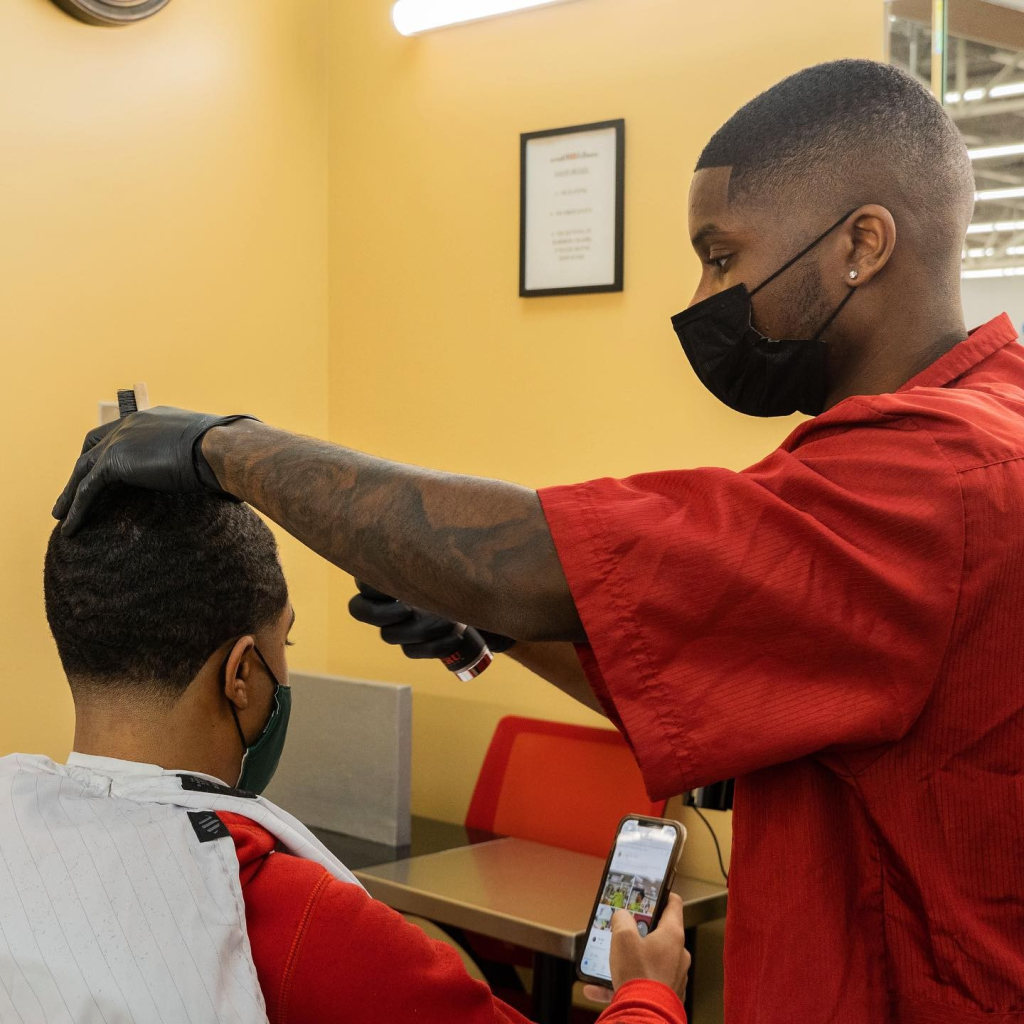 John Randolph, a student instructor at Larry’s Barber College, cuts hair at the shop in Walmart.

Christopher Hill wasn’t in jail when he started barber school, but he was on the streets “making money the wrong ways,” he said. Hill’s father had always told him he was better than that. The week his father died, Hill enrolled in Larry’s Barber College.

It was a natural fit. Hill was already his family’s unofficial barber, and at Larry’s he learned the ins and outs of shaping afros, designs, and bald fades. He enjoyed the school environment, which felt “like a family.”

“You gained a diploma and your certification and you also gained a family,” said Hill, 34.

Now working at Barber Maximus inside Walmart, Hill said he is learning to manage money and has been able to take care of bills. He aspires to open his own barber shop to leave to his kids, aged 14 and 11.

He enjoys the positive energy from his clients, to whom he provides an ear as well as a trim.

“It’s more to being a barber than cutting hair,” Hill said.

There is also more to Larry’s than barber instruction. The schools teach life skills such as paying taxes, getting insurance, and writing business plans. It currently is running a pilot program to provide housing for students who don’t have stable living arrangements.

Unlike many barber shops that are cash-based, barbers at the new Larry’s shop are paid their commissions with a weekly paycheck so that they can have proof of income for building credit and discipline around paying taxes. Farmer estimates they earn $800 to $1,200 per 40- to 50-hour week. 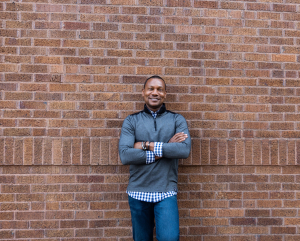 Farmer, who joined the company two years ago, said his mission at Larry’s is to promote students’ spiritual, physical, and financial well-being. A serial entrepreneur with a background in sales and a master’s degree in divinity, Farmer said the hardest part is that many students don’t believe in themselves.

“We are helping people to raise their expectations,” he said. “This is ministry.”

Farmer is also working to raise the profile of the business. This spring Larry’s inked its first sponsorship agreement with the world champion Chicago Sky WNBA team, whose Beyond Basketball initiative supporting minority-owned small businesses aligns with the Larry’s mission, he said.

He also is eyeing expansion. And that’s where the Polsky Center’s Small Business Growth Program (SBGP) came in.

To grow, the business needs more instructors, but it is hard to find enough that fit the Larry’s culture, Farmer said. Through SBGP in fall of 2021, Farmer was paired with a team of University of Chicago students who helped him create a plan to grow instructors internally by training Larry’s graduates to teach. He repeated the program that winter, when another UChicago student team created a road map for putting the plan in place.

“My team has been consistently learning through that process,” Farmer said. “Now we can execute on that plan.”

Opening Larry’s-owned shops is a key part of the puzzle. The barber college, which usually refers graduates to Supercuts, Great Clips, and other chains, can now offer them a chance to build their clientele with Larry’s and potentially become partners in the enterprise. 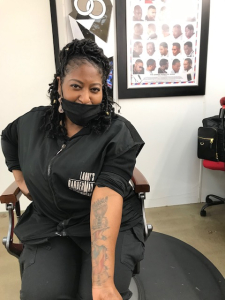 For Harvey, cutting hair is laying the path to a different dream: to be an investor in rental properties. Though she was at first frustrated that she had to wait for a paycheck rather than pocket cash the same day, she now realizes the importance of building her credit so that she can buy real estate.

She also loves cutting hair more than she could have imagined when she started with zero experience. “I like how you can transform someone’s look,” she said. “They can look homeless and then they look like a superstar.”

Harvey pulled up her sleeve to reveal a tattoo of a striped barber pole the length of her forearm.