A More Efficient and Sustainable Battery for a More ‘Electrified’ Society

An assistant professor in the department of chemistry at the University of Chicago, John Anderson, BS/MS ’08, has patented a material that can store and produce energy more efficiently and sustainably than current methods.

The patented iron sulfide-based material is fabricated in either a bulk powder or as a thin film deposited on a substrate material.

The researchers were interested in discovering new materials that offer either enhanced performance or lower costs for energy storage schemes, said Anderson. This includes electrodes used in supercapacitor devices, such as electric vehicles, among others. The electrodes could also be used in lithium and sodium batteries for electronic devices and have applications in grid energy storage.

“What’s exciting about our discovery is that we can take a material that has been investigated, iron sulfide, and structure it into nanosheets. These nanosheets should enable faster and more reversible charging in battery applications,” Anderson explained. 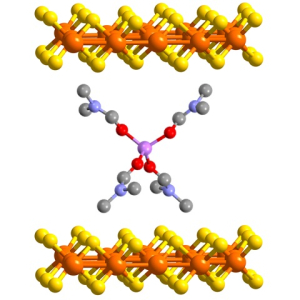 A proof-of-concept has been demonstrated through laboratory synthesis. The immediate applications are using this as a cathode, potentially in sulfur batteries. If optimized, the materials could be solid-state electrolytes or cathodes for a variety of batteries.

As for the next steps, the biggest hurdle right now is increasing the stability of the materials – which will be important for any applications, he said.

“As society becomes increasingly electrified, there will be more and more demand for batteries, and hence the raw materials that constitute them,” added Anderson. “What’s exciting about this research is that our material is composed of two of the cheapest and most abundant elements on the planet: iron and sulfur.”

According to BloombergNEF’s New Energy Outlook 2020, a long-term scenario analysis on the future of the energy economy, worldwide power capacity almost triples between 2019 and 2050.

Lithium-iron phosphate will remain in high demand because of its use in commercial electric vehicles, electric buses, and stationary storage, the report noted, adding that this will require “a dramatic increase in battery manufacturing capacity and supply of raw materials.”

Additionally, per the report:

“The future of energy storage is going to rely on new battery technologies. Despite this, the fundamental materials we are using for batteries are decades old,” Anderson noted. “While these materials have been highly optimized for excellent performance at this point, there is still a fundamental limit to battery performance that is imposed by their composition.”