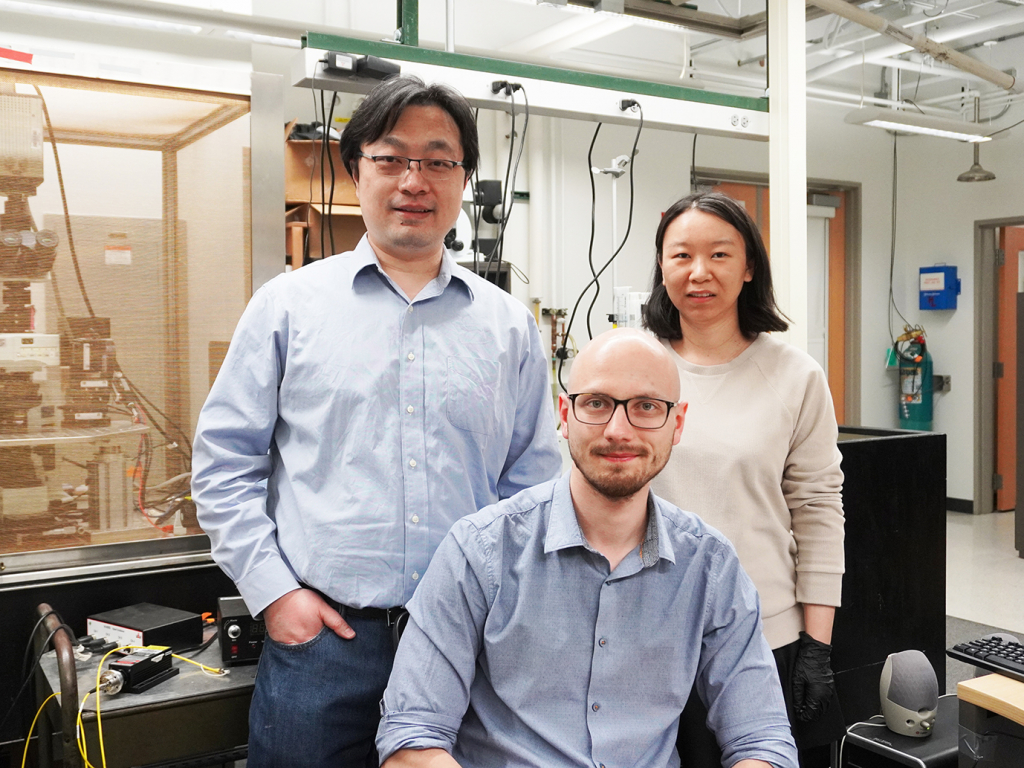 Researchers at the University of Chicago have patented a new approach for developing carbon-based bioelectronic devices, which have a variety of applications in drug delivery, substance detection, and organ modulation.

Among the first bioelectronic devices that have seen widespread clinical application are pacemakers and cochlear implants. However, these devices have historically been bulky, rigid, and mechanically invasive to cells and tissues. A need exists for smaller, more flexible devices in order to improve the performance of these and future devices.

Bozhi Tian, an associate professor in the department of chemistry and the University of Chicago, has been exploring this issue from various standpoints and in his lab works on imitating cellular behavior using semiconductor nanomaterials and augmenting existing biological systems with semiconductor components. The lab also is always working toward developing new biophysical tools to understand subcellular dynamics – particularity, the ability to control living cells in real-time.

“In the past, our lab mostly focused on semiconductors like silicon and silicon carbide, which have a lot of interesting electronic properties,” explained Bozhi Tian, who has several patents related to semiconductors. However, silicon has some drawbacks, such as issues with stability, so the team decided to focus on a different material: carbon.

The project, which lasted three years, took a significant amount of effort on everyone’s part, said Lingyuan Meng, a PhD student in Tian’s lab. “We all worked together on most experiments and I have been involved from the beginning to the end, including the bottom-up fabrication of the carbon-based bioelectronics devices, biological experiments, and the data analysis,” she said.

Today, the work has culminated in a new patent for a novel approach to creating carbon-based bioelectronic devices. The method is highly scalable, as Tian said the devices can be fabricated quickly, efficiently, at a low cost, and can be used for extended periods of time without degradation concerns.

Additionally, the approach results in a monolithic material – meaning it doesn’t require a polymer binder that often leads to bulkier devices. This type of material also is less likely to be toxic to cells, compared to other currently studied forms of carbon, said Aleksander Prominski, a PhD student in Tian’s lab, who said the study on carbon-based bioelectronics tried to answer the question of how they could design biocompatible materials that are also stable and electrically efficient.

Using the patented approach, the researchers can fabricate devices that, in addition to being monolithic, are flexible, conducting, and most importantly, biocompatible. “We have shown that hierarchical carbon membranes form high-quality interfaces with biological structures and enabled modulations of cells, tissues, and nerves,” explained Prominski.

With potential applications in biophysics and tissue engineering, the patented material and device have successfully been applied to stimulate cells in vitro, or in a culture dish. The next steps would involve testing the device in animal models.

“In our body, the way that cells and tissues communicate is to use ions, so we decided to manipulate these ions using this electrochemical device. The basic idea is to use the material to attract and repel ions,” explained Tian. “Our tissues are very complicated; they do not just communicate chemically, but electrically.”

This complexity, however, is what enables researchers to treat disease both chemically with pharmaceuticals, and electrically, with devices like the ones being developed in Tian’s lab. Applying this two-pronged, electrochemical method, “you don’t miss one possible approach to healing or damage repair,” Tian said.

The researchers have demonstrated various potential applications for the devices, which can also incorporate flexible electrical sensing or recording functions. Among its potential uses include modulating the contraction rate of cardiac cells to target frequency, controlling the electrical properties of isolated heart and retinal tissues, and stimulating sciatic nerves.

“Efficient stimulation of hearts and nerves shows potential for application of this material in bioelectronics implants,” added Prominski. Meng also noted that the platform could potentially also be used in energy research or as an implantable power element.

“Bioelectronics is highly interdisciplinary field and it benefits techniques across the physical and life sciences through facilitating novel insights into the fundamental scientific understanding and facilitating a variety of biomedical applications,” said Meng, who is focusing her research on using synthetic materials for cellular and intracellular biomodulations.

Currently, she is working on two independent projects, including the development of active biomaterials for activating and modulating T-cells and chimeric antigen receptor (CAR) T-cells signaling and functions. This work could have significant implications for cancer prevention and treatment.

Prominski also is pursuing his research in two main directions. “My first project focuses on materials chemistry, and I am studying how surface nanoengineering can be applied to design efficient optostimulation materials,” he said. These materials could be used for heart pacing and neural stimulation and have many promising clinical applications, such as injectable temporary pacemakers and deep-brain stimulation probes.

His second project is related to cell physiology – with the goal of developing advanced real-time image processing and automating bioelectronic experiments. “Currently, I am designing an intelligent and automated computer system that can perform autonomous bioelectronic experiments on timescales that are not practical for the human experimenter,” he explained. The system incorporates state-of-the-art machine vision and machine intelligence algorithms.

“I believe that my studies will allow us to perform new types of bioelectronic experiments, which will expand our understanding of biological systems and support new developments in cell and tissue engineering,” Prominski explained.

Moving forward, Prominski is expanding on his research with Tian and Meng to try and build a better model of how nanostructured electronics interface with cells and tissues and which signaling pathways are being activated. The goal is to enable new methods of tissue engineering.

“Overcoming cost and risk coming from the implantation of invasive devices will enable widespread application of electronic implants in patients for better monitoring and therapeutic interventions in future personalized medicine,” said Prominski.