Beltech – which stands for “beyond lithium technology” – was co-founded by Lin Chen, a current student at the University of Chicago Booth School of Business, and alum Robert Conrardy, MBA ’92, who also is a managing partner at Betterview Ventures, a private investment partnership focused on companies that will have a sustainable impact on society.

The technology, for which the company has several patents pending, will allow electric vehicles to drive further and drones to have a longer range, among other applications, said Conrardy, who is the general manager of Beltech. It enables battery manufacturers to use their existing manufacturing process to improve batteries and also addresses safety concerns, including overheating and thermal runaway.

Chen, who serves as the company’s CEO and chief technology officer, was recognized as one of Forbes’ 2019 “30 under 30” for his work in the space. 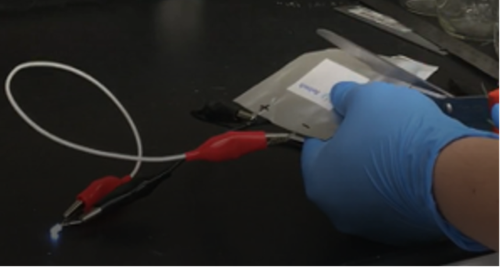 Beltech, testing the safety aspects of a pouch cell made with their protected ultra-thin anode material. (Image credit: Beltech)

According to Conrardy, participating in the NVC gave them the opportunity to work with students, some of whom are still actively involved with the company, including UChicago undergraduate Ren Yu Kong. “It was great because not only did we get to meet other teams, but we also got a chance to meet with a lot of mentors and the professors and advisors that ran the programs who were very helpful in supporting us going forward,” said Conrardy.

“I was amazed at what the University of Chicago and the Polsky Center has done to really support the startups in Chicago, but also on a global basis. We have great instructors as well as advisors and mentors,” he added. “The programs and various investment vehicles that are backed by alumni from the University have only increased the success of a lot of these startups, including Beltech.”

Most recently, Beltech was awarded more than $100,000 in total prizes at the Rice Business Plan Competition. Chen and Yu Kong represented the company at the event in which they placed fifth. Beltech also was one of the winners of LG Chem’s “Battery Challenge Pitch Day” and spent time at the company’s research facilities in South Korea.

With new funds secured, the company is moving forward with plans to license the technology to battery manufacturers and end-users, such as electric vehicle companies that are starting to make their own batteries. They are discussions with various strategic partners and investors, said Conrardy.

“It will definitely be a win-win to the clean energy area, because a lot of electric vehicles and potential electric aircraft are looking at technology like this as a way to improve those products and devices that are in the market, including wearables,” Conrardy noted.

The company also aims to move the technology into energy storage applications – like the power grid – in order to help ‘smooth the curve’ in terms of electrical use. “That will move us away from fossil fuels and reduce greenhouse gas emissions,” added Conrardy. “We’re trying to make a material impact on battery and clean-energy technology.”