Why Surviving COVID-19 for NVC Alum BrewBike Includes Giving Back 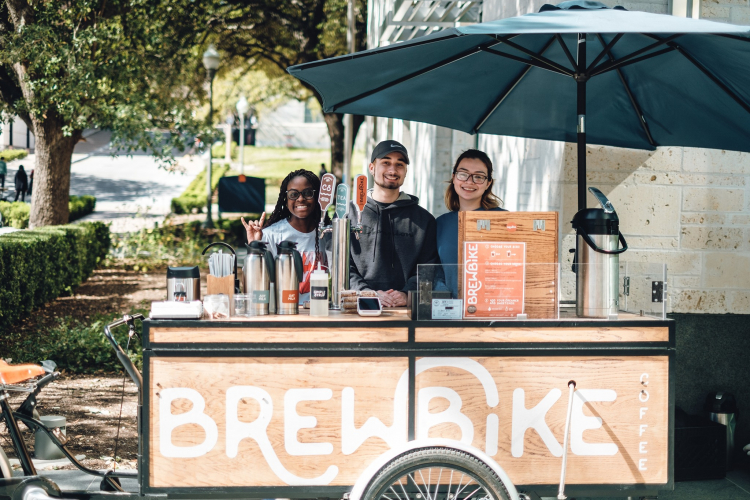 NVC alum, BrewBike, began on the Northwestern campus in 2015, when co-founder, Lucas Philips wanted to buy high-quality coffee without standing in a long line. The solution was BrewBike, a mobile coffee shop. Using a cargo bike that doubles as a coffee stand, this model allows several locations on one campus.

Now in its sixth year, the company employs and empowers over 100 students on four different college campuses across the country. Beyond just serving good coffee, BrewBike teaches its college students business skills by having them run and manage their own branch of the company.

In mid-March, with the closure of campuses and students returning home, it became clear BrewBike would have to make a change. In a span of 24 hours, Randy Paris, CEO, decided to take the brand online. The challenge, then, was to quickly come up with a minimum viable product and launch a user-friendly platform where it could be sold. On campuses, BrewBike’s known for its cold brews. To bring them online, the team created cold brew kits that have customers make the drinks overnight in their own kitchen. So, in what Paris refers to as a “Herculean effort,” the product and the website went live on April 1, just two weeks after his initial decision to go online.

Nothing happens at BrewBike without the input of the students, including the move online. “Our whole mission as a company is to empower young people,” Paris says. “We don’t do anything where we are straying away from that mission.” Students have remained highly involved in the new online structure. Each one has an affiliate code, which, when used, earns them a commission based on the sales they’ve generated.

The day the website went up, the students took to their social media accounts to get the word out, posting their affiliate codes. David Silverman, creative director, says that was the highest sales day since the transition, which he credits to the students. Their active role online has continued to drive sales and increase BrewBike social media followers.

With a product to sell, BrewBike’s had to rethink its online presence and has rebranded its Instagram, Twitter, and Facebook accounts. Silverman’s still renegotiating the company’s voice; he now has to balance BrewBike’s valued sense of community with a more formal tone.

To help find the right tone, a University of Miami team member will take over the accounts for a while. Silverman is not afraid to utilize student involvement and get creative. For instance, he’s created personalized Zoom backgrounds for each employee to use in class with their affiliate code. Although BrewBike’s true home is on college campuses, Silverman’s found innovative ways to adapt to the virtual campus.

When he made the decision in mid-March, Paris didn’t know if it would go well. A company so rooted in physical interactions and the interpersonal could have trouble transitioning online. However, this hasn’t been the case for BrewBike. In May of 2020, the company sold over 10,000 cups of coffee, which was higher than May of 2019’s sales. Paris predicts that June of 2020 will be the highest-grossing month in company history. He attributes much of this success to the students. “If we put empowering students first,” he says, “everything else is going to fall into place.”

It was important to him that BrewBike do some good: “There are people on the frontlines, and if there’s a single thing we can do to make their lives a little bit easier … we’re going to do it.” This came in the form of Fuel The Heroes. The initiative began with Silverman, who received emails from customers fighting COVID-19. He sent them free coffee, until realizing this effort could become institutionalized. Thus, Fuel The Heroes was born. Each Wednesday in May, BrewBike donated coffee to a group fighting COVID-19 and featured them on Instagram. “It felt really right that these people were coming to us,” Silverman says, “that they were already part of our family.” Fuel The Heroes has contributed to groups such as Hospice of Michigan and the Johns Hopkins Pediatric Intensive Care Unit.

Though the initiative will continue privately, sending coffee to those who need it, BrewBike’s refocusing its efforts, for now, to stand with the Black Lives Matter movement. “It’s really important for BrewBike to be behind this movement because, number one, it’s obviously the right thing to do, and, number two, it’s truly being led and powered by young people and the students, and our mission is to empower young people,” Silverman says. In June, not only is BrewBike matching its students’ donations, but it’s giving $10,000 to organizations chosen by its students that fight racial inequality in America.

Though BrewBike’s taken the internet by storm, the company may be able to go back to college campuses. With some universities opening up in the fall, campus teams are already preparing to reopen their branches. While returning to its roots, BrewBike will continue its online presence.