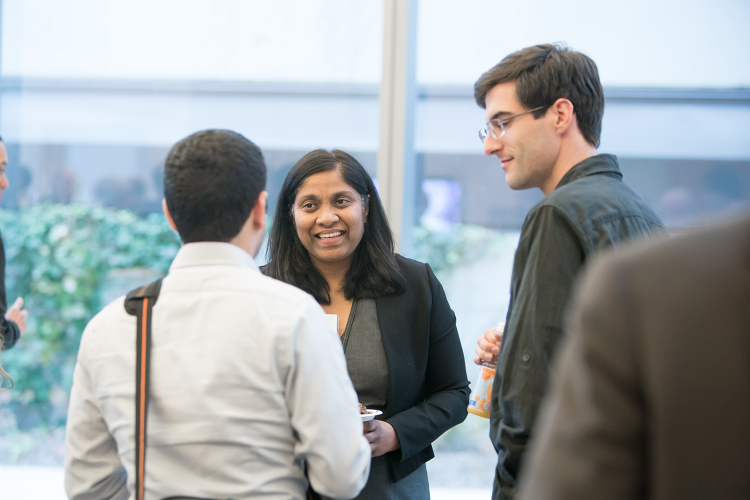 The Polsky Center for Entrepreneurship and Innovation and the Chicago Quantum Exchange (CQE) have announced a joint effort to enhance industry engagement and entrepreneurship in quantum information science, catalyzing efforts to further develop a rich quantum economic ecosystem in Illinois.

Preeti Chalsani, a current member of the technology commercialization team, will transition into the new role of Director of Industry Partnerships for quantum information science. In this position she will lead and manage all activities necessary to cultivate and ensure the success of quantum industry partnerships, engaging the Polsky Center’s broad resources and network, and the CQE’s leading quantum scientific and engineering talent, corporate partners, and growing workforce pipeline.

“Quantum science and engineering brings together researchers from many different areas. I am thrilled to have this opportunity to facilitate connections and interactions within this research community in order to create and expand research collaborations and training opportunities,” said Chalsani. “I look forward to continuing to work closely with colleagues at the Polsky Center to spur the creation and growth of new quantum information science ventures.”

“During her time at the Polsky Center, Preeti has played a leadership role in advancing the University’s support of quantum research and the physical sciences,” said Payne. “We are extremely grateful for all of Preeti’s contributions in this area and we look forward to the continued impact she, CQE, and the Polsky Center will make in strengthening Illinois’ position as a powerhouse for quantum information science.”

In collaboration with organizations such as P33, the Polsky Center, and initiatives such as Argonne’s Chain Reaction Innovations, CQE works to attract and retain top talent, support entrepreneurship, and build the quantum economic ecosystem in Chicago.

“Increasing our focus on engagement with industry is an important way in which we can speed development of quantum technologies and applications, ensuring that Illinois and Chicago are leading the charge in the next tech revolution,” said David Awschalom, the Liew Family Professor of Molecular Engineering at the University of Chicago, senior scientist at Argonne National Laboratory, and director of the Chicago Quantum Exchange. “Preeti’s rich background, which spans applied physics and spintronics, and experience in research, education, intellectual property and technology commercialization provides the expertise necessary to build partnerships between CQE and industry. She is well-positioned to cultivate relationships between companies and leading researchers across the CQE member institutions.”

The CQE began as a partnership between the University of Chicago, Argonne National Laboratory, Fermilab, and the University of Illinois at Urbana-Champaign, and expanded to include the University of Wisconsin–Madison and Northwestern University. The organization also last year welcomed seven industry partners, as well as its first two international partners, QuTech and the Centre of Excellence for Quantum Computation and Communication Technology at UNSW, in addition to two non-profit partners, the Quantum Economic Development Corporation (QED-C) and P33.

“Chicago and the upper Midwest are home to some of the nation’s leading quantum information science institutions,” added Timmerman. The CQE builds connections and collaborations between these organizations to advance the science and engineering of quantum information and train the quantum workforce.

Said Timmerman, “By leveraging efforts and connecting these institutions and researchers with leading companies and economic development groups, we can rapidly translate research into applications useful to our region’s industries, such as communications, finance, transportation and logistics, and biotech, and pharma.”