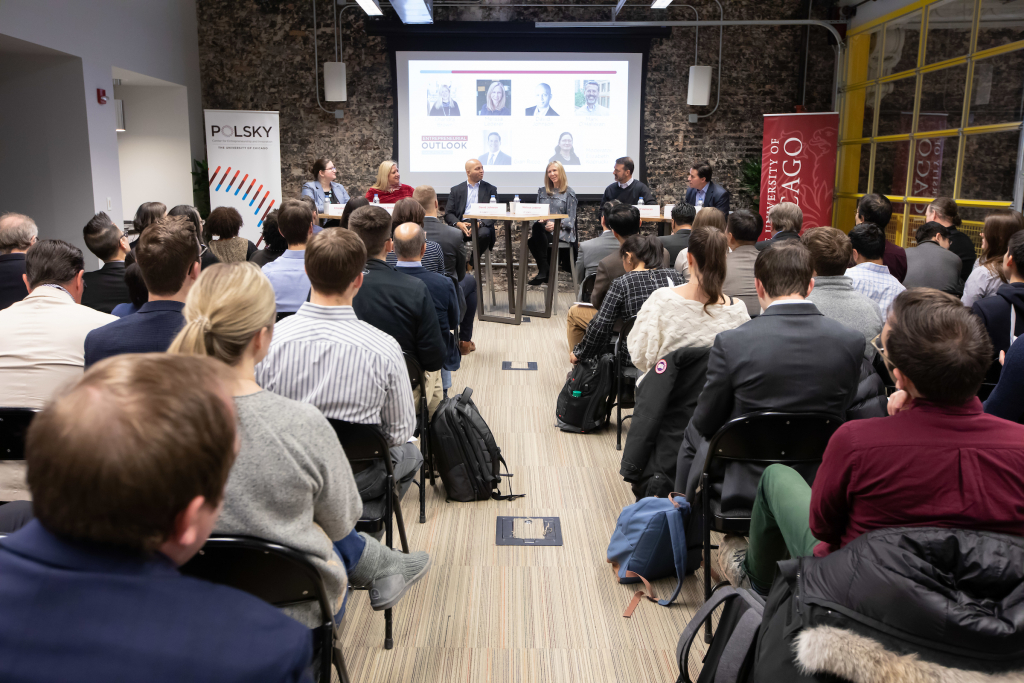 The Polsky Center recently held the second of six Entrepreneurial Outlook sessions focused on the state of the manufacturing industry in 2020. The panel discussion brought together experts to discuss the opportunities and challenges facing manufacturers – which contributed $2.37 trillion to the US economy in the second quarter of 2019, according to the Bureau of Economic Analysis.

“This is the digital ‘Industry 4.0’ revolution,” said Chandra Brown, CEO of MxD, which operates a nearly 100,000-square-foot innovation center near downtown Chicago and helps set up US factories with digital tools and expertise.

Industry 4.0 – the so-called Fourth Industrial Revolution – is being driven by significant advances in technology and is marked by the digitization of industries, such as manufacturing, which Brown said is going to be affected more than others “because we’re going to be changing and having to adapt so much more quickly.”

“I do think that because of this advanced digital and technology the US is regaining its lead [in manufacturing] … and that is a lead for reshoring back here [in the US],” she said. “It’s not just about the labor prices that drive things anymore.” Instead, mass customization needs and the ability to manufacture on-site are among the factors driving work back stateside.

“The ability for the US to compete in making goods is better than ever and getting stronger all the time,” said Gian Ricco, managing director of investment banking at Stout Risius Ross Advisors, during the panel discussion. “I am incredibly bullish on manufacturing in the US.”

However, with growing demand comes the need for skilled workers. According to a report published by Deloitte and The Manufacturing Institute, the next decade will bring an estimated 4.6 million manufacturing jobs, though nearly half of these could go unfilled because of a lack of talent. This skills gap could cost the economy as much as $454 billion in 2028, per the report, and is fueled in part by the industry’s “PR” issue.

Mark O’Halloran, MBA ’93, the director of economic development at Together Chicago, also noted that immigration has been “a significant help” to filling manufacturing jobs.

Yet, because the industry is changing so quickly, Brown said there also has been a lot more interest in the field, though she admits there is still much work to be done. “It all starts really from your exposure to manufacturing,” Brown explained, citing recent moves to bring shop classes back to high school and other initiatives, such as Manufacturing Day.

For Brown, her biggest worry is cybersecurity and a lack of understanding around the potential threats, which increase as the industry goes digital. “Step one, don’t do anything unless you protect your existing assets,” she said.

Offering further advice to entrepreneurs, Brown emphasized the benefits of “convening” and turning to local resources for support. “Every mistake has pretty much been made,” she said. “I want to get to the best answer quickly and I want to do it with the least amount of work.”

O’Halloran also suggested that entrepreneurs connect with larger organizations that understand the pathway to profitability, have capital, and “are dying for innovation.”

Melissa Lederer, the chief experience officer at mHUB Chicago, stressed asking questions early: Who is your customer? What is the market? What is the demand? What are the features and functions they truly want and need?

Polsky Center Assistant Director of Fab Lab and Design, Elizabeth Koprucki, said the conversation reflected the vibrancy of the manufacturing ecosystem in Chicago. “From early-stage prototyping to producing at scale, there are plenty of resources to plug in to, including the Polsky Center,” she said.

Entrepreneurial Outlook: Manufacturing 2020 was the second of six events made possible with support from Loeb & Loeb and Capital One. Other topic areas include medtech, entertainment, quantum, fintech, as well as retail and food.