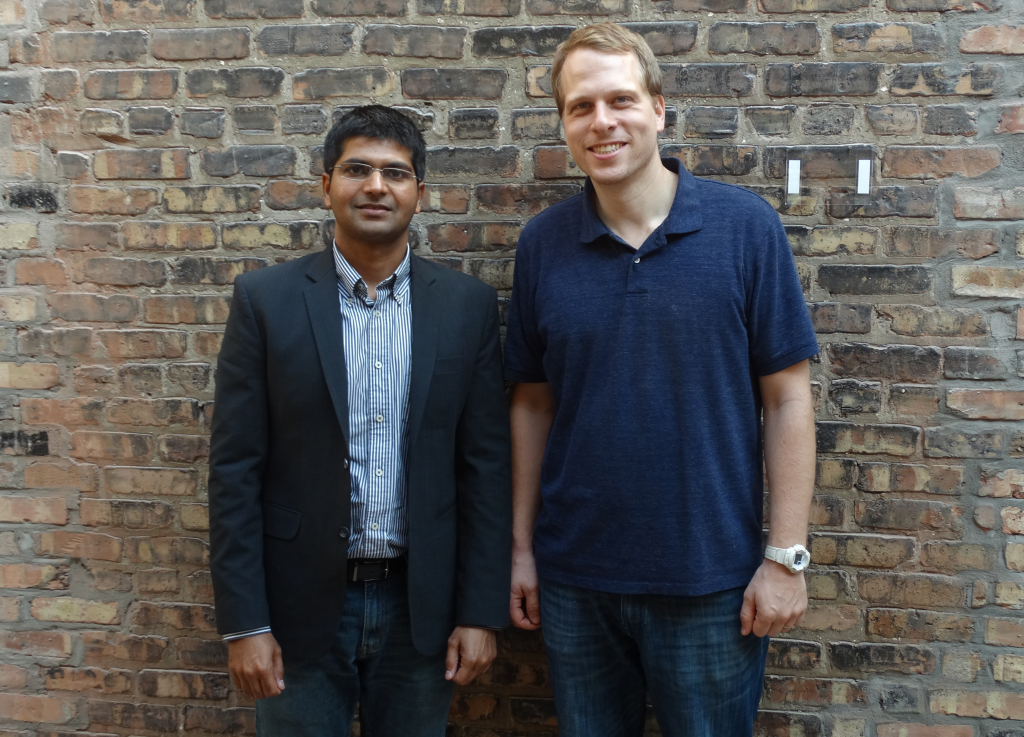 Tharzen, a company that offers a universal content management system that equips businesses with ease-of-use interfaces to visually edit their existing websites themselves will participate at the George Shultz Innovation Fund Finals on December 5.

Sometimes, all it takes is a list of names on a spreadsheet and a cold email to get a company off the ground.

That’s what happened when Mikael Mayer attended an I-Corps event hosted by the University of Chicago’s Polsky Center for Entrepreneurship and Innovation in 2019. He was given a spreadsheet with a list of attendees and contact information, along with their areas of interest, and he sent out a few emails about the work he was doing on a program that would make it much easier for business to edit and update their websites. Aseem Bhardwaj was the first to respond.

The two quickly hit it off – and soon began to develop the idea for a startup that would help companies save time, money, and resources on maintaining their websites. And, with that, Tharzen was born, with Bhardwaj as CEO and Mayer as CTO.

Bhardwaj, who was awarded the prestigious Computer Science, Engineering and Mathematics (CSEM) scholarship, has a technical degree from Purdue University and will complete his MBA at the University of Chicago Booth School of Business in April of 2020. He spent more than a decade working as a senior software architect at IBM and a senior principal architect and evangelist for Microsoft, Amazon, Adobe private equity-backed premium partner firm before starting his first tech venture in 2017. Mayer, a former Google engineer and Microsoft researcher, is a post doc in the University of Chicago’s Department of Computer Science, where he has works with assistant professor Ravi Chughon the underlying technology that has been incorporated into Tharzen’s offering.

The company offers a universal content management system that equips businesses with ease-of-use interfaces to visually edit their existing websites themselves. Its patent-pending AI engine works seamlessly with hand-coded websites, existing frameworks, and all web programming languages such as HTML, PHP, and JavaScript, making editing easier and faster for both end-users and experienced programmers.

The technology enables companies without experienced website managers on staff to move from platforms like Adobe and Webflow to a tool called Thaditor, where content can be edited as easily as a Microsoft Word document. Thus, they can easily maintain their website in-house, allowing them to focus on customer service and product development rather than going through rounds of edits and feedback with an expensive outside vendor.

“I realized I was at a time in my life, especially working within the tech sector, that money is not the sole driver for me,” Bhardwaj said. “I wanted to do something larger for society that is impactful. When Mikael contacted me, I realized we both had a passion for what we do and we shared a life perspective, and we’ve incorporated that into our work at Tharzen.”

They have started to see their work pay off, with positive feedback from the first batch of customers they have partnered with.

“Our customers have been very happy,” Mayer said. “”For example, one business wanted their static website in French, English, and Spanish. A few CMS platforms out there have ways of dealing with multi-lingual content but they are cumbersome: you need to understand the source code, label sentences to translate and finally write translations either in source or in a separate dictionary. None of these approaches are user-friendly.”

“After installing and customizing Thaditor with a few lines of code, our business user had a single button to automatically add translations to any text element on their page. This interface is still available in the rendered Spanish and French versions of their webpages. Of course, there is a separate dictionary database, but they never need to edit it directly.”

That simplicity has proven to be a game-changer for their current customers.

“Thaditor is entirely visual,” Mayer said. “You don’t have to move from screen to screen and navigate a complicated interface. You’re able to create drafts and make direct edits yourself, even on your phone. I was watching my kid play at the park recently, and made edits to the Tharzen website right there.”

The potential of Thaditor earned Mayer and Bhardwaj a spot in the Polsky Center’s accelerator program over the summer, which provided funding, dedicated working space, mentorship, and programming so that they could focus solely on the development of Tharzen. The program culminated in a Demo Day, where they received positive feedback from a panel of judges and investors, several of whom have since expressed interest in investing in the company.

As Bhardwaj and Mayer continue to push the company forward, they also announced on Oct. 21 the official launch and general availability of Thaditor 1.0. It is the next step in what they see as a game-changing tool that will drastically improve the efficiency of SMBs and, eventually, enterprise companies as well.

Polsky Entrepreneur-in-Residence Chuck Vallurupalli, a software engineer and executive, has served as a mentor to Bhardwaj and Mayer during the development of Tharzen, and noted that the company is solving problems that have hindered business for decades.

“SMBs continue to face significant hurdles in effectively leveraging their investments in websites and related frameworks,” Vallurupalli said. “Using and updating them to acquire, convert, and retain customers is time consuming, requires professional help and continues to be very expensive. The Tharzen team is passionate about addressing these challenges and making significant progress in providing solutions that are affordable and widely accessible to SMBs everywhere.”

George Chellapa, PhD, who is a manager of technology commercialization at the Polsky Center, worked with Chugh and Mayer to protect the IP, and  currently works with Bhardwaj and Mayer on their efforts to commercialize the technology. He said there is exciting potential for Tharzen to impact businesses of all types.

“I have seen the passion and commitment Aseem and Mikael have for Tharzen, along with the deep knowledge they have of the technology required to power Thaditor,” Chellapa explained. “The next year will be a big one for the company, as they continue to collaborate with the Polsky Center and connect with new customers and investors. Businesses need a tool like this to simplify the process of editing their websites in an intuitive and unintimidating way. It could become a true disrupter in the market.”