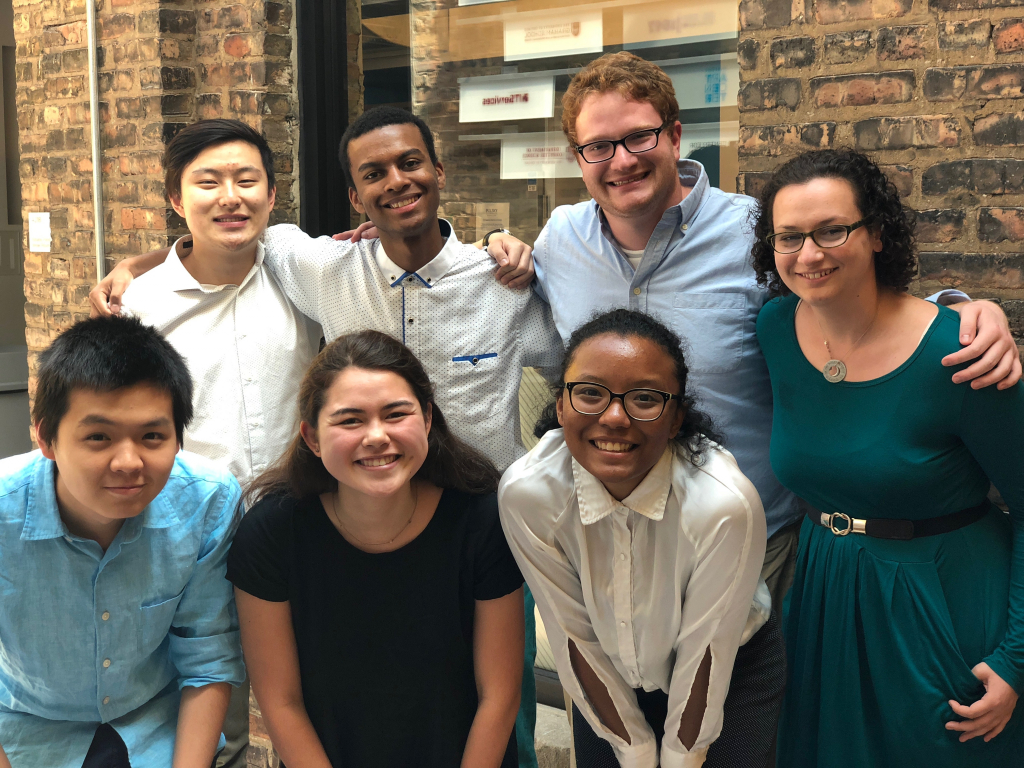 In October 2014, a 34,000 square foot coworking space and facility opened up to not only serve all students, faculty, staff, and alumni of the University of Chicago, but also to be a dedicated resource for innovators and entrepreneurs in the surrounding South Side community without a formal affiliation to the University. Operated by the Polsky Center for Entrepreneurship and Innovation at the University of Chicago, the Polsky Exchange has hosted thousands of workshops, multiple cohorts of startups, and a variety of high profile speakers since opening its doors five years ago.

To celebrate the many innovators who have been supported over the past five years, the Polsky Center will host a special entrepreneurship showcase on Wednesday, October 16 from 5:00 – 7:00 p.m. One company that will be featured at the event is Debate It Forward (DIF), an education nonprofit fostering the practice of empathy in civil discourse especially in student groups often overlooked by traditional debate circuits: young students, students of low income, and students with diagnosed learning or developmental differences. DIF’s revolutionary curriculum works to teach compassion, critical thinking, and public speaking. They hope their programming not only improves students’ confidence and debate skills but also contributes to a more understanding world and a future where progress persists in the face of disagreement.

The Polsky Center spoke with founder Josh Aaronson about his time in the Summer Accelerator and College New Venture Challenge programs.

Polsky: How did you first get involved in the Polsky Center/Polsky Exchange?

Josh Aaronson: As we were starting to turn Debate it Forward into a fully functioning, sustainable 501(c)(3), we turned to the Polsky Center on campus for guidance and for space where we could be surrounded by other like-minded entrepreneurs. Our first big interactions with the Center all surrounded the weekly mentor meetings where we got critical legal, fundraising, and business advice as well as critical connections.

Polsky: What challenges were you able to overcome as a result of Polsky resources?

Josh Aaronson: Thanks to Polsky advisors, programs, and connections, we have been able to transform Debate it Forward from a small, neat sounding idea into a fully functioning non-profit employing 30 individuals. The CNVC was really the first time we had to formally think through our long term growth and business plan, an exercise that is still impacting our work today.

Polsky: How has the Polsky Center impacted your success?

Josh Aaronson: Without the invaluable support of UChicago, Debate it Forward never would have gotten off of the ground – and Polsky has played a large and critical role in that support. Meetings with advisors during the Polsky Summer Accelerator helped us think through our strategic growth and expansion. The advice we got that summer was critical in making our initial growth outside of the Hyde Park area successful.

Polsky: Did other Polsky Companies contribute to the progress of your company? In what ways?

Josh Aaronson: Being a part of both the CNVC and Polsky Summer Accelerator cohorts was incredibly beneficial for the programming itself but also for the ability to connect with other entrepreneurs. From Vinay at Veda Grace connecting us to a curriculum specialist to Marley at Modern Reliance connecting us to a videographer, every company we’ve interacted with has lent a good ear and provided a lot of beneficial advice.

Polsky: What would you say to early-stage companies considering becoming a Polsky member or applying to a Polsky program?

Josh Aaronson: I love the phrase “Work smarter, not harder.” For any entrepreneur in any field, there are resources and programs available through the Polsky Center that will help them avoid common mistakes and pitfalls. From providing advice, connections, and even funding, there are a plethora of opportunities to take advantage of with Polsky.

Polsky: What do the next five years look like for Debate It Forward?

Josh Aaronson: For the next five years, Debate it Forward wants to really focus on expanding throughout Chicago – perfecting our staffing structure, curriculum, and logistics. During that period, we hope to expand to over 100 schools in order to work with over 5,000 students per year. Additionally, we want to source and prepare a national roll-out of our program.

Polsky: What is your favorite Polsky memory?

Josh Aaronson: The CNVC was a really special experience through and through. Despite the fact that it was an inherently competitive class with the prize money at the end, I have never gotten closer to a cohort of classmates. We were constantly helping each other think through strategic issues and giving feedback even though it actively hurt our own chances to “win.” With a great cohort, experienced mentors and judges, and a phenomenal teacher in Starr, the CNVC was one of my favorite classes, Polsky memories, and overall UChicago memories.