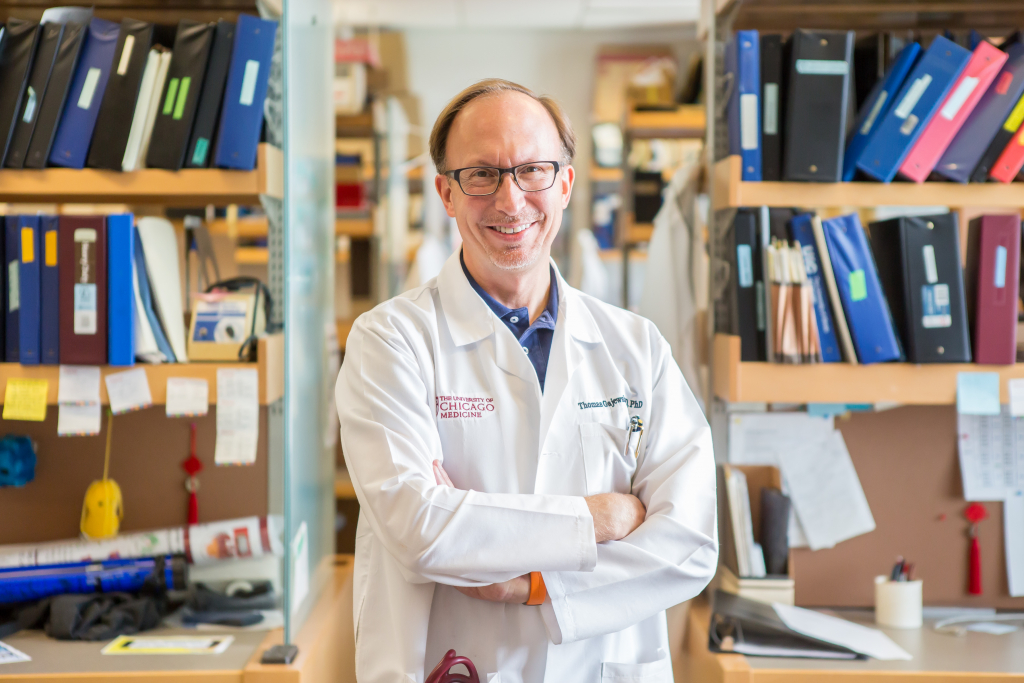 Thomas Gajewski, AB,PhD, MD, AbbVie Foundation Professor of Cancer Immunotherapy in the Departments of Medicine, Pathology and the Ben May Department for Cancer Research at the University of Chicago, founded Pyxis Oncology, a new immunotherapy startup that received a venture investment from the UChicago Startup Investment program.

Pyxis Oncology, a newly formed immuno-oncology company founded by Thomas Gajewski, AB ’84, PhD ’89, MD ’91, AbbVie Foundation Professor of Cancer Immunotherapy in the Departments of Medicine, Pathology and the Ben May Department for Cancer Research at the University of Chicago, is the sixth recipient of a venture investment from the UChicago Startup Investment Program. The company, which is focused on developing a new family of antibody-based immunotherapies derived from novel insights into the biology of the tumor microenvironment, received $300,000 from the University of Chicago as part of its $22 million Series A round, led by Leaps by Bayer.

Pyxis joins ExplORer Surgical, Tovala, Foxtrot, Ascent Technologies, and AMOpportunities in receiving an investment from the University of Chicago through an initiative in which the University co-invests alongside established venture funds in startups led by UChicago faculty, staff, students, and alumni. Back in 2016, the University set aside $25 million from its endowment to invest in startups raising early funding rounds. The Office of Investments, which manages the University’s endowment, oversees the UChicago Startup Investment Program with support from the Polsky Center for Entrepreneurship and Innovation.

Pyxis was founded by Dr. Gajewski in partnership with Longwood Fund and John Flavin, a seasoned life sciences entrepreneur. Additional institutional and strategic investors joined Leaps by Bayer in the company’s Series A financing, including Agent Capital, Ipsen Ventures, and Longwood Fund.

From Lab to Startup
For more than two decades, Dr. Gajewski has studied the role of T cells in the body’s defense against cancer and, for the past 11 years, the Polsky Center has supported him in the licensing and commercialization of many of his discoveries. Dr. Gajewski’s insights are being applied by Pyxis to the development of a pipeline of antibodies aimed at newly discovered immuno-oncology targets. This could potentially create a new way to treat patients that do not respond to currently available therapies.

Dr. Gajewski developed the concept for Pyxis in partnership with the technology commercialization team at the Polsky Center, which works closely with researchers to help them transform their ideas and discoveries into products, services, and ventures. Dr. Gajewski has worked with the Polsky Center on licensing a variety of discoveries and launching several life sciences startups.

“Translating immunotherapy research into novel applications that directly improve outcomes for cancer patients has been incredibly important to me,” said Dr. Gajewski. “The Polsky Center has played a key role in accomplishing this goal by helping to commercialize a variety of patents and discoveries. Their infrastructure, industry connections, and operational guidance during the development of Pyxis has been similarly vital.”

Thelma Tennant, PhD ’03, oncology lead for technology commercialization at the Polsky Center, has collaborated with Dr. Gajewski for more than 10 years to commercialize and license his discoveries.

“Dr. Gajewski is a globally-recognized leader in oncology research, and his discoveries have delivered results that are both scientifically and clinically relevant” Tennant said. “The Polsky Center has worked closely with him to advance his discoveries towards the clinic and we are honored to have supported the creation and launch of Pyxis Oncology. We are thrilled to work with this accomplished group of founders and investors to help turn this vision into reality.”