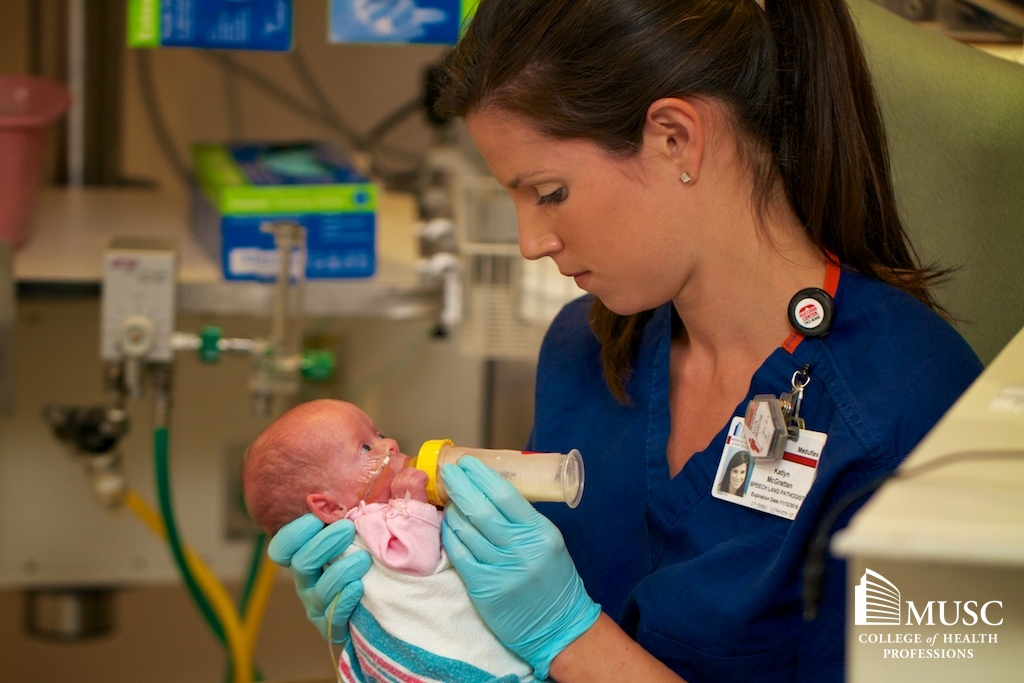 Now that technology can save the lives of premature babies weighing less than a pound at birth, Chicago researchers are trying to deal with one of the preemies’ most vexing problems: Choking while bottle-feeding.

Finding a solution obsesses Katlyn McGrattan, a clinical scientist at Boston Children’s Hospital, who is leveraging resources at the University of Chicago’s Polsky Center for Entrepreneurship and Innovation to test solutions.

She and her team participated in the Polsky I-Corps program, which provides a $2,500 National Science Foundation (NSF) grant for seven weeks of work on commercially viable breakthroughs.

Their goal is to create a “smart” baby bottle that could quickly detect both a premature baby’s feeding success — or lack thereof. A preemie is born before 37 weeks, compared with a normal 40-week pregnancy. The baby bottle’s sensor intelligence would give immediate, detailed feedback on the baby’s feeding, compared with today’s guesswork and invasive X-ray that’s done only once and then only after a baby reaches the 40-week full-term stage.

The bottle would analyze a baby’s sucking and swallowing to identify any otherwise undetectable problems like milk going into the baby’s lungs. If there is an issue, the bottle alerts the feeder so he or she can provide an intervention, like using a slower-flowing bottle nipple, and then test the treatment’s effect. The result would be a way to optimize the baby’s safety as he or she learns how to eat.

The results could be enormous: Nearly 90 percent of U.S. preemies now stay, on average, 16 days in the hospital at a cost of $3,000 to $4,000 a day. The quicker doctors and family members realize the problem, the better. The result? A healthier, thriving baby, more confident parents, and millions in healthcare cost savings. The nuBorn Medical bottle could also track the infant’s progress and alert parents when there’s an issue requiring them to take the baby back to the doctor.

Additionally, the smart baby bottle could help infants with Down Syndrome, cerebral palsy and congenital heart defects who have bottle-feeding problems.

By herself, McGrattan had been left to rig up one-of-a-kind prototypes that were too complicated and time-consuming for nurses and parents to concoct on their own. While doing research at Northwestern Medicine’s Prentice Women’s Hospital, McGrattan eventually met Lindsay and Dahlstrom at a casual “happy hour.” She mentioned her work, and the two men were hooked.

“We sat on the roof of Katlyn’s apartment at the Air and Water Show and talked for four hours,” Lindsay said. “My wife is a pediatrician. I remember that I ran home to tell her about it. I was so excited.”

McGrattan’s interest in this problem area began during her master’s degree observations in neonatal and pediatric intensive care units. She describes the heartbreak she felt as she witnessed the devastation that families experienced when they couldn’t feed their babies.

As Dahlstrom pointed out, babies’ feeding problems are a mystery to nurses and caregivers.

“[Babies] aren’t going to cough if formula goes into their lungs,” he said. “It’s a terrifying concept for parents. A lot of these infants will stop breathing regularly during a feed.”

Yet a family feeding a baby “is such an innate human need,” McGrattan said. “I saw that there was a huge void – there was minimal to no research to guide clinical care in feeding premature babies.”

Babies born prematurely experience other complications, too, such as immature lungs, slower-than-normal weight gain and difficulty regulating their body temperature.

The team is currently working with Polsky Center resources to develop a sensor-enabled baby bottle that could become a routine tool for neonatal ICU nurses, and eventually be sold for home use under the company name nuBorn Medical. Dahlstrom has been able to build reproducible prototypes using 3D printing and prototyping at the Polsky Fab Lab. And they honed the smart baby-bottle concept by competing in the Edward L. Kaplan, ’71, New Venture Challenge. 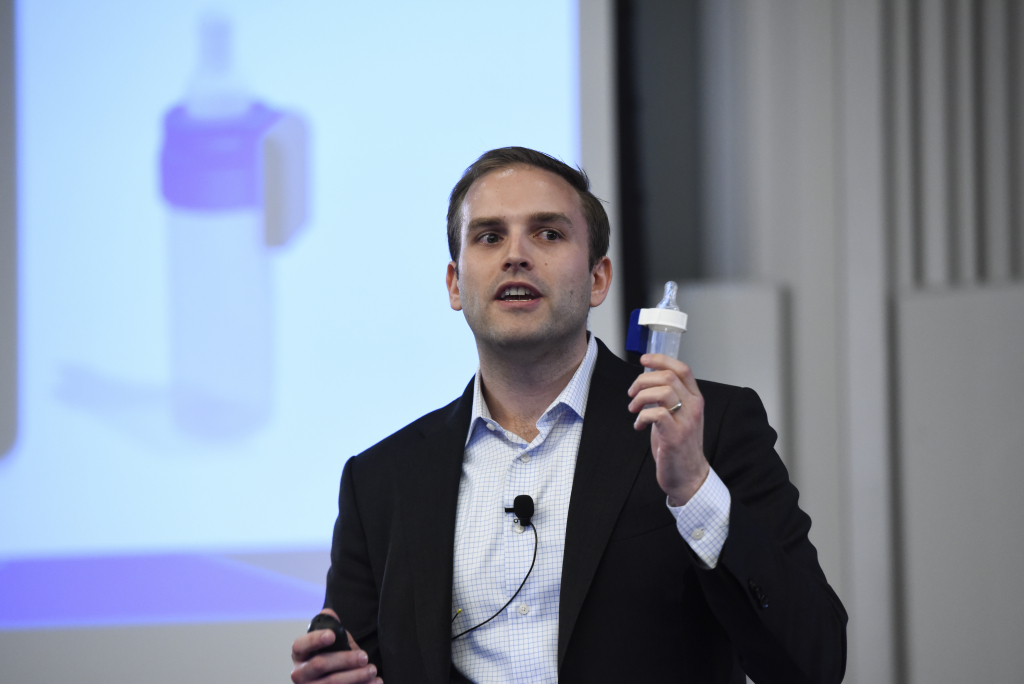 The New Venture Challenge helped the team develop ties with industry experts, potential investors and other entrepreneurs, Lindsay said. And now, nuBorn Medical is one of five finalists the Polsky Center selected to present its invention to the George Shultz Innovation Fund advisory committee and public audience on December 6.

For now, McGrattan has been empowered with the team approach – though it’s admittedly taken her out of her comfort zone – and with getting vitally needed resources into parents’ and nurses’ hands.

“In academia, you look down a very narrow path of science and publish, science and publish,” she said. “You focus on clinically important topics. But often there’s a huge void in the ability to provide clinicians with things we see immediately. It’s been a really fun merger of research, health care and making a business case.”