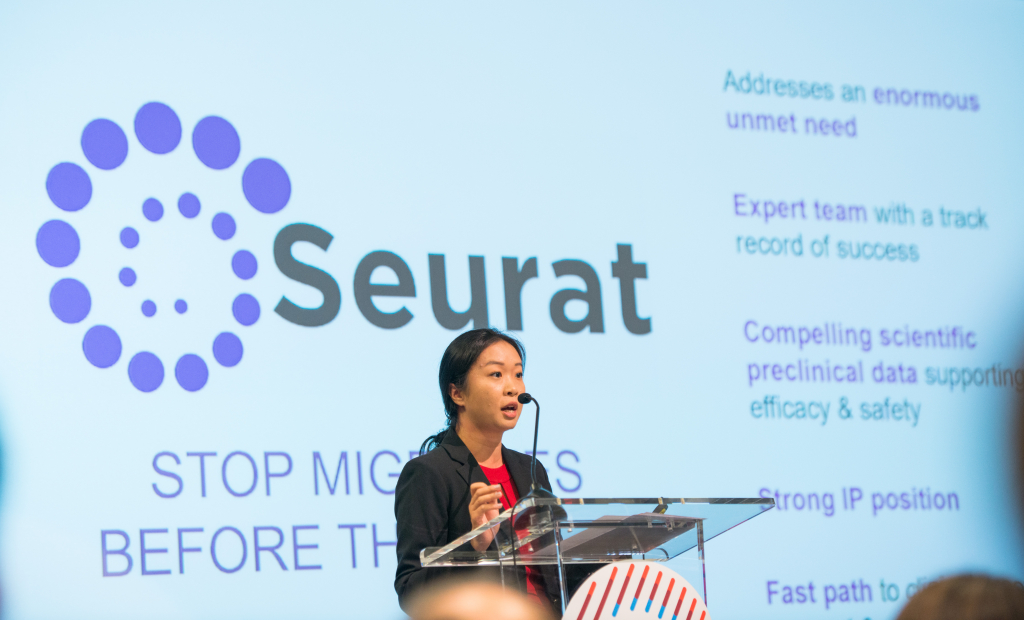 Yuan Zhang on stage describing Seurat’s unique approach to treating migraines at the October 2 industry showcase hosted by the Polsky Center as part of the 2018 Chicago Venture Summit.
(Photo by Jean Lachat)

Seurat Therapeutics, Inc., a University of Chicago startup biotech company developing a nasal spray to treat and prevent migraines, has been awarded a $509,720 small business grant from the National Institute of Neurological Disorders and Stroke, the company announced today.

The grant enables Seurat to continue to commercialize their technologies and progress toward human clinical trials. This funding brings the total amount raised to date to $1.3 million.

The drug, when delivered through the nose to rats, stops the underlying cause of migraines. The drug dampens the cause of so-called oxidative stress, which causes neurons in the brain to over-activate, leading to severe headaches.

Most other migraine medications on the market today attempt to treat the symptoms after a migraine begins.

“We believe Seurat’s solution will be the first treatment to address the underlying cause of migraines, rather than just the symptoms of severe pain and life-altering disability,” said Yuan Zhang, Seurat’s co-founder and CEO, who received her Ph.D. in molecular medicine and masters in translational medicine from the University of Chicago. “Migraines affect one in 10 people in the United States and is so debilitating, yet has limited treatment options suggesting a great unmet need for an innovative approach.”

“We’re working on a simple solution to a very complex problem,” said Dr. Richard Kraig, the William D. Mabie Professor in the Neurosciences at the University of Chicago, the director of the Migraine Headache Clinic at UChicago Medicine and Seurat’s co-founder and chief scientific officer. “We think this treatment can safely prevent migraines for the millions of frequent and chronic migraine sufferers.”

The company’s licensed proprietary treatment is based on several inventions patented by Dr. Kraig after decades of laboratory work.

Seurat has benefitted from multiple programs at the University aimed at launching new companies. The university’s Innovation Fund has invested $250,000, and Seurat was a finalist in the Edward L. Kaplan, ’71, New Venture Challenge, run by the Polsky Center for Entrepreneurship and Innovation and the Chicago Booth School of Business. The New Venture Challenge is the top university-based startup accelerator competition in the United States.

The company works out of the Polsky Center’s startup business incubator on 53rd Street in downtown Hyde Park, the Polsky Exchange. The company benefits from mentoring by the Chicago Innovation Mentors, PROPEL and MATTER, a Midwest-based community of healthcare innovators located in downtown Chicago.