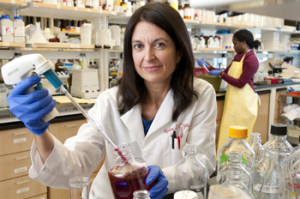 Moving a basic scientific finding from a lab to the clinical setting is the Holy Grail for medical researchers the world over. Suzanne Conzen, MD, professor of hematology/oncology at the University of Chicago, is expediting that process with a rare investigator-initiated Phase I clinical trial for a novel approach to breast cancer therapy that she discovered.

The therapy targets a subtype of breast cancer that currently has no specific therapy regimen and is characterized by early relapses: so-called “estrogen receptor-negative” breast cancer, which involves a tumor that is not fueled by estrogen. That includes about 25 to 30 percent of the 230,000 women diagnosed with breast cancer every year.

Conzen is able to expedite the bench-to-bedside process because the therapy she is testing uses a pharmaceutical agent that is already approved for clinical indications in humans.

“Due to her industry ties as well as her excellent reputation as a researcher and clinician, Dr. Conzen was able to secure the drug and placebo at no cost from the manufacturer,” says Heather Walsh, project manager at UChicagoTech, the University of Chicago’s Office of Technology and Intellectual Property.

Conzen and Rita Nanda, MD, an assistant professor of hematology/oncology at the University, wrote a clinical trial protocol that has been approved by the Food and Drug Administration and the University’s Institutional Review Board. Support for research nursing during the trial is being provided by the University of Chicago’s Comprehensive Cancer Center using National Institutes of Health (NIH) funds. An NIH-funded Clinical and Translational Science Award is providing additional support for Conzen and Nanda to analyze enrolled patient samples to address key scientific questions during the trial.

Conzen credits UChicagoTech for helping her get this project off the ground. When she first approached UChicagoTech about her basic scientific findings and their potential application as a new therapeutic approach for breast cancer, she was surprised to learn that her idea was patentable.

“I’m not accustomed to thinking about such things,” she says. “Now when I speak with other faculty members about their promising research findings, I suggest that they reach out and contact UChicagoTech.”

Meanwhile, Conzen has relied heavily on Gini Fleming, MD, director of the Medical Oncology Breast Program and the Cancer Clinical Trials Office, both at the University, to navigate the regulatory process that is such a challenging part of an investigator-initiated clinical trial.

As is often the case, Conzen came across her findings by accident. While trying to identify signaling pathways that prevent estrogen-independent breast cancer cells from dying, she discovered that the stress hormone cortisol activates pathways in these cells that allow them to survive chemotherapy designed to kill them.

Using gene expression data from the tumors of more than 1,000 breast cancer patients, Conzen determined that a tumor’s glucocorticoid receptor expression correlated with early relapse in those breast cancers lacking estrogen receptor expression. This finding is consistent with the notion that the glucocorticoid receptor activates a tumor cell survival pathway. Thus, targeting this receptor with an antagonist is predicted to make chemotherapy more effective by enhancing its power to kill cancer cells.

Conzen went on to demonstrate that compared with chemotherapy treatment alone, co-treatment with chemotherapy and a glucocorticoid receptor antagonist slowed the growth of breast cancers in a mouse model by about 50% (see graph below). The antagonist she used was mifepristone, a repurposed drug being developed by Corcept Therapeutics. 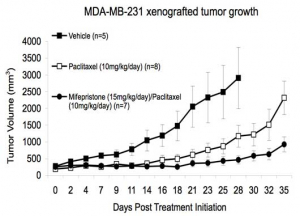 Co-treatment with chemotherapy and a glucocorticoid receptor antagonist slowed the growth of breast cancers in a mouse model by about 50%. Graph courtesy of Dr. Suzanne Conzen

Korlym (Corcept’s proprietary name for mifepristone) was recently approved for patients with Cushing’s syndrome who have type 2 diabetes or glucose intolerance and are not candidates for surgery or who have not responded to prior surgery. In Conzen’s preclinical studies and in the Phase 1 clinical trial, mifepristone is used in conjunction with the chemotherapy drug paclitaxel.

“This is a very promising project because at this stage in our efforts to market a new technology we do not usually have such strong animal model data or a clinical trial in progress,” Walsh says. “This project has great potential for the University and for a large, underserved group of patients.”

It’s hard being a practicing physician, basic researcher and, now, nascent businessperson at the same time, Conzen concedes. “That’s a lot of balls to keep in the air, but I find it absolutely irresistible. Combining all of these things is not possible at very many places, but it works well at the University of Chicago.”

This combination of basic science and entrepreneurial assistance makes it more likely that I will be able to help patients, which is the ultimate goal of every physician-scientist in cancer biology,” she concludes.