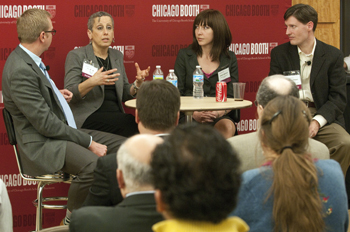 The Innovation Workshop at Chicago Booth featured experts on how to use the Small Business Innovation Research program creatively to launch start-ups at universities. From left: Matthew Christian, moderator, and Lisa Kurek, Heather Steinman and Michael Poisel. Photo by Lloyd DeGrane

With venture capital for start-ups in the life sciences dried up in the Midwest, innovative faculty, promising inventions and would-be entrepreneurs are looking for new ways to fund the commercialization of their ideas—to bridge the gap between the laboratory and the marketplace.

“The whole area is up in the air, and everyone is looking for new funding models,” said Alan Thomas, director of UChicagoTech, the University of Chicago’s Office of Technology and Intellectual Property, at “Funding and Commercializing Research: A New Approach,” an Innovation Workshop. Fortunately, there is $2.5 billion available per year from the Small Business Innovation Research/Small Business Technology Transfer program, he said. “This is the single biggest source of gap, or proof-of-concept, funding currently available.”

The Innovation Workshop at Chicago Booth on February 2, 2012, featured three experts on how to use this program creatively to launch start-ups at universities.

SBIR/SRRT is a highly competitive federal program that encourages domestic small businesses to engage in research that has the potential for commecialization. It funds only 15-25% of applicants for Phase I grants, which cover feasibility and commercial potential. “These numbers are sobering but they will likely get worse since some of the funding agencies, including the National Institutes of Health, the biggest one, are suffering bottlenecks,” said Lisa Kurek, managing partner at Biotechnology Business Consultants. “Knowing what to do is more important than ever.”

Panelists covered the basics, such as:

But the workshop was far more than a primer, with the panelists offering many insights. Asking for money to do more science used to work, Kurek said. Now, the SBIR/STTR program looks for applicants that will commercialize a product. “Researchers tend to think that it’s all about science, but grant reviewers will tell you that if your application is only about science, don’t bother applying,” she said.

Furthermore, collaboration is key. For instance, the National Science Foundation recently added a request that SBIR/STTR grant applications include three letters of commitment from commercialization partners.

Sometimes the best way to secure a grant is to apply through another company that is already established and might even have an SBIR/STTR track record, the panelists said.

UPSTART, a new-company incubation program at the University of Pennsylvania’s Center for Technology Transfer, helps faculty strengthen their grant applications by engaging corporate sponsors from the beginning of the process.

“We reach out to corporate partners that may have a similar interest with a promising new company,” said Heather Steinman, senior advisor at UPSTART, which has started 50 companies in two and one-half years.

UPSTART also recruits experienced entrepreneurs. “Every chance we get we talk about our ‘business in a box,’—companies that are ready to go but need an entrepreneurial leader,” said Michael Poisel, UPSTART’s director. “We’re picky, however. After speaking with more than 300 entrepreneurs, we’ve hired only 23.”

The panelists agreed that the most important thing is to aim at forming a successful company rather than getting a grant. “I like SBIR/STTR grants for many reasons but money is only one of them,” Kurek said. “The application process forces a company to analyze its technology and focus on its goals. Even applicants who are rejected benefit from that process.”

In addition, science itself benefits from the cycle of preparation, application, review, acceptance or rejection, a new product, and further research.

“A lot of people think of commercialization as separate from research, but there’s a cycle whereby commercialization of a product integrates with and moves the underlying research forward,” said Matthew Christian, moderator of the panel and assistant vice president for Research Program Development and co-director of Arete. “Over the long term, we need to think of translational research as something that feeds back into research.”

Developed by the Polsky Center for Entrepreneurship at Chicago Booth and UChicagoTech, the Innovation Workshop Series was created for University researchers, innovators, entrepreneurs and investors to educate, network and facilitate the best practices for commercializing the University’s technology. This workshop was cosponsored by Arete.