A New Approach to Migraine Therapy 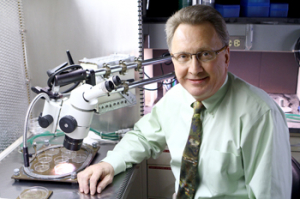 University of Chicago researchers are opening a new front in treating migraine that could hold out hope for millions with the painful, debilitating condition—by mimicking the protective effects of physical and mental exercise, and social activity on the brain

Thirty million Americans suffer from migraine—that’s one person in every four U.S. households. The annual economic toll amounts to $30 billion from health care costs and lost productivity. And this doesn’t begin to capture the human toll of misery and suffering: Attacks can last up to 72 hours at a time, are characterized by an acute nausea-inducing throbbing sensation that is compounded by physical exertion (confining many sufferers to bed), and may be accompanied by temporary sensory and cognitive impairment.

While mild symptoms may be alleviated through over-the-counter medications or a family of prescription drugs known as triptans, relief is more elusive for hard-core sufferers, of which there are a considerable number; nearly five million Americans complain of at least one attack a month, and 11 million report being at least partially incapacitated by the condition at times. Beta blockers, calcium channel inhibitors, and anticonvulsant medicines used to treat high-frequency, chronic sufferers are often ineffective. Moreover, for those who do benefit from them, relief can come at a price that includes nausea and addiction, among other side effects.

It is a grim calculus that William D. Mabie Professor in the Neurosciences Richard P. Kraig, PhD, MD, is hoping to shift. Kraig and his team—graduate students Aya D. Pusic and Yelena Y. Grinberg plus senior technician Heidi M. Mitchell—have developed a new approach to treating migraine that in initial lab studies has demonstrated considerable promise in stopping the mechanisms that trigger the condition in the first place.

The work, for which Kraig has filed a provisional patent application, takes its cue from the use-it-or-lose-it hypothesis of brain health. This is backed by growing evidence that physical and mental exercise and social activity—so-called “environmental enrichment”—promote neurological resilience.

Migraine is typically preceded by a spike in brain activity (analogous to what occurs in a seizure, hence the effectiveness of anticonvulsants for some sufferers). This sets in motion a syndrome picturesquely dubbed “spreading depression,” a temporary loss of brain function thought by most scientists to be the immediate trigger of an attack.

“It’s like dropping a pebble in a pond,” explains Kraig. “The ripples just propagate out from where you dropped the stone, but with those ripples come a loss of brain activity.”

This “negative wave” stimulates chemicals that radiate outward from the brain to the sensitive nerve endings swathing the meninges (the membranous matter encasing the brain) and are experienced as intense pain.

To this end, they have identified three cytokines, regulatory molecules that convey signals between cells, which act individually to raise the threshold of excess brain excitability needed to trigger spreading depression—decreasing the likelihood of an attack.

Carefully administered, the cytokines accomplish this by simulating the effect of environmental enrichment by temporarily elevating brain activity. Such discrete, controlled bursts of brain activity, punctuated by periods of recovery, function like neural calisthenics, Kraig says, building resilience to spreading depression. “When you do enrichment, you strengthen the brain through pattern-specific, memory-specific increased excitability. That’s what these agents did in our studies—mimic what enrichment does naturally.”

The project has attracted the notice of UChicagoTech, the University’s intellectual property arm, which is helping Kraig navigate the patent application process and courting interest from potential industry partners. “It was compelling to us that Dr. Kraig’s work was well-positioned to be translational, though it is still at a relatively early stage,” says Adam Conway, PhD, JD, project manager at UChicagoTech.

The cytokines are already in use for other conditions. “That presents an opportunity for us to go to the companies producing these therapies and say, ‘here’s another therapeutic area you might be interested in,’” says Thelma Tennant, PhD, associate project manager at UChicagoTech.

For more information, please visit the website of The University of Chicago’s Medical Center.