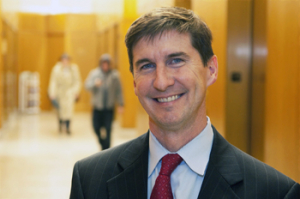 A superhighway runs into Chicago’s leading universities, carrying innovative scientists, talented students and significant research funds, says John Flavin, the new executive director of Chicago Innovation Mentors (CIM). “We need to match that with a superhighway to carry the fruits of this research out into the marketplace.”

Co-founded by the University of Chicago, Northwestern University, University of Illinois at Chicago and iBIO® Institute, CIM is a multi-institution initiative that cultivates university-based biomedical and healthcare commercialization by matching experienced entrepreneurs, executives and domain experts with innovating faculty. CIM celebrated the completion of its first year in November 2011.

“CIM has exceeded everyone’s expectations in its first year,” says David Miller, president of iBIO Institute. “By focusing on very early-stage ideas, CIM is building a critical web of support for entrepreneurs and nascent, fragile companies.”

“Chicago has many assets and people who are coming together to create an emerging biotech center,” Flavin says. “One of the key gaps, however, is the number and experience of entrepreneurs who can commercialize technologies from Chicago’s universities.”

So far, CIM has matched 72 mentors with 29 active ventures, and Flavin expects those numbers to grow significantly. Every month representatives from the founding universities and iBIO Institute’s PROPEL® Center meet, and several entrepreneurs from these organizations present prospective ventures to mentors, some of whom volunteer to advise the projects. As the backlog of promising ventures from these four organizations is reduced, CIM will add other institutions to build a more robust pipeline of translational research projects.

“You’re only as strong as your community,” says Alicia Löffler, executive director of INVO at Northwestern University. “We participate in CIM because one university alone does not have enough critical mass to attract key players, interested investors and potential partners. Together, however, local universities can not only benefit from each others’ points of view and complement each others’ strengths but, most importantly, make the entire region more attractive to researchers and investors.”

Progress at CIM will be gradual and hard to quantify, Flavin says. Adapted from the Massachusetts Institute of Technology’s 11-year-old Venture Mentoring Service, CIM participates in a user group of affiliated venture mentoring services that share best practices and develop metrics to measure success. CIM’s ultimate goal is to help ventures obtain patents, license intellectual property, raise capital, form partnerships and launch companies with viable products and services. Several faculty say that CIM has helped them along this road.

“I have greatly appreciated the time, effort and thoughtfulness that my mentors have dedicated to help me develop the most sensible strategic path forward with my technology,” says Joel Collier, assistant professor of surgery at the University of Chicago, who is working with short peptides that self-assemble to form immunogenic materials potentially useful for vaccine development.

And Scott Stern, assistant dean of technology at the Pritzker School of Medicine and chief medical advisor at Agile Diagnosis, a new company developing a point-of-service web application that helps health care providers diagnose medical problems, had this to say about CIM: “The mentors were exceptionally helpful and gracious with their time.”

Although some of CIM’s ventures do not succeed, they all provide lessons learned and useful experience for the participants, Flavin says. “As faculty members float ideas and work with their mentors, they learn what is and what is not a feasible product or service. Often they come right back with a more carefully honed idea.”

This growing expertise will boost the translation of University research when venture capital becomes more plentiful in the biomedical sector. Early-stage capital has all but disappeared from the biomedical market, especially in the Midwest, Flavin says. “We want to get capital flowing again, and the way to do that is to show pharmaceutical companies, device manufacturers and healthcare providers that we have a juggernaut for new drugs, devices and diagnostics.”

Founder and managing director of Flavin Ventures, Flavin has 20 years of experience in life sciences focused on finance and operations. He guest lectures at Chicago Booth in biotechnology entrepreneurship, has led two successful biotech initial public offerings, and has raised more than $220 million in private and public funding.

“John Flavin is just the right person to lead CIM because he has a lot of experience leading start-ups and he has tremendous credibility in the biotech community,” Miller says.

Flavin is joined by Martha Wade, an experienced Operations Manager who was recently hired full-time to increase support to the initiative, thanks in part to a grant funded by the Chicago Biomedical Consortium with support from the Searle Funds at The Chicago Community Trust.

CIM is not happening in isolation, Miller points out. For example, the Illinois State Legislature recently instituted a 25% tax credit for angel investors and replenished the Technology Development Account, which disperses funds to qualified Illinois venture capital groups.

“It’s all part of a growing ecosystem that is nurturing would-be biotech entrepreneurs in this region of the country,” he says.