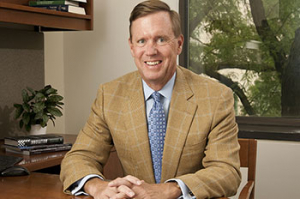 Whether it comes to medical devices, therapeutics or pharmaceuticals, Richard Ganz brings a rich background, widespread knowledge and 30 years of experience to help University of Chicago researchers translate their ideas into products, services and new business ventures.

In January, Ganz joined three other executives-in-residence at UChicagoTech. Together the team plays a vital role in helping the University’s Office of Technology and Intellectual Property foster innovation and further the entrepreneurial spirit at the University.

“Alan Thomas and I first got to know Rich when he was brought in to lead Aarvon Biosciences, a University of Chicago start-up based on a product opportunity for which one of our faculty, Jonathan Miller, was an inventor,” says David Tiemeier, deputy director of UChicagoTech. (Thomas is the director of UChicagoTech, and Miller, MD, is a professor and vice chairman of pathology at the University.)

“Rich’s work on that venture combined with his experience at Baxter and Abbott led us to invite him in as a consultant to help with a potential big pharma collaboration. Then, over time, we found ourselves wanting to involve him in more and more of our projects.”

Ganz has helped Shohei Koide strategize about a new technology that the professor of biochemistry and molecular biophysics at the University developed to improve the lives of dialysis patients. The technology uses monobodies—genetically engineered proteins that are able to bind to antigens—to capture beta-2 micro-globulin in a dialysis circuit and thereby help prevent dialysis-related amyloidosis, which contributes to end-stage renal disease.

In addition, Ganz has helped Ralph Weichselbaum, MD, and Steve Kron, MD, with a new effort aimed at improving the effectiveness of therapy using drugs that sensitize the body to radiation.

Most of Ganz’s time, however, has been spent helping to develop UChicagoTech’s growing Innovation Fund. Organized and run by UChicagoTech, the Fund awards University grants to support proof-of-concept studies and the commercialization of promising research ideas.

“I’m trying to cultivate some corporate sponsors in the pharmaceutical arena that would participate in the Innovation Fund by donating not only financial capital but also intellectual capital,” Ganz says. “By intellectual capital I mean analysis of the potential fit in the marketplace of a new product or help in determining precisely what an interested partner might want to see in a new product before investing.”

Despite having a full-time job in Boston, serving as an Executive-in-Residence at the Cleveland Clinic and sitting on six boards, Ganz somehow finds the time to fly regularly to Chicago and work at UChicagoTech.

“I make time for this because I feel very committed to UChicagoTech,” he says. “In addition, the University of Chicago is a fascinating place to work. It’s very rewarding to be able to interact with world-class faculty members who are working on ideas that could transform patient care.”

Prior to coming to UChicagoTech, Ganz was CEO of OmniSonics Medical Technologies, which developed medical devices used to treat vascular occlusive diseases. Currently, he is CEO of Reflectance Medical, which specializes in noninvasive monitoring of patients that measures tissue oxygenation rather than relying on traditional vital signs. The U.S. Army funds that research since the technology can be used to monitor fallen soldiers on the battlefield.

“Engaging Rich as an Executive-in-Residence has worked out very well,” Thomas says. “He’s been particularly effective in helping us connect research faculty with clinical resources and expertise, both inside and outside the University.”