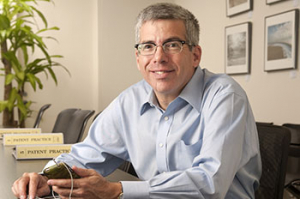 As an Executive-in-Residence at UChicagoTech, Joseph Feldman has had many “aha” moments helping to build a more entrepreneurial spirit at the University. One came last year when Feldman and others reached out to Northwestern University and the University of Illinois Chicago to create a multi-institutional program to match teams of experienced mentors with early-stage innovators.

“There was some skepticism about whether this would work, but it turns out that we were pushing on an open door,” Feldman says. “We found that those institutions were facing surprisingly similar challenges as we were attempting to commercialize technology. We’ve been working with them side-by-side on Chicago Innovation Mentors ever since.”

Another “aha” moment came when Feldman approached a contact at Baxter in charge of licensing technology from universities.

“Those guys at the University of Chicago are tough to work with,” said the Baxter executive, noting that Baxter had recently conducted substantial research collaborations with NU and UIC.

Refusing to take “no” for an answer, Feldman asked for a “chance to make something happen.”

The executive agreed and gave Feldman a “shopping list” of technologies that Baxter was interested in pursing. Feldman used the list to develop a robust catalog of information about University researchers, programs and intellectual property that might match Baxter’s interests.

“We found an overwhelming number of fits on both sides,” Feldman says.

UChicagoTech ushered the project along for several months, and Baxter now funds an oncology program in the laboratory of Richard Quigg, MD, director of the Functional Genomics Facility at the University of Chicago.

“We hope other partnerships will come out of the nascent relationship with Baxter,” Feldman adds.

Such is the work of an Executive-in-Residence at UChicagoTech, the University of Chicago’s Office of Technology and Intellectual Property. Feldman took on this role, which keeps him busy about one day per week, because of previous business collaborations with UChicagoTech’s leaders. While Feldman was vice president of business development at Chromatin (a biotech company that grew out of research at the University that develops technologies and products for agricultural, energy, chemical and pharmaceutical markets), he worked with Alan Thomas, director of UChicagoTech. And while vice president in global business development at Searle, Feldman worked with David Tiemeier, who was then at Searle and is now deputy director of UChicagoTech.

“From our days together at Searle, I’ve known Joe to bring a strong business background, a candid and constructive perspective, and a high level of enthusiasm to every project he touches,” Tiemeier says. “He’s just the kind of individual we wanted to engage when we began the Executive-in-Residence Program.”

In addition to working at Searle and Chromatin, Feldman has worked at Monsanto, NutraSweet and First Genetic Trust. He co-founded Sandbox Industries, a business startup company, and has corporate experience with finance, investing, operations and business development. Currently president of Joseph Feldman Associates, a business-development consulting firm, Feldman concentrates on helping companies launch, grow and develop their businesses.

Activities at UChicagoTech include the Innovation Fund, where Feldman provided a benchmarking study of comparable programs at other leading universities, and Southside Health, where he helped evaluate potential commercial opportunities and partners. Feldman has also helped UChicagoTech explore licensing and company startup opportunities for microfluidics and electronic medical record technologies developed by University researchers.

When asked why he works at UChicagoTech, Feldman replies that he enjoys the people and sees an opportunity to help the University realize its ambitions to increase its commercialization of technologies. He has discovered that this an exciting time to be associated with the University.

“Although University of Chicago has always seen itself as having a big impact on the world, it has traditionally avoided the â€˜messy’ side of commercializing research and intellectual property,” Feldman says. “With leadership emerging from several directions, more members of the University are beginning to tolerate, even embrace, an entrepreneurial spirit.”