Giving Back to Chicago and the University 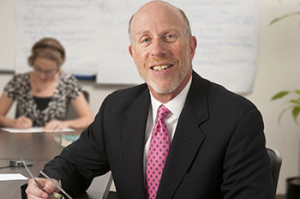 Knowing that the top areas in the country for biotechnology innovation and entrepreneurship are San Francisco, San Diego and Boston-Cambridge, many of Chicago’s top researchers might be tempted to move to one of those centers. Not Steven A. Gould, M.D., however.

“That would be giving in,” says the Entrepreneur-in-Residence at UChicagoTech, the University of Chicago’s Office of Technology and Intellectual Property. “I’m frustrated that Chicago is not recognized for its creative research and its success at launching and building biotech and life science companies, so I’m working to help get Chicagoâ€”where I have a sense of pride and ownershipâ€”the status and recognition it deserves.”

Gould believes that Chicago has everything needed to become one of the country’s premier centers for biotechnology and life sciences: cutting-edge research at the university level, plenty of industry looking for new products, ample investment capital and unlimited management talent.

That notion led Gould about a year ago to offer his considerable skills to UChicagoTech and other local universities. “I was very impressed to find how UChicagoTech is transforming its tech transfer office into an innovation center.”

Gould began his new involvement by becoming a founding mentor in the Chicago Innovation Mentors created by those four institutions. CIM cultivates an environment for commercialization of university biomedical technologies by matching experienced entrepreneurs, executives and domain experts with innovating faculty. Mentors work as volunteers in teams to provide balance and diversity of experience.

After that, Gould became an Entrepreneur-in-Residence (EIR) at the University of Chicago. “I wanted to give back,” he says, “and this allowed me to share my knowledge and experiences.”

That base is very broad, encompassing academic medicine, management, government regulations, clinical trails, public and private financing and start-ups. Before starting his own consulting firm in 2010, Gould was a scientific founder and CEO of Northfield Laboratories, a publicly traded biotechnology company focused on developing a blood substitute. Prior to that he was chief of surgery at Michael Reese Hospital and Medical Center and professor of surgery at the University of Chicago and then UIC.

Known as the interferon-related DNA damage resistance signature (IRDS), the gene signature correlates with susceptibility to chemotherapy and/or radiation therapy. This is based on data previously obtained from fresh-frozen tumor tissue of breast cancer patients.

Gould’s work at UChicagoTech, which keeps him busy a couple of days a week, includes strategizing with the leadership team and the Executives-in-Residence about expanding the scope of activities so that the University can become more innovative and entrepreneurial. He also works with members of the faculty to identify and advance projects that have both clinical and commercial potential, he says.

Specifically, he is working with three researchers:

In addition, Gould is involved with the Hyde Park Angels (a group of angel investors) and the Chicago Booth School of Business, where he mentors students and served as a judge in the most recent New Venture Challenge.

“My underlying goal is to help colleagues advance clinical care and realize commercial potential,” he says.