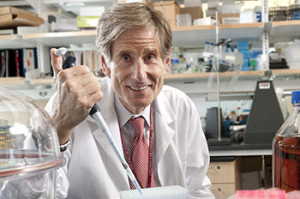 In addition, up to 70% of patients with early-stage, localized breast cancer will not benefit from—and may even be harmed by—one or both of these long, painful courses of therapy. However, both treatments are often prescribed because there is currently no test that can predict whether a particular individual will benefit.

That’s where Ralph Weichselbaum, MD, professor of radiation and cellular oncology at the University of Chicago, and his colleagues come in. As a result of more than seven years of research, they have empirically discovered a gene signature that predicts whether an individual patient would benefit from chemotherapy and/or radiation therapy.

“If this test turns out to be an accurate predictor it could be very valuable to both patients and providers, so our next step is to validate it,” Weichselbaum says.

And that’s where UChicagoTech, the University of Chicago’s Office of Technology and Intellectual Property, comes in. To support the validation process, the University of Chicago just awarded Weichselbaum $50,000 from its recently launched Innovation Fund. Organized and run by UChicagoTech, the Fund awards $25,000-$100,000 to support proof-of-concept studies.

“The Innovation Fund has been successful identifying projects that are already very advanced, scientifically speaking, but that need additional commercial validation before they are likely to gain the interest of potential licensees,” says Adam Conway, the project manager at UChicagoTech who works with Weichselbaum. “This exciting, innovative project falls perfectly into that category. We hope that the data coming out of the newly funded work will tell a story compelling enough to take this test to market.”

Known as the interferon-related DNA damage resistance signature (IRDS), the gene signature correlates with susceptibility to chemotherapy and/or radiation therapy. This is based on data previously obtained from fresh-frozen tumor tissue of breast cancer patients.

Especially important is early data showing that the marker may have predictive characteristics for a variety of additional cancers, including head and neck, breast, lung, prostate and high-grade glioma.

One reason the Innovation Fund decided to support this project is the fact that Weichselbaum is experienced with translational research and has a trained eye for commercial opportunities. He has a long history of disclosure at UChicagoTech, where his name, along with those of many collaborators, is attached to a significant number of promising patents.

Years ago, after Weichselbaum disclosed his initial discovery related to IRDS, UChicagoTech helped him apply for a patent. But it did not stop there. It has continued to work with Weichselbaum to help him advance this predictive test and move it toward possible commercialization.

“We’re not ready to launch a new company around this particular test yet, but I’ve done start-ups before and like them—especially when they’re successful!” Weichselbaum says.