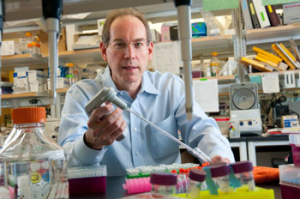 “This award will permit us to build upon our preliminary data to facilitate the development of a promising new strategy to treat acute leukemia.”

The recently launched Innovation Fund awards $25,000-$100,000 to support proof-of-concept studies. During its first year, candidate proposals have been identified and prepared by UChicagoTech, the University of Chicago’s Office of Technology and Intellectual Property for review by an external advisory committee. The vision is that the Fund will mature to the point that $1 to $2 million could be awarded per year.

Thirman’s award will go towards studies that could help move from bench to bedside a drug candidate for treating a devastating form of leukemia.

Acute leukemia is a rapidly advancing cancer of the white blood cells. It is often caused by chromosomal rearrangements in which chromosomes are deleted, duplicated, inverted or translocated. Patients with Mixed Lineage Leukemia (MLL) rearrangements have a particularly poor prognosis. Less than 25 percent survive five years.

Thirman has developed a therapy called TAT-MLL that kills leukemia cells with an MLL rearrangement. He has achieved promising results in cell culture studies showing that TAT-MLL destroys leukemia cells but leaves normal hematopoietic cells intact. His approach targets the mechanism underlying the cause of leukemia, which distinguishes it from many other anti-cancer agents that kill a broader array of cells. This targeted approach should result in fewer and less severe side effects, he says.

“This proposal won an award because it reflects a novel approach, or mechanism-of-action, to a significant need with the potential to deliver a first-in-class drug,” says David Tiemeier, deputy director of UChicagoTech. “It stood out because Dr. Thirman is a leader in the field who presented a nicely conceived, targeted approach with clear go/no-go milestones to guide the next steps toward potential clinical evaluation and commercialization.”

The Innovation Fund award will pay for studies that will determine whether the targeted therapy is stable in vitro and in vivo. If so, further studies will validate whether it is effective in a mouse model of acute leukemia.

“Doctor Thirman’s targeted peptide therapy offers a novel approach that could result in a new drug or teach us more about the target, which could help scientists develop other agents to aim at that target,” says Michael Schlosser, founder and president of Midwest Bioresearch and consultant to UChicagoTech on this project.

Thirman, who specializes in the medical management of adults with leukemia, lymphoma, myelodysplastic syndromes and myeloproliferative disorders, first approached UChicagoTech about two years ago when he realized that his targeted peptide therapy was potentially patentable. After UChicagoTech facilitated the patenting process, it began to help him find potential investors, research collaborators and pharmaceutical companies with which to partner. UChicagoTech encouraged Thirman to apply to the Innovation Fund and helped him prepare his case.

“This award will make a big difference, especially because it provides funding to work with outside companies in addition to collaborators at the University,” Thirman says. “Besides the money, we received invaluable feedback from the panel of outside experts who evaluated our proposal. This is very helpful because I have no prior experience translating research results into business ventures.”

Of course, it takes years for a new treatment to make it to the market, but this next round of feasibility studies should be completed within one and one-half years, Thirman adds. “We’re cautiously enthusiastic that we will continue beyond that stage.”

Innovation Fund awards are intended to help nascent ventures bridge the “valley of death” between basic research and commercialization of a product or idea. UChicagoTech marshals faculty, alumni, potential collaborators, corporate interests and potential investors to assist award winners. Donors to the Fund do not receive financial returns but are given the opportunity to seed potentially groundbreaking innovations.