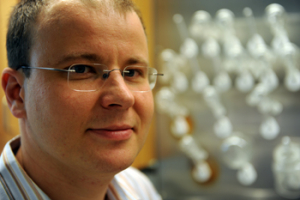 This approach led Talapin—who specializes in the chemistry, physics and materials science of inorganic nanostructures—to shrink the size of the crystals that go into making semiconductors at a time when most other researchers are attempting to increase them.

Semiconductors are used in many things, from cars to computers and watches to solar cells. Most often made of silicon, they are expensive to produce and impossible to make much larger than about a foot in diameter, which limits their ubiquity, particularly their use in solar cells.

But Talapin has turned the tables by making semiconductors out of nanocrystals that are only tens of atoms wide. The key to making this work is a resin-like “electronic glue” that connects the nanocrystals into large semiconductors that transmit electricity efficiently across many nanocrystals.

Making semiconductors out of nanocrystals allows the material to be handled as a liquid and brushed or sprayed onto a surface in the form of paint or ink. In addition, the liquid form makes the semiconductors suitable for the relatively new roll-to-roll technology that creates electronic devices and circuits on rolls of flexible plastic or metal foil. This lowers the high cost of semiconductors and expands their potential application to such materials as clothing and roll-up electronic displays. It also allows for the manufacture of vast photovoltaic cells.

“To address societal needs and to have an impact on the future of solar energy, we need low-cost semiconductors that are flexible and measured in square miles rather than square feet,” Talapin says.

“Professor Talapin is well plugged into the commercial potential of his work,” says Eric Ginsburg, project manager at UChicagoTech. “He knew he had found something that could be patented and commercialized, so he came to us for help with that.”

Talapin describes UCTech as his research consultant, industrial advisor, patent attorney and business partner. “They helped me see the importance of technology transfer,” he says. “My driving force is to be of service to the community.”

Working to make sure that happens are two companies that license Talapin’s electronic glue and nanocrystal technology from the University of Chicago. In 2009, Evident Technologies licensed it for thermoelectrics, which convert heat into electrical energy. In one application, semiconductors could capture and utilize waste heat from an automobile’s motor. In another they could be used in reverse to make a solid-state cooling system that could replace the expensive condenser and environmentally harmful chemicals that are used in refrigerators and air conditioners.

“Our plan is to continue R&D for the next couple of years until we have a viable material that can be used thermoelectrically,” says Clint Ballinger, CEO of Evident. “We already have partnerships with two of the largest thermoelectric companies in the U.S.”

The second company is BlackBox Semiconductor, which Shrink Technologies spun off this year with the help of UCTech. BlackBox has licensed Talapin’s technology for photovoltaic applications, which convert light into electrical energy. Here the killer app would be huge, inexpensive, flexible, mass-produced solar cells. “This will make a dramatic difference in the energy field and could revolutionize solar cells,” Talapin says.

“The electronic glue technology makes solution-based, printed semiconductors a reality,” says David Duncan, BlackBox’s CEO. “These semiconductors will be influential in multiple, large market applications in the electronics and renewable energy industries. In addition to these existing markets, the electronic glue chemistry platform is capable of producing new and potentially revolutionary semiconductor materials that could facilitate significant advancements in clean energy.”

Talapin, who also teaches, now thinks of himself as a part-time, temporary businessman while he continues to research the electronic, mechanical and optical properties and capabilities of his nanocrystals and electronic glue.

“There is no greater reward as a scientist-slash-entrepreneur than to see your technology on the shelves as a product or being used in the world,” Ballinger says.