Building a Platform to Fight Disease 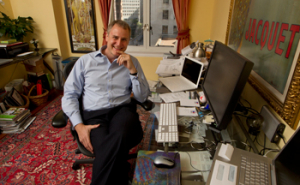 Chances are you’ve never heard of lymphangioleiomyomatosis, a rare lung disease that mostly affects women in their thirties and forties. With this disease, which is also called LAM, patients get strange cysts in their lungs that destroy lung function. Fewer than 5,000 patients are currently diagnosed with LAM.

There is no known cure, but a recent report published in the New England Journal of Medicine in March 2011 showed that the progression of the disease could be temporarily halted with the drug sirolimus. Interestingly, improvements correlated with decreased levels of VEGF-D, a growth factor that stimulates the formation of new lymph vessels.

“The results of this study suggest that LAM patients could benefit from a drug that neutralizes excess VEGF-D,” says Dana Ault-Riché, CEO of Reflexion, a startup that is creating a novel class of drugs, including one for VEGF-D.

This is where UChicagoTech, the University of Chicago’s Office of Technology and Intellectual Property, enters the story. Last year, UChicagoTech invested $30,000 in Reflexion, which prompted $450,000 from additional investors. UChicagoTech recently launched an Innovation Fund to target promising translational research projects that address significant, unmet needs. The awards process is open and competitive. This year, as part of the Innovation Fund’s pilot phase, UChicagoTech awarded Reflexion $75,000.

“These funds are helping Reflexion demonstrate that it can produce a platform of drugs for treating a variety of diseases,” says Alan Thomas, director of UChicagoTech. “We hope this award will lead to millions of dollars in additional funding.”

Reflexion is also using its platform to treat wet age-related macular degeneration. This condition can be treated by drugs that block a related growth factor, VEGF-A.

Current therapies involve frequently injecting drugs directly into the eye but Reflexion’s drug is designed to be dosed as eye drops, which would significantly ease the burden to patients and reduce costs.

“I think within the foreseeable future we should be able to build up a $5 million fund and be giving out grants of $250,000 each,” Given added. “That would create a lot of enthusiasm about the Innovation Fund and stimulate translational research and the commercialization of innovative ideas at the University of Chicago and all around the Midwest.”