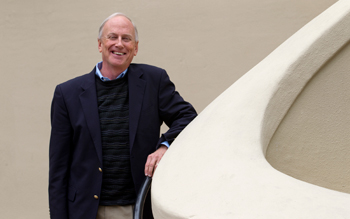 After graduating from the Graduate School of Business (Chicago Booth) in 1969, John Van Dyke returned to his hometown of Sioux City, Iowa, to run a group of banks that his great grandfather started in the 1870s. He got involved in civic affairs, did some angel investing locally and served as mayor from 1984 to 1986.

Lest that turn into “It’s a Wonderful Life,” Van Dyke sold the banks in 1988 and move to San Mateo, Calif., without any idea what he would do.

It turns out that a college friend needed some help with his company that sold reverse osmosis equipment to purify water. Van Dyke was dispatched to Puerto Rico to call on a customer who was not keeping up with his equipment payments.

Rather than collecting the money, Van Dyke suggested that the customer simply pay for the end product: the clean water. With that, a new business plan was born. From then on, the company would own and maintain its equipment and charge customers per gallon of water. Before selling Dakota Water Systems in 2000, Van Dyke built up the business to 45 customers in 20 countries.

“I was in the right place at the right time,” he says, modestly. “Also, networking was key to this story.”

Those two themes — timing and networking — run throughout Van Dyke’s career. “One of the best things about the University of Chicago,” he says, “is the network of connections it provides. I have drawn on that continuously over the years, but as alumni go through life they engage in that network differently. Now that I’m a bit older and have sold my company, I have the time and perspective that allows me to give back more.”

And give back, he does. Van Dyke is a judge of Chicago Booth’s New Venture Challenge, a business-plan competition designed to teach students how to build a business. He’s also a member of the selection committee of UChicagoTech’s new Innovation Fund, a philanthropic for proof-of-concept work around commercially promising University research. Donors to the fund can help give nascent ventures a chance to become commercial in domains that would otherwise be considered “interesting but too early” by the private sector. UChicagoTech is the University’s Office of Technology and Intellectual Property.

As a member of the Innovation Fund’s selection committee, Van Dyke heard a presentation from new venture Electrochaea about its novel energy storage technology based around using stranded electric power to convert carbon dioxide into methane, the principal component of natural gas. Founded in 2010, the company is based on technology developed by Laurens Mets, associate professor of molecular genetics and cell biology at the University of Chicago, and nurtured by UChicagoTech.

Although Electrochaea was not awarded any money in this round, Van Dyke was impressed with the idea and saw many similarities between it and his water purification business.

Since then, Electrochaea recruited Van Dyke to its strategic advisory board. He has played an instrumental role in the company’s new focus on non-U.S.-based opportunities. Also, he has helped connect the company to foreign opportunities and to potential investors and strategic partners.

“John brings a breadth of market experience and entrepreneurial success that’s extremely rare,” Hein says. “The real world, on-the-ground experience that he brings to the table is invaluable.”

From 1996 to 2002, Van Dyke was a member of the Band of Angels, a longtime group of angel investors based in Silicon Valley. He has invested in more than 80 startups and now works as a consultant at SRI International and other companies.

His advice for University of Chicago alumni? “Stay in touch. Pick up the phone. Get involved.”