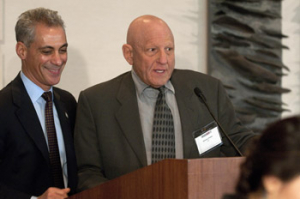 The energy was palpable: Solar, wind and battery. Ideas, vigor and power.

Appearances by Illinois Governor Pat Quinn and Chicago Mayor-elect Rahm Emanuel attested to the high-powered level of the dynamic meeting, which handed out $140,000 in cash prizes to four promising new companies. And several spanking-new Chevy Volts — powered by batteries developed at Argonne National Laboratory — that were available for test-driving outside the meeting at Chicago Booth’s Gleacher Center added a certain cachet.

The emerging role of Chicago and the Midwest as a center for clean energy technologies and energy conservation was a recurring theme throughout the meeting.

“We may be a bit behind other areas of the country in biotechnology, but when it comes to green energy technologies, we’re ahead of everyone else,” said Michael Polsky, CEO of Invenergy. “The United States is witnessing a profound change in the way it produces and uses energy, and this is creating great business opportunities for entrepreneurs. We’re at the right place in the right time with the right tools in this revolution.”

“We’ve even got plenty of wind, this being the Windy City,” he quipped. “Together we’ll make Chicago the center-of-gravity for clean energy.”

Indeed, many presenters spoke about local preeminence in green technologies. “We have Silicon Valley investors who want to invest more than $10 million in our Chicago-based company,” said Richard Earley, executive chairman of Clean Urban Energy. “That demonstrates that the Midwest can attract money from the Coasts for green tech.”

Clean Urban Energy took home a check for $75,000 as the top winner of the new Clean Energy Challenge business plan competition for its online technology that integrates commercial heating/ventilating/air condition operations with the electric grid and energy markets. “In effect, we turn buildings into rechargeable batteries by figuring out what is the best time and way to heat and cool buildings,” Earley said.

The Clean Air Challenge was designed to highlight transformative business ideas from Illinois entrepreneurs working with alternative energy and clean technologies to help new and emerging business ventures move to their next stage of development. It was sponsored by the U.S. Department of Energy ($100,000); Google, Acciona and others ($30,000); and Invenergy ($10,000), the latter of which was announced the day of the meeting by an energized Polsky.

Modeled on the Chicago Booth New Venture Challenge, the competition attracted more than 70 entrants: the top 17 were invited to present to a panel of expert judges. The winners were announced at the end of the daylong forum. In addition to Clean Urban Energy, the other winners were:

“The contest was such a success that we plan to hold it every year,” said Amy Francetic, executive director of the Clean Energy Trust, which was formed to accelerate the development of Midwest clean energy businesses by connecting entrepreneurs, researchers and early stage companies with the expertise and capital needed to become sustainable.