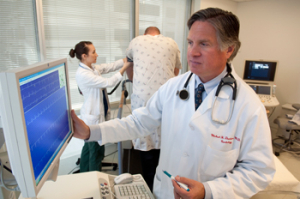 Some Chicago-based researchers with a commercial success or two under their belt head for the East or West Coasts, which are known for nurturing translational research. Michael Davidson, MD, however, has chosen to stay in Chicago.

“Chicago could be in the same league as Boston, San Francisco or San Diego,” says Davidson, director of preventive cardiology, and clinical professor of medicine at the University of Chicago Pritzker School of Medicine and executive medical director of Radiant Research in Chicago. “We’ve got five medical schools, two pharmaceutical giants and great potential here.”

“The University of Chicago, in particular, is a place where you can collaborate with researchers, build value, and develop commercial products and services that will benefit patients,” he adds.

This is what led Davidson to the University as an adjunct faculty member in 2007. He arrived with years of experience as a clinician, researcher and entrepreneur. In 1987, Davidson founded the Chicago Center for Clinical Research, currently part of Radiant, which conducts clinical trials for many large pharmaceutical companies and is a recognized authority on clinical studies for drug development. Davidson has conducted over 700 clinical trials.

“Dr. Davidson is square at the interface of drug discovery and subsequent development,” says Adam Conway, project manager at UChicagoTech, the University of Chicago’s Office of Technology and Intellectual Property.

“I feel like I’ve been an entrepreneur all my life,” Davidson says.

SonoGene is developing a novel therapeutic product to reduce fatty cholesterol deposits (plaques) in arteries by increasing the body’s production of HDL cholesterol, thus reversing the process underlying the development of cardiovascular disease and atherosclerosis. Omthera Pharmaceuticals is conducting Phase III clinical trails on an Omega 3 fatty acid compound designed to provide superior blood levels of Omega 3s in patients with both low- and high-fat diets.

In collaboration with others at the University, Davidson has developed a promising initial result for a combination therapy that may help lower cholesterol levels, according to Conway. The discovery came as quite a surprise, Davidson says.

Reverse cholesterol transport (RCT) is a multi-step process through which the body regulates the movement and management of LDL (bad cholesterol) utilizing HDL (good cholesterol), the liver, bile, several enzymes and other factors. RCT can actually reduce the plaque buildup in arteries and thereby lower the risk of cardiovascular disease and atherosclerosis.

Davidson set out to find a good way to make HDL more effective in this process. Using a two-pronged approach, he blocked a gene that regulates how much LDL is transported to the intestines, then introduced a bio-acid binding drug so that more LDL would be defecated.

“Expecting this to double the reduction of LDL, we were extremely surprised to find a 60-fold increase in the amount of LDL that was eliminated in the stool,” Davidson says.

That’s when he took his findings to UChicagoTech. “They helped us frame the best way to protect our intellectual property and our potential patents,” Davidson says.

UChicagoTech and Davidson are trying to build the idea into a company and/or attract a pharmaceutical company as a partner in developing this novel therapy.

“Dr. Davidson is very interested in partnerships between academic researchers and commercial endeavors,” Conway says. “He’s a great example of the academic entrepreneurialism that is found across campus.”

“Any time a faculty member discovers something, he should think about how the discovery could lead to a product or services,” Davidson says. “UChicagoTech can help you along that path.”