Kent and Cohn Projects Funded in Pilot Innovation Fund Round 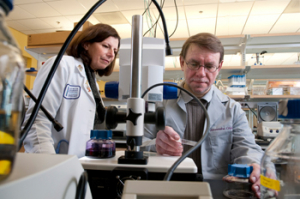 The University of Chicago’s Office of Technology and Intellectual Property’s (UChicagoTech) new Innovation Fund reached an important milestone at the end of 2010 with the successful completion of a pilot process that awarded $100,000 to two early-stage translational projects aimed at developing products around University research. Professors Stephen Kent and Susan Cohn both received grants aimed at developing pharmaceuticals. Additional key outcomes of the pilot were refining project selection criteria and building an external selection committee.

Research projects at the University with the potential for commercial impact frequently fall into the proverbial “valley of death”, that is, they are too applied for basic research funding but too early-stage to attract corporate funds or venture capital, explains David Tiemeier, deputy director of UChicagoTech. “With this fund we’ll be underwriting the achievement of milestones that move projects along a commercial trajectory so they have a better chance of attracting money from other sources.”

The pilot phase is being supported solely by University funds. The next stage is to expand the fund through philanthropic support from donors interested in helping the University as it expands translational capability around its world-class research. The ultimate goal is to create a program that can sustainably bridge a wide variety of research-based concepts with commercial potential to follow-on funding through an open and competitive process.

“The fund is a good way for the University to jump-start a culture of entrepreneurism so that good research ideas can have a chance to be translated into useful products and services,” says alumnus Martin Sanders, MD ’79. “Of course, there will ultimately be a commercial incentive in this work, but there’s also an intellectual drive and a humanitarian motivation to help people.”

Sanders is one of four outside experts who currently serve on the selection committee that advises the University on which projects to fund. These experts have extensive experience in the worlds of translational research, intellectual property, business development and finance. Sanders, for instance, is well versed in the FDA’s approval process, having worked on more than 75 drugs, 10 of which have been approved and four of which have more than $1 billion in annual sales each.

Another member of the selection committee is Scott Meadow, clinical professor of entrepreneurship at Chicago Booth. “This bold initiative could be a game-changer because it involves the entire University, including scientists, the medical, business and law schools, and alumni,” he says. “It represents a terrific opportunity not only to advance science and develop commercial potential but also to enhance fund-raising and faculty recruitment while engaging University alumni.”

Beyond the pilot phase, the Innovation Fund will target promising translational research projects addressing significant, unmet needs with unique approaches. Future Innovation Fund projects will include those that, if they succeed in reaching their technical milestones, will precipitate funding from outside sources to continue the development work.

The project from Stephen Kent’s group in the Department of Chemistry, a powerful platform for creating new pharmaceuticals from small, chemically synthesized D-amino acid peptides, is already the basis for a new company, Reflexion Pharmaceuticals. The company intends to develop novel anti-angiogenesis therapies, which is an area of unmet need and opportunity, but has encountered a consistent response of “promising but too early” from the investment community. The Innovation Fund award ($75,000) has catalyzed matches from several other sources collectively enabling Reflexion to perform technical proof-of-concept on their platform. If successful, this will lead to external investments to support further development.

At the same time, Susan Cohn, MD, a Professor of Pediatrics at the University, received $25,000 to advance research being conducted on a drug candidate that has shown efficacy in treating human neuroblastoma in a mouse model. Although neuroblastoma is frequently a deadly cancer, it is uncommon and therefore considered an orphan disease, making it difficult to attract investment for therapies aimed only at the disease.

“The Innovation Fund has provided enough money for us to conduct the next set of mouse studies to see if our peptide is effective against another, more common adult cancer in a mouse model,” Cohn says. “If so, we might be able to attract money to continue this development work.”

Until recently, the National Institutes of Health supported Professor Cohn’s basic research into the neurobiology of neuroblastoma. Once the researchers identified a drug candidate and began exploring its broader use in the treatment of cancer, however, traditional NIH funding was more difficult to obtain. At the same time, the absence of data in other tumor models made attracting commercial partners practically impossible.

“We hope the results of the work supported by the Innovation Fund will qualify the project for specialized translational funding available from the National Cancer Institute or attract the interest of a commercial partner,” says Alan Thomas, director of UChicagoTech. “This is how the Innovation Fund will work: giving pre-commercial medical and non-medical projects a chance by reducing risk, providing external validation, and targeting sources of the next dollar.”

“We had hit a wall and did not know what to do,” Cohn says. “We’re grateful to be able to proceed with our research and hope to see our drug candidate in clinical trials down the road.”