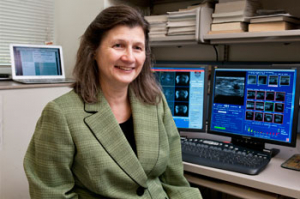 Approximately 70% of screening mammograms in the U.S. are subjected to a second read by a computer-aided detection system (CADe), a technology for assisting in the detection of cancerous lesions that was developed by scientists at the University of Chicago and commercialized with the help of UChicagoTech, the University’s Office of Technology and Intellectual Property.

As this technology progresses, experts predict the next stage — computer aided diagnosis (CADx) and quantitative image analysis — will assist in diagnosing and characterizing cancer, assessing risk, estimating prognosis and evaluating responses to therapy.

“Detecting breast cancer with CADe is like ‘Where’s Waldo’ — you know what Waldo looks like, but you may not immediately see him in the picture,” says Maryellen Giger, PhD, professor of radiology at the University. “As a second reader, CADe indicates the location of a potential cancer, leaving the final decision to the radiologist.”

CADx and quantitative image analysis, however, go further, Giger explains. The field is rapidly expanding due to society’s acceptance of computer assistance in other aspects of life, the continuing increase in computing power and storage, the interdisciplinary components of this field, and the cross-fertilization of medical, physical, mathematical and computer sciences.

This is allowing Giger and her colleagues to apply technologies developed for detecting breast and lung cancer to detecting and diagnosing colon and prostate cancer and cardiovascular disease. Virtual biopsies will also be possible, she says. Some of these advances have been developed, published and patented, again, with the help of UChicagoTech.

“We have a lot of irons in the fire,” Giger admits.

Giger is anxious to see her research results commercialized. “I used to think that, as an academician, I did not have to consider patenting the results of my research, but rather would give them away freely,” she says. “Now I realize that if you just publish and give away your intellectual property, it is unlikely that anyone will develop it into a useful product because a company would not have a financial incentive to do so. Now I realize that if you license it to one or a few companies, they will turn it into a clinical product that can benefit patients.”

That’s what happened with CADe, which Giger and her colleagues Kunio Doi and Heang-Ping Chan pioneered. In the 1990s, the University licensed the technology to R2 Technology, which launched ImageChecker, the first CADe for screening mammograms to gain Food and Drug Administration approval. Subsequently, Hologic purchased R2 Technology.

Giger is confident the same will happen with other developments from her lab and other labs in the Department of Radiology and the Committee on Medical Physics. QuantX, a platform technology created at the University for characterizing and diagnosing cancer from multi-modality images, is the centerpiece of a new company, Quantitative Insights. The company was a 2010 finalist in the University’s New Venture Challenge, run by the Booth School of Business and its Polsky Center for Entrepreneurship. This year’s competition began with 111 teams.

“During the competition a company called about licensing, and now UChicagoTech is gauging their interest,” Giger says. “That’s appreciated, because, as researchers, we depend on UChicagoTech’s expertise on technology transfer and commercialization, which complements our expertise in science and technology.”