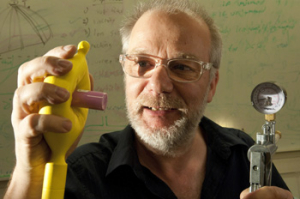 “Fundamental research is what keeps me up late at night,” says Heinrich Jaeger, PhD, the William J. Friedman and Alicia Townsend Professor of Physics at the University of Chicago.

One of those late nights might have been fueled or inspired by a bag of vacuum-packed coffee grounds, which is solid until you cut off a corner, at which time the coffee grounds become fluid-like. Granular materials that readily transition between fluid and solid states are the basis for the new universal gripper technology that Jaeger and his colleagues recently invented. Now, with the help of UChicagoTech, the University of Chicago’s Office of Technology and Intellectual Property, they are developing the technology for licensing.

“We came at this from a completely different perspective, looking for a way to short circuit this inherent complexity,” Jaeger says, referring to him and his colleagues, Hod Lipson, PhD, Associate Professor of Mechanical & Aerospace Engineering at Cornell University, and Eric Brown, PhD, Postdoctoral Associate in Physics at the University of Chicago. “We wanted a low-cost, adaptable solution, something that would have the gripper material, itself, make decisions.”

Their idea was to design a bag-like gripper that, like that bag of coffee grounds, can readily transition between fluid and rigid states. This allows the gripper to conform to the shape of the object to be lifted and then to be made rigid in order to lift and hold that object.

Last year Jaeger disclosed their invention to UChicagoTech, which applied for a patent on the technology and is now developing a commercialization strategy.

“This is a simple, elegant solution to a major problem in robotics,” says Sean Sheridan PhD, Project Manager at UChicagoTech. “As robots become more common, this technology will have many potential applications in industry, medicine, and the military.”

What Jaeger finds most satisfying about this project is having started from a basic physics idea (in this case the paradigm of a jamming transition), extended it in a new direction that has real-world applications, and finally translated it into a working prototype. His next goal is to see the universal gripper technology adopted as an alternative or supplement to the hand-based model for robotic grippers.

“We’re far from being done with the basic research, so it’s nice to be able to hand off the business and commercial aspects to UChicagoTech,” he says. “That lets us keep our focus on the fundamental aspects.”