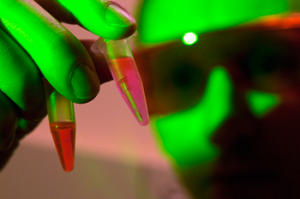 Imagine you know nothing about basketball and have to figure out how the game works based on a few random snapshots. Depending on the snapshots you happen to have, it could appear that the game is slow, that all the action takes place on one end of the court, or that the team in black and white stripes always has the ball.

This is similar to what cell biologists used to face trying to understand dynamic cell functions based on static images. Fluorescent proteins have changed that by allowing researchers to tag and trace precise biological mechanisms in real time at a microscopic level and thereby construct a more accurate overview of how cells work.

“Fluorescent proteins have revolutionized biomedical research over the past 15 years because they enable specific cells and intracellular structures to be visualized in living organisms,” says Benjamin Glick, PhD, Professor, Molecular Genetics & Cell Biology, University of Chicago. “This created a new mindset: Rather than basing knowledge on static images, we now understand that cells and intracellular structures move around and interact constantly — and with a previously unimaginable complexity.”

Glick heads up a team of researchers who together with a group led by Robert Keenan, PhD, Assistant Professor, Biochemistry & Molecular Biology, University of Chicago, have engineered red fluorescent proteins to better meet the needs of researchers at the University and around the world. “When we have an interesting development, we call Clontech and UChicagoTech,” he says. “They do the heavy lifting in terms of licenses and patents so we can stick to the science.”

“UChicagoTech has done an outstanding job,” he adds.

UChicagoTech is the University’s Office of Technology and Intellectual Property, and Clontech Laboratories, which develops, produces and markets biological products in life sciences, owns the patents for the precursor to the red fluorescent proteins that Glick and colleagues engineered.

Derived from jellyfish, green fluorescent protein (GFP) was the first fluorescent protein used to trace biological functions in vitro and in vivo. It has been introduced and expressed in many bacteria, yeast, fish, plant and mammalian cells, including human. The importance of GFP is underscored by the fact that the 2008 Nobel Prize for chemistry was shared by three individuals responsible for its discovery and development.

A red fluorescent protein derived from reef corals entered the scene in the late 1990s. DsRed complements GFP, in part because its fluorescence signal has better tissue penetration. Clontech patented DsRed and has made it available to the research community ever since.

Many researchers attempted to improve the “wild-type” DsRed protein because it takes more than 24 hours to mature and tends to kill the cells upon which it is put to work. Alas, the results were not entirely satisfactory until Glick and his colleagues used directed evolution to create DsRed-Express2, a fast-maturing, long-lasting protein that is non-toxic to cells.

Today, DsRed, its variants and other fluorescent proteins play an important role in a variety of research areas. They can be used to trace gene expression, analyze brain circuitry, sort cells or observe a virus. In transgenic mouse models of disease, they can be used to track insulin-producing cells in the pancreas or metastatic cancer cells as they travel through the body.

DsRed-Express2 is licensed by the University to Clontech in what Glick describes as a “mutually beneficial relationship”. Clontech’s sales generate royalties for the University and the researchers, which fund more research, including work on a new version of DsRed tailored for binding to enzymes and other proteins.

“We’re engineering a ‘well-behaved’ reporter protein that will tag along on the target protein like a little Teflon ball without perturbing any of the biological functions that normally occur within the cell,” Glick says. “That will help researchers figure out what’s going on – the rules of the game – in a given cell.”