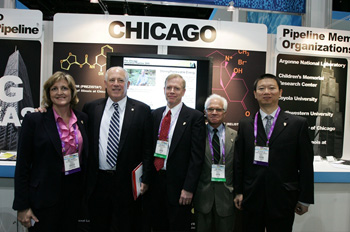 Illinois Governor Pat Quinn visits the Chicago Innovation Pipeline booth at the 2010 BIO Convention held at McCormick Place. The pipeline, developed by UChicagoTech, is a collection of technologies available for licensing from 6 of the top research institutions in the Chicago region. Left to right: Nina Paciotti, Governor Quinn, Tim Honaker, Jim Zitnick, and Yue Wu.

Solutions to some of the world’s largest problems may have already been unlocked on the benches of laboratories. Treatments for incurable disease, clean energy alternatives, the means of improving national defense and feeding hungry populations—all these dreams may have their roots in the incubators and centrifuges or research centers. But transferring those scientific innovations to the broader world is not easy, as indicated by the gloomy name given to the task: the “valley of death.”

At the 2010 BIO International Convention, the world’s largest biotechnology gathering, more than 15,000 attendees discussed how best to construct bridges across that yawning valley. While the worldwide economic troubles of the last few years have shaken the biotechnology industry like many others, conference-goers were optimistic that it may also have created an improved landscape for public-private partnerships.

“There’s a bunch of forces driving everybody to be much more collaborative. Everybody’s got a piece of everybody else’s puzzle,” said Alan Thomas, director of UChicago Tech. “There’s much more of an open innovation environment now, so speaking each other’s language becomes much more important.”

In an attempt to make that process run more smoothly, Thomas’ office joined with several area partners to debut the Chicago Innovation Pipeline during the conference. A collaboration with Argonne National Laboratory, Children’s Memorial Research Center, Loyola University, Northwestern University and University of Illinois at Chicago, the pipeline serves as a database of research discoveries with commercialization potential. Private biotechnology companies can browse the database as if they were viewing songs in an iTunes library, Thomas said, quickly finding drugs and devices ripe for development.

The unveiling of The Chicago Innovation Pipeline at the State of Illinois’ kiosk on the convention’s exhibit floor drew considerable interest, including visits from Chicago Mayor Richard M. Daley and Illinois Governor Patrick Quinn. Its potential for forming productive partnerships was also emphasized by Doug Given, investment partner at Bay City Capital and University of Chicago provost Thomas Rosenbaum at a gathering of roughly 100 alumni at the Adler Planetarium on the first night of the conference.

“You’ve got the power of the way the University of Chicago thinks and acts in science,” Given told the alumni in attendance. “One of the great untapped opportunities is taking that and creating external relationships that take advantage.”

“I’ve seen an extraordinary emergence in interest in biology, particularly in terms of translational medicine, the connections between discovery and application and the need to disseminate knowledge through invention, not simply through discovery and scientific publication,” Rosenbaum agreed. “That has been a wonderful thing to see.”

Research at the University of Chicago was presented at several panels and sessions throughout the four-day conference. The Translational Research Forum, held on the first day and co-sponsored by the University, featured another local collaboration: the Institute for Translational Medicine directed by Julian Solway. Solway discussed how the program—which also includes Argonne, the Illinois Institute of Technology and the Northshore University HealthSystem—can provide an infrastructure for conducting faster and more efficient clinical trials, as well as address the health needs of the community surrounding the University of Chicago campus.

“The health status of the residents in the University of Chicago’s primary service area of some one million people is really very poor, as reflected in extraordinarily high rates of complex diseases and infant mortality,” said Solway, the Walter L. Palmer Distinguished Service Professor of Medicine and Pediatrics. “It’s in this context that we seek to improve health by translating research discoveries into real and effective therapies.“

At the core of each piece of biotechnology is basic science, research that may not have an immediate application but may pay off in the future in unforeseen ways. Stephen Kent, Professor of Chemistry at the University of Chicago, reminded the government officials and industry representatives at the forum of the importance of funding such research and not just focusing on applied science.

“We spend almost 15 percent of our gross domestic product on health care…about $2 trillion,” Kent said. “I don’t think [the NIH budget of] $32 billion is a very large number in that context. We’re under-investing all over the place.”

Yet with promises of renewed government investment in science and a sunnier forecast for the world economy, BIO participants were largely optimistic about the future of the biotechnology industry. Amid the conference rooms of McCormick Place and the museums, hotels and restaurants of Chicago, those high spirits may have paved the way for new relationships, blueprints for bridges to bring scientific discovery from the laboratory to the wider world.