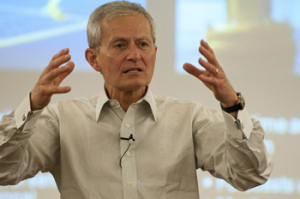 Technology, invention, creativity and discovery. These forces are not enough to launch a successful product or service, create a company, or change the world. The key ingredient is innovation, the novel solution to a problem. The closer you are to the problem, the better you will be able to craft and monetize an innovative solution.

So said Nick Donofrio, former executive vice president of innovation and technology at IBM, April 15, 2010, at the ARCH Venture Partners Innovation Workshop cosponsored by The Polsky Center for Entrepreneurship and UChicagoTech, the University of Chicago’s Office of Technology and Intellectual Property.

Donofrio worked at IBM 44 years, leading technology and innovation for more than a decade. When he started in 1964, IBM had $5 billion in revenue. Donofrio helped lead IBM through its “near death” experience in the early nineties as a manufacturing “dinosaur” into an innovation giant, one of the biggest turnarounds in business history. Revenues grew to $100 billion by 2008, a year in which IBM received 4,900 U.S. patents–more than any other American company.

Donofrio gave two examples of innovations that illustrate how existing technology, coupled with creative thinking boosted by a few inventions can add up to a creative solution to a problem. IBM helped the city of Stockholm introduce one of the world’s first traffic congestion charging systems, reducing traffic by 20%, emissions by 40%, and encouraging 40,000 more transit users, all within 1 month of implementation. “The system is now being implemented in several other cities,” he said.

Meanwhile, IBM is helping the state of New York monitor and forecast in real time the health of the Hudson River by installing an integrated network of more than 10,000 sensors that monitor water quality and temperature, all tied into a fundamentally new computer architecture. The project will look at the effects of global warming, the movements of migrating fish, and the transport of pollutants, with significant implications for new research and decision-making.

Neither project involved much invention, Donofrio said. “For the most part, we used existing technology to generate meaningful information that could be acted upon immediately. There are a lot of such innovative opportunities hiding right in front of you.”

Another example of successful innovation involved a software company that uses social networking and multiplayer game technology to link 50 employees with 250,000 “associates” who come to the website looking for programming work, Donofrio said. “The company makes everything a game, and has made millions of dollars from its website.”

“Given our global interconnectedness and the advances of social media, it’s possible to harness the creativity of colleagues and customers, employees and vendors, if you’re willing to make the effort,” Rudnick said.

“At the University of Chicago, we believe that building multidisciplinary teams is important to commercializing technology,” she added. “Donofrio forecasted that the major innovations of the 21st century will be service based, and that people who are multidimensional and can build cross-disciplinary teams will be the most successful.”