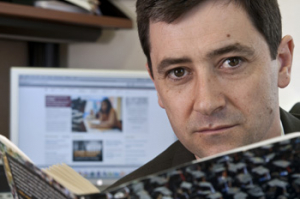 Last October, top-ranking representatives from McGraw-Hill spent a day on campus meeting with the authors, researchers and administrators responsible for creating some of the best, most widely used preK-12 math curricula in the country. They liked what they saw.

Set up by UChicagoTech, the University of Chicago’s Office of Technology and Intellectual Property, the meetings built on the strong relationship between McGraw-Hill and the University that UChicagoTech helped to develop and nurture over the years.

“UChicagoTech was a terrific catalyst,” says Timothy Knowles, PhD, John Dewey Director, Urban Education Institute. “They recognized that the University offers a unique combination of expertise: We train teachers, operate schools, undertake world-class research and have a history of remarkable curriculum development. This powerful engine can be used to generate commercial tools and products that would generate revenue for the University, help sustain R&D; and improve education nationwide.”

One immediate outcome of the meetings is discussions with McGraw-Hill to publish UEI programs, including Strategic Teaching and Evaluation of Progress, a developmental literacy assessment for K-3, and 6to16, a college readiness curriculum and social networking tool intended to increase the number of urban students getting into and finishing college. UEI conducts research, trains teachers and leaders for urban schools, creates tools to improve outcomes and operates charter schools.

Already well engaged with the University, McGraw-Hill publishes two extremely successful math curricula developed by the University and currently under the umbrella of the University of Chicago School Math Project, which was founded in 1983 to develop secondary math curricula. One is Everyday Math, a preK-6 curriculum first published in 1988 by the Everyday Learning Corp., which was created with the help of UChicagoTech’s predecessor. The other is a 6-12 curriculum developed by UCSMP.

The two curricula have generated more than $40 million in non-author revenues for the University.

Everyday Math is the University’s most successful venture capital enterprise, currently generating about $4.5 million in annual royalties. Used in 185,000 classrooms by 4 million students, it is the nation’s most popular elementary math program.

For the past couple of years, both curricula have been published for the first time by the same company, McGraw-Hill. And both curricula are heading into their fourth edition.

“This is unprecedented in the publishing world, where no series of K-12 project-written mathematics texts has ever gone into even a second edition,” says Zalman Usiskin, PhD, Director, UCMSP. “This is a testament to the value of the two curricula.”

What makes these two curricula so successful is that they are based on rigorous research and tested in real classrooms, says Timothy Honaker of UChicagoTech. “UEI, UCSMP and others develop, evaluate and improve curricula, while we manage the business relationship with McGraw-Hill.”

“As authors and researchers, we spend lot of time with our heads down, working on tools to improve teaching and learning,” Knowles says. “As such, we spend little or no time thinking about the commercial sector. UChicagoTech is well placed to push our chins up so we can see the broader picture and wider potential.”