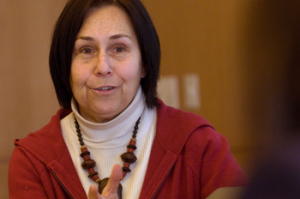 Eileen Dolan, PhD, Professor of Medicine and Chair of Committee on Clinical Pharmacology and Pharmacogenomics at the University of Chicago, says she learned a lot at the Translation Event covering biomarkers held February 11-12.

Organized by UChicagoTech, the University of Chicago’s Office of Technology and Intellectual Property, Translation Events bring a panel of industry experts to campus to advise faculty members about how to translate their research findings into innovative products and services.

“I gained insights into the importance of drug-label warnings about potential pharmacogenetic effects,” says Dolan, who presented research on using genetic markers to predict ovarian cancer response to chemotherapy. “Also, I learned that strategically it is best to determine the pharmacogenetic markers before a drug is launched so the markers go hand-in-hand with drug development.”

Carole Ober, PhD, Blum-Riese Professor of Human Genetics, Obstetrics and Gynecology, and the Committee on Genetics, Genomics, and Systems Biology at the University of Chicago, also found her biomarkers session helpful. “It was interesting to hear what people with more of a business angle think about my research,” she says.

Previous Translation Events have focused on medicinal chemistry and biologics; future sessions will cover such topics as diagnostics, medical devices and information technology.

Attorney Dennis Bennett, founder and partner at Global Patent Group, a patent law practice directed at pharmaceutical and life-science patent issues, found the sessions similar to what occurs in industry. “It’s a reality check, to make sure everything’s on track,” he says.

“Being on campus,” he adds, “reminds me of what faculty want: intellectual freedom, opportunities to publish and the ability to go where the research takes them. Of course, that’s in addition to the goals that industry and academia share: to further medicine and help others, while making some money along the way.”

“I would have benefited from this kind of session while I was conducting academic research,” says Edward Ogunro, PhD, another industry expert. “I think more of my work in cardiac biochemistry would have been translated into commercial endeavors.”

A scientist by training, Ogunro worked at Abbott Laboratories for 22 years before leaving as senior vice president of Hospira. He now consults and serves on various boards.

Emily Levy also has many years of experience evaluating and commercializing new technologies. She is co-founder of Synergy Partners, a consulting network for biotechnology and pharmaceutical companies, venture capitalists and universities. During the sessions she advised scientists to think like the Food and Drug Administration.

“Conduct research and design trials that move your discovery along the regulatory pathway,” she says. “And seek advice not only from those with market experience in the product you’re developing but also in the ‘next’ product over. In other words, if you’re developing a drug, what’s going on with devices that might affect the market for that drug?”

“I hope each faculty member walked out of their session with at least one idea they wouldn’t have thought of otherwise,” she says.

That was true for Dolan, who says she would participate in a Translation Event again and “highly recommends“ the opportunity to other faculty. “Too often we’re absorbed in our research, but this allowed me to see how my findings fit best in the drug discovery and development process.”