Eye for Opportunity, Appetite for Collaboration 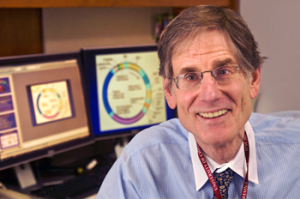 Few, if any, University of Chicago faculty members have as many patents, products and promising commercial endeavors in various stages of development as does Ralph Weichselbaum, MD. The D.K. Ludwig Professor and Chairman of the Department of Radiation and Cellular Oncology at the University of Chicago has been working with UChicagoTech (and its predecessors) for almost 20 years.

“Two of the most impressive things about Ralph—in terms of interaction with our office—are his eye for a commercial opportunity and his appetite for collaboration within the University of Chicago and with other institutions,” says Benjamin Dibling, PhD, Program Manager, Oncology at UChicagoTech, the University’s Office of Technology and Intellectual Property. “Ralph is a frequent discloser to our office, which has led to the generation of a sizeable patent portfolio.”

Weichselbaum’s widely varied collaborations are too numerous to list in their entirety, but here are some of his current projects, most of which represent collaborations with other physicians and researchers:

Even though Weichselbaum may make technology transfer look easy, he is quick to say that the process is extremely complicated and no sure thing. “It takes a lot of time…and a lot of shoe leather,” he says, enumerating a few of the aspects that are involved in technology transfer, from identifying intellectual property to filing patents to finding capital to licensing a product to launching a start-up company.

“Of course, UChicagoTech, which really has the best interests of faculty in mind, can help with all of this, but to be successful you have to immerse yourself in the field, read all the associated papers, get to know the market niche, and be prepared to help sell the idea,” he says.

“Typically, faculty members are not likely to be able to identify a good commercial prospect, a good transfer agent, a good funding source, or a good business deal,” Weichselbaum says. “That’s why UChicagoTech is there, to help faculty find potential prospects and suitable partners, and to help develop ideas into successful products and services.”