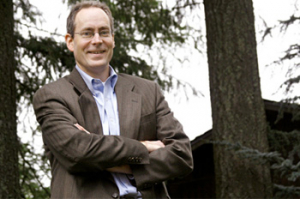 Cory Gerdts, PhD, is glad he was a part of Rustem Ismagilov’s lab in 2003, although sometimes he had to spend extra time thinking about one of his professor’s requirements.

Rustem Ismagilov, PhD, Professor of Chemistry at the University of Chicago, required his students to come up with a new idea every week. It didn’t have to be earth shattering. It didn’t even have to be about their lab work. But it had to be new.

Ismagilov is an expert in microfluidics—how tiny amounts of liquid flow and interact in a microchannel. At that time, he was already renowned for developing a process that creates microscopic “plugs” of fluid that can be paraded (separated by oil) through tiny tubes or in channels on plastic chips. The precise, self-contained plugs can be used to study how chemicals interact and molecules bind.

One of Gerdts’ new ideas was to generate pre-formed drops in a tube attached to a syringe in order to combine different chemicals into the plugs in various concentrations. (It lead to a published paper; see “The plug-based nanovolume Microcapillary Protein Crystallization System (MPCS),” Gerdts et al, Acta Crystallogr D Biol Crystallogr, Nov., 2008; 64 (Pt 11.)

“After reading the journal article by Ismagilov, Gerdts and others about this technique, we contacted the authors because their idea fit perfectly with something we do—crystallize proteins for basic research and drug discovery,” says Lance Stewart, PhD, MBA, CEO of Emerald BioSystems and Emerald BioStructures.

Emerald BioStructures licensed the invention from UChicagoTech, the University’s Office of Technology and Intellectual Property, and won a National Institutes of Health grant for Protein Structure Initiative research to develop the technology, which has become very successful, Stewart says. “For example, using this technology we have solved numerous high resolution protein crystal structures of a variety of infectious disease drug targets, with the potential to be important platforms for the development of new antibiotics.”

Researchers crystallize proteins because X-rays diffracted by the crystals can be used to reveal their precise chemical structure, down to the atomic level. This is how researchers create the pictures of molecules found in textbooks and journals such as this one, representing a compound Emerald BioStructures has worked on to identify drug molecules that could ultimately treat asthma or heart attacks. Such pictures are not only pretty; they accurately depict the interaction of putative drug molecules with their pharmacological target protein and suggest ways to further optimize lead drug molecules.

Proteins are big, complex molecules, so it’s hard to crystallize them. Using traditional methods, researchers combine purified proteins in solution with cocktails of reagents they hope will force the proteins to crystallize. It’s hit or miss.

The new technology developed at the University of Chicago, however, utilizes less protein sample and accelerates experimentation. The plug maker instrument delivers reagents to a small plastic chip where they are mixed and form microscopic plugs, each with its own unique composition. These chips can hold as many as 800 plugs, covering the gamut of possible protein crystallization compositions. This process can be far cheaper than traditional crystallization methods because it uses as little as one-fiftieth of expensive-to-produce protein per chip experiment.

Emerald BioStructures, which crystallizes proteins for clients, among other services, is a sister company of Emerald BioSystems, which develops and offers the software-controlled instrumentation and associated consumables used with this technology.

“Only a tiny fraction of people know about protein crystallization, even though it affects almost everyone,” Gerdts says. “Meanwhile, there’s a lot more research at the University of Chicago that could be turned into other products and services to improve people’s lives—just like we did through Emerald and UChicagoTech.”