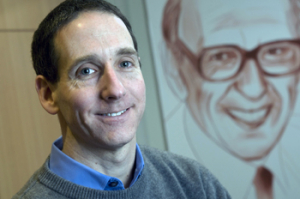 Charles Polsky’s transition from medicine to finance reflects an unconventional path, but one that makes him particularly well suited to act as a resource to the University of Chicago’s promising inventors and fledgling entrepreneurs—as well as UChicagoTech, the University’s Office of Technology and Intellectual Property.

In high school, Polsky had a bone tumor. The physician who removed it took a liking to his young patient and offered him a job as a research assistant. Over several years, Polsky conducted medical research during his summer breaks away from school.

After receiving a bachelor’s degree in mathematics from Yale, Polsky taught high school math for a year before taking a job as an investment analyst at William Harris Investors, a long-standing family office in Chicago. He enjoyed the work but remained interested in medicine. He completed his premed requirements and was accepted at the Pritzker School of Medicine.

Polsky graduated from Pritzker in 1996 and stayed on at the University of Chicago Hospitals to complete a residency in General Medicine. Although he passed the General Medicine boards, Polsky returned to WHI to help manage the transition to retirement of Irving Harris, his grandfather and founder of the office.

Integration of medicine and finances

Integrating his medical and financial training, Polsky developed the firm’s biotechnology investment platform and continues to manage this branch of the business. His wife, Isabel Navarrete Polsky, who also graduated from Pritzker in 1996, currently oversees domestic responsibilities with the couple’s four children.

With his background in medicine, Polsky can understand the science behind many potential products and fledgling companies that he analyzes for WHI. That background helps, too, when he consults for UChicagoTech.

“I advise them on drug development strategies, what medical products will fly in the marketplace, what questions or objections potential investors might raise, and other issues,” he says. “We have a mutually beneficial open line of communication.”

Alan Thomas, Director of UChicagoTech, agrees. “Charlie has great expertise in biotechnology, from publicly traded companies to early-stage venture deals,” he says. “He has consulted on several projects here and has a good network in the investment community.”

“In addition to consulting,” Polsky says, “I hope that something will come out of UChicagoTech in which I’ll have the interest and ability to invest.”

Although 2009 was a rough year for investors and budding entrepreneurs in biotechnology, now is a great time, Polsky says. The market has been re-evaluated, and only strong players and promising ideas survive.

“Last year, no one cared if you had a great innovation unless you had a bankroll to finance it,” he says. “Now is a better time to seek outside funding and go to market, as long as you have a good business plan, understand the market forces you’ll encounter, and accept the fact that this has to be a team endeavor.”

That team would combine scientific know-how with business acumen, which Polsky calls complementary knowledge bases and skill sets. “Too often, one or the other is lacking,” he adds.

“I was astonished by the energy,” Polsky says. “Students and scholars at the symposium were clamoring for information about how to start a science-based business. They lined up for business cards, which led to several contacts.

“The biggest hindrance to business development is inertia,” Polsky concludes. “To researchers and inventors at the University, I would say, â€˜pick up the phone.’ And that first call should go to UChicagoTech, an excellent resource.”